Backing his words, the President yesterday toured two manufacturing companies, Twine and Cordage (Private) Limited in Southerton, Harare, and Saint Gobain Construction Products Zimbabwe in Msasa where German and French investors are tied into Zimbabwean industries, boosting manufacturing capacity and quality, and thus able to push exports into Africa and beyond.

Consequently, this fulfils both their own company visions and Government policy as Zimbabwe upgrades its manufacturing base.

The President noted the rising foreign investment in the two companies as a sign of growing confidence in Zimbabwe and national policies.

Saint Gobain manufactures lightweight building materials and rhino board for lining applications and tile adhesive, among other products.

The Zimbabwean operations were founded in 1959 as Gypsum Industries.

Twine and Cordage is a diversified company that produces value added cotton yarns, cords and synthetic polymer products, tobacco twines (used for hanging tobacco during curing), and fishing nets, among others.

Speaking after the tour at Twine and Cordage, President Mnangagwa said his administration remained committed to facilitating increased production, productivity and profitability of entities across all sectors of the economy.

The company exports to South Africa, the United Kingdom and Canada, among others. 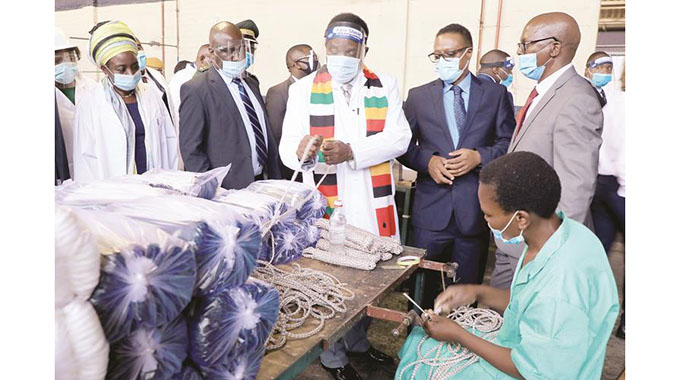 President Mnangagwa gets a feel of a rope produced at Twine and Cordage Manufacturing during a tour of the company’s plant while Minister Nzenza (far left), the company’s production director, Mr Shadreck Muhoni (far right) and sales director Salie Khan (on the President’s immediate left) look on in Harare yesterday. — Pictures: John Manzongo and Tawanda Mudimu

President Mnangagwa said the African Continental Free Trade Area (AfCFTA) provides an opportunity for local companies to penetrate continental markets and challenged Twine and Cordage to increase its products range and take advantage of the treaty.

Measures adopted under the Transitional Stabilisation Programme and the foreign currency auctions had brought macro-economic and price stability and improved availability of locally produced goods.

President Mnangagwa said Government was already crafting the National Development Strategy-1, a successor programme to the TSP that will run from 2021 to 2025 and will consolidate the gains.

“In light of the World Trade Organisation rules, ways are being pursued to promote industrial growth through the local content policy. This will consolidate the benefits associated with backward and forward integration by encouraging the use of locally available raw materials. Under the Second Republic, we will not perpetuate the culture of sundry importation of products which can be produced locally,” he said.

Government, said the President, would continue supporting cotton production through the Presidential Input Support Scheme while the Cotton-to-Clothing Strategy, which is part of the Zimbabwe National Development Policy, would be speeded up.

“I am informed that this company (Twine and Cordage) is a beneficiary of Government’s import substitution policy. Your availability, growth and profitability will undoubtedly contribute to lifting the standards of living of our populace and the achievement of development which leaves no one behind,” said President Mnangagwa.

The company’s sales director Mr Salie Khan thanked the Government for the policies implemented to support industry and called for more incentives that include subsidised fuel for exporters, reliable supply of electricity and increased access to foreign currency.

At Saint Gobain, President Mnangagwa said the construction industry and the built environment was an important indicator of the levels of investment and economic activity within any country.

“It is most commendable that Saint Gobain Construction Products Zimbabwe has consistently invested in Zimbabwe. Its growth target and resultant continuous expansion attests to the confidence that the company has in the development potential of Zimbabwe.

“The company expanded its product range as well as the use of latest state-of-the-art technology and equipment. This has resulted in increased production and productivity capacities of the entity thereby contributing towards the modernisation and industrialisation of our economy with regards to competitiveness of our construction industry and related value chain industries.

“My administration has put in place plans to grow exports by US$7 billion by the year 2023,” he said.

President Mnangagwa said he was confident that the National Trade Policy, aimed at growing exports to US$7 billion 2023, would be a reality.

President Mnangagwa applauded the company for its efforts in empowering youths through skills transfer, especially at Danhiko Secondary School, Msasa Vocational Training and Kushinga Pikelela, among others.

Industry and Commerce Minister Dr Sekai Nzenza said Saint Gobain had shown a commitment towards the attainment of Vision 2030 and was positively contributing to Zimbabwe’s industrialisation agenda.