Traditional grains are famed for their high nutritional value, medicinal properties and drought tolerance which makes them easy to grow even in drought-prone areas.

Participants from different parts of Matabeleland North like Binga, Hwange and Lupane, to name a few, yesterday exhibited traditional dishes which showed a lot of ways through which the highly nutritious grains can be packaged to unlock their value.

The First Lady spent the better part of last year handing out seed packs of millet, rapoko and sorghum to various communities as part of her well calculated move to promote their cultivation and consumption.

Yesterday’s cookout traditional meal competition which was held at Lupane State University, drew 20 participants from all the districts in the province who included the elderly, women from different churches and chiefs’ wives who showcased some innovative ways through which traditional dishes can be made more appealing to young people who due to lack of knowledge viewed indigenous food as inferior.

She said men were given Ngogo, which is porridge made from a mixture of fresh cow milk and millet meal. To get the healthy milk, they let a calf suckle from its mother before they remove it, milk the cow and prepare the porridge for men.

That porridge enhances men’s masculinity and ability to withstand diseases. 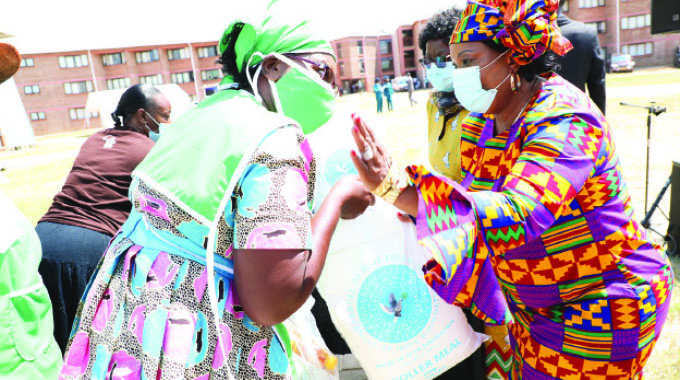 On the other end, women are given Isnikwa, a mixture of roots of a tree called nhevu, berry tree roots, fresh mealies, sweet can, groundnuts, round nuts, pumpkins, millet meal to which they add ash and soak over night.

“In the morning you drain the ingredients and take the water, mix with millet meal and make porridge which is then given to women.

“You then take the ash and make everyone have a bite. This helps make women strong, fight disease and make them warm bodied.”

Mrs Nhekatambe also prepared mnyii bread where one soaks the mnyii fruit, pound it to remove the seed and mix with millet and water which was used to soak to make dough.

“You then spread millet stalks in a pot, add the dough, boil till the water is finished and you get mnyii bread,” she said.

Mrs Nhekatambe also showcased herbs like Ibhundi powder from bhundi tree roots. The powder is soaked in water and taken as a drink to add water in the body and reduces dehydration.

She exhibited Unhutulungwa herb which she said the water from the soaked roots relieve constipation. Also the powder from the dried roots, mixed with salt, she said also cures swollen tonsils and bleeding gums.

Leaves of the Zakaranda tree which was exhibited can be crushed mixed with water and drunk to boost immunity.

The powder from the crushed leaves can be used as a spice in while the leaves can serve as tea leaves. 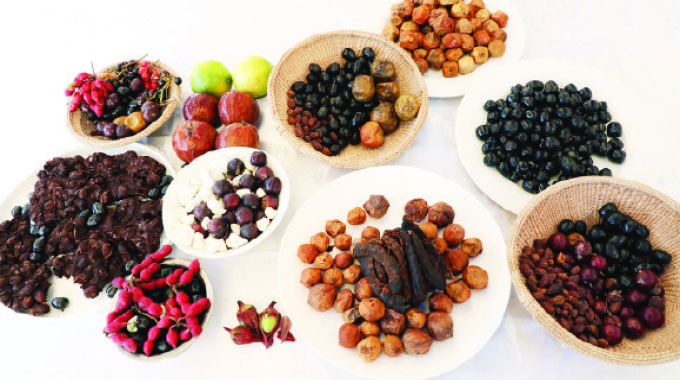 Some of the dishes prepared during Amai’s traditional meal cook out competition in Lupane yesterday. — Pictures: John Manzongo

On the Imhondo tree, one can take the seeds, add ash, salt then boil and drink the water.

It helps with eyesight.

The First Lady also heard that dried leaves of Umtunzwana tree make tea, while fresh pumpkins mixed with muzhambe tree roots, leaves and boiled, the mixture can be smeared on foreheads to prevent headaches.

An elderly woman from Binga also prepared Nhongo made from sorghum which is soaked in hot water overnight. The following morning the water becomes a thick mixture which is then added crushed groundnuts and becomes relish for sadza.

There were cucumber vegetables made from dried yellow cucumbers that were sliced and had seeds removed. They were cooked, added to tomatoes and ate with sadza. Other dishes prepared include Sadza from sorghum, millet, rapoko, sorghum cake, millet bread, pearl millet cake, pearl millet scones, road runner, quails, birds pumpkins and fried okra.

All the contestants were given food hampers by the First Lady that included Angel of Hope Foundation mealie-meal, cooking oil, sugar, rice and laundry soap.

“Your excellency it is your commitment to ensuring that our traditional ways of preparing food are preserved and handed down to the next generation that we so admire.

“These competitions which are being held throughout the country’s provinces show that Zimbabwe is indeed rich in traditional food. Amai you are a role model as you lead from the front. The National Development Strategy (NDS1) indicates diversification of food production and consumption as one of the strategies of ensuring food security,” he said.

Minister Moyo expressed hope that the cookout traditional meal competition would encourage the growing of traditional grains which would improve food security in Matabeleland North which is prone to drought.

On a lighter note, Mrs Agnes Nyathi, the wife of Chief Pashu from Binga said the competition could not have come at a better time as some women were being sent-packing for failing to prepare meals which endeared them to their husbands.

“On behalf of the chiefs’ spouses here in Matabeleland North, we thank you for taking us back to our roots where we derive all the health and nutritional benefits of traditional meals. When I did research in Binga I discovered that most young women were being dumped by their husbands owing to failure to prepare traditional dishes. Men enjoy well-prepared dishes and not half-cooked meals full of oil. I am happy that I heard youngsters reciting poems in praise of traditional dishes. We thank you for bringing back these dishes because us as the elders were poisoning our children by not exposing them to the dishes,” she said to applause.

Amai Mnangagwa said the competitions sought to revive traditional meals and carry them forward because of the immense benefits they have.

“I have come here to see what you are showcasing in terms of our traditional foods depending on districts. The aim of this programme is to revive our traditional meals. Some of us were now shunning our healthy and medicinal traditional foods. Here I have seen different types of foods and you have told me how they benefit us. I want to promote and bring a new culture of village tourism.

The mother of the nation said she started the programme in 2019 when she launched the culture and food festival.

She said she had introduced village tourism wherein people visit and host each in different parts of the country like those from Masvingo hosting their peers from Kariba and get to appreciate their culture, dishes and way of doing things.

Amai Mnangagwa thanked the Chiefs wives for spearheading her programmes and being involved like in the cooking competition where they are taking part.

“Let us put our heads together as women and help our children to appreciate our traditional dishes and mould their morals and values. Our children have become naughty but it has to start with us parents teaching them to walk in the right path,” she said.

“Let us love our country and utilise the resources God gave us. Above all let us unite as a nation and love one another. We came from Easter and God died for our sins, but we continue committing sins. Let’s love one another and stop doing evil and pray for our families, neighbours, communities and the nation at large.”

She said Covid-19 was still a menace and implored people to be vaccinated to protect themselves from the killer pandemic.

“With vaccination, coupled with our traditional foods, we will win the fight against Covid-19” she said.