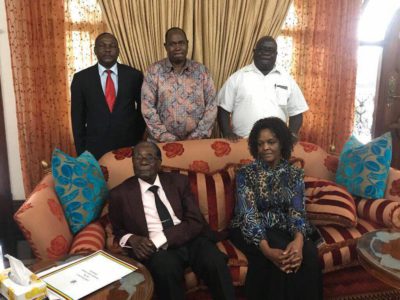 purported to have been taken just before the nonagenarian signed his resignation letter on Tuesday – has gone viral on social media.

This is the first picture that has emerged since Mugabe stepped down.

The picture shows Mugabe and his wife with the veteran leader’s “friends”, including the country’s former reserve bank governor Gideon Gono.

Writes social media user @mtyala: “Grace looks like she hasn’t slept in days, the arrogance wiped from her face. What’s “stress” in Shona?

A report by AP on Thursday said that Mugabe had not been seen outside a few photographs since his stunning speech to the nation on Sunday night in which he defied calls to step down.

Mugabe was said to remain in the capital, Harare, with his wife but it was not clear under what terms. Some were wondering whether he had secured guarantees of protection, including immunity from prosecution, the report said.