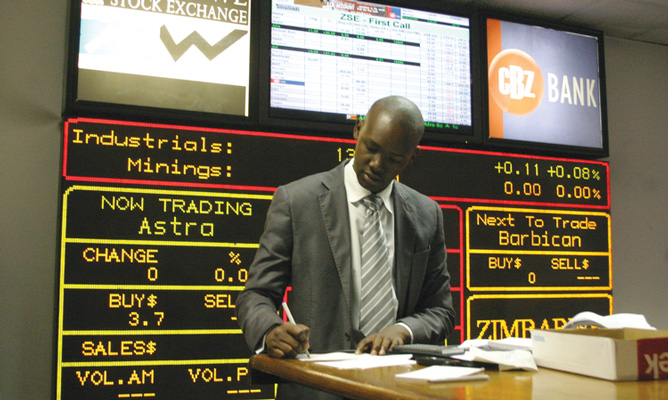 FOREIGN investors spent US$104 million in the five months to May 2018 from US$21 million in the same period last year on the Zimbabwe Stock Exchange (ZSE), official data show.

The growth reflects a 399% jump on last year’s numbers, but market watchers say this is not new foreign money. Analysts say these funds are part of the money foreign investors are struggling to remit to offshore destinations which is often reinvested back into the market.

The central bank is failing to meet import obligations owing to a current account deficit that has seen the country’s nostro balances being depleted.

There was, however, a slight increase in the quantum of stocks amounting to US$59 million up from US$47,3 million in same period last year. This comes as companies are struggling to remit dividends to foreign shareholders due to the foreign currency shortages.

ZSE acting CE Martin Matanda told businessdigest recently that an upsurge in foreign investment on the ZSE, post-election period was expected if the July 30 election results were acceptable.

“The level of trading by foreign investors has improved, suggesting confidence returning, but we are in election season. We believe that there are many investors sitting on the fence and we might see an increased level of foreign trading activity post-election if the election results are favourable. Stability post the period will imply more foreign investors trading on the ZSE,” he said. On the general market performance, Matanda said there has largely been uncertainty associated with this period. The market gave up gains for the first time in four months, declining by 4% to US$9,885 billion from the US$10,393 billion recorded as at 31 May 2018.

“Upon take off of the new administration, we saw the market dropping subsequently and it was a market correction which continued in Q1 2018. The market continued to weaken. We saw from April the market going up again, signifying the return of that uncertainty and people trying to take shelter against some issues that could probably arise prior to the election. There has been weakening recently, indicating just profit taking. Normally periods prior to election are characterised by uncertainty and we expected it during this particular time,” he said.