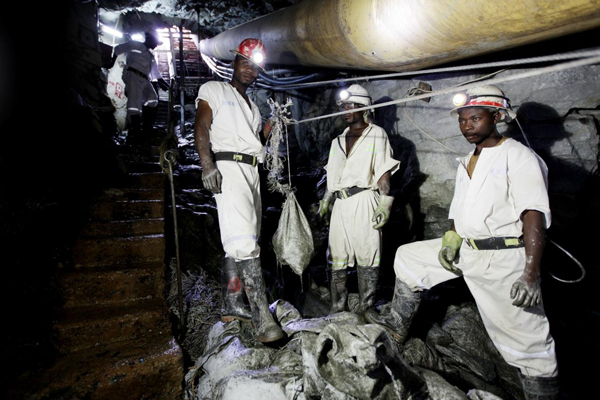 BY SHAME MAKOSHORI
ZIMBABWE’S mining industry warned Friday that a contentious foreign currency retention policies pursued by the Reserve Bank of Zimbabwe (RBZ) in the past decade has become the biggest threat to implementation if greenfield projects and growth of existing operations.

Under the RBZ’s foreign currency retention policy, miners get 60% of their export earnings in United States dollars.

The remaining 40% is then released in the fast-depreciating Zimbabwe dollar at prevailing official exchange rates.

Miners say many operations have relapsed into serious cash flow problems as the component of earnings coming through a currency that has been battered by relentless exchange rate crises is too huge, and they cannot do much with a currency in free fall.

Chamber of Mines of Zimbabwe president Colin Chibafa told the organisation’s annual mining conference in Victoria Falls that many projects are at development stage — the phases that guzzle more forex — and government much chip in with improved thresholds.

Chibafa called upon RBZ governor John Mangudya to review the thresholds in order to give operators capacity to development mines and rebuild struggling mines.

“A significant number of our companies are in expansion mode and they need foreign currency to continue expanding. We call upon the Reserve Bank of Zimbabwe to review these thresholds,” Chibafa added, as he assured authorities that work already carried out in the past three years had given the sector impetus to achieve a US$12 billion mining economy announced three years ago.

The sector is projected to reach the threshold in 2023.

Chibafa said his confidence stemmed out of current investments into new mining projects such as the relaunched Eureka Gold Mine in Mashonaland Central, along with lithium projects and others.

“Our country stands to benefit from the expansion of the industry. The US$12 billion mining industry by 2023 is assured,” he said.

“We are encouraged by government’s efforts to create market confidence. Thank you for the suspension of the 15% beneficiation tax for platinum mines.”

The 15% tax was meant to force platinum miners to establish domestic refineries, but was dropped before coming into force two weeks ago.

But Mnangagwa’s demand at the conference that platinum miners must still establish local refineries in Zimbabwe could unsettle the industry.

He demand sanity in the mining sector, which has recently courted an outcry after serious land degradation across provinces.

“Don’t force me to apply draconian laws,” the president said as he officially opened the conference.

Most of the outcry has been ignited by a massive expansion in small scale god mining where lack of capital has seen artisanal miners creating huge mining pits which they abandon without reclaiming.

Still, output from Zimbabwe’s gold mines will rise to 60 tonnes in the next five years, generating US$3,5 billion at current prices, the Gold Producers Association of Zimbabwe at the conference.

The 60-tonne target would 74% higher than 35 tonnes of gold projected to be extracted by this year, and double 31,5 tonne of gold mined in 2021, Qhubeka Nkomo the association’s president said as the conference kicked off.

Until pandemic curbs rattled the industry in 2020, the mining  industry had been on an upward trajectory, scaling up output to 35 tonnes in 2018, from 3,6 tonnes at the height of Zimbabwe’s hyperinflation indued economic upheavals in 2008, according to Nkomo, whose presentation was a highlight of a special symposium on gold mining that ran during the conference.

Zimbabwe had laid out a tactical approach to keep its gold mines running during the upheavals in order to serve its faltering economy.

However, the bold decisions by foreign governments to halt global freightliners were felt on the domestic scene as Zimbabwe’s gold mines run on imported materials like chemicals.