Donald Trump is a contentious topic in Botswana, where the government is uneasy over a former leader’s harsh criticism of the American president. 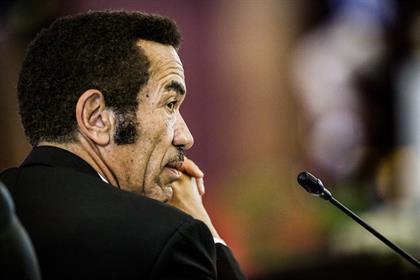 Donald Trump is a contentious topic in Botswana, where the government is uneasy over a former leader’s harsh criticism of the American president.

The spat pits Ian Khama, who stepped down as president in April after a decade in power, against the new administration of a country whose reputation as one of the most stable and well-governed in Africa has come under more scrutiny in recent years. Khama’s successor, President Mokgweetsi Masisi, last month acknowledged a wider dispute, saying the political transition in Botswana had not been “as smooth as expected”.

Khama was known for blunt talk as president and he hasn’t toned it down since leaving office. The former military commander ridiculed Trump during an Oxford University appearance in October, saying “the immaturity of the man is unbelievable” and “he’s the worst president America has ever had”.

On Saturday, Botswana’s foreign ministry said it was concerned about Khama’s “disparaging remarks” about Trump at Oxford and also recently at a traditional meeting in Serowe, a town in Botswana where Khama’s father Seretse, the country’s first president after independence from Britain in 1966, was born. Khama’s use of the meeting to “castigate a President of another country may be misconstrued as espousing an official position of the Government,” the ministry said in a statement.

While acknowledging that the former president has the right to express personal views, the ministry said Botswana and the United States enjoy good relations “based on common understanding and mutual respect”.

On its website, the US Embassy praises Botswana’s democratic record and says US priorities there including combating HIV and Aids, co-operation with “one of the most professional militaries on the continent” and support for the fight against wildlife trafficking. This month, the Trump administration announced a sharp refocus of its Africa strategy to counter what it called the “predatory” practices of China and Russia, and said the US will now choose its African partners more carefully.

On Facebook, Khama said he didn’t claim to be representing Botswana’s government when he made recent remarks about Trump. He said that, as president, he had criticized other countries where poor governance and violations of democratic principles and human rights occurred.

“The Ministry is free to abandon those principles and ignore Donald Trump’s present and past disrespectful tendencies which he clearly displayed in the manner sometime ago, in the way he referred to countries in Africa,” Khama said.

He referred to Trump’s reported comment earlier this year about “shithole countries” in Africa, describing it as “insulting and racist”.

During his presidency, Khama urged Robert Mugabe to quit as the longtime leader of neighbouring Zimbabwe, well before Mugabe, now 94, was forced from power after a military takeover in November 2017. In contrast, many African nations refrained from criticising the Zimbabwean leader despite the country’s deterioration during his rule.

The dispute over Khama’s remarks about Trump comes amid tension that Masisi, the former vice president who succeeded Khama, said he had tried to resolve through mediation. Masisi did not allow Khama to use state air transport, and prevented a former intelligence chief from becoming Khama’s private secretary, according to media in Botswana.

“There is in place legislation that governs the benefits and entitlements of former presidents,” Masisi said in a state-of-the-nation address in November. “I have no intention whatsoever of breaking the law.”

Chances are that Khama will continue to speak up. He joined Twitter last month.

Newer Post
Zimbabwe leaders spilled too much blood – country can never be blessed!
Older Post
Zim’s odyssey into darkness, the 2019 ‘no’ promise