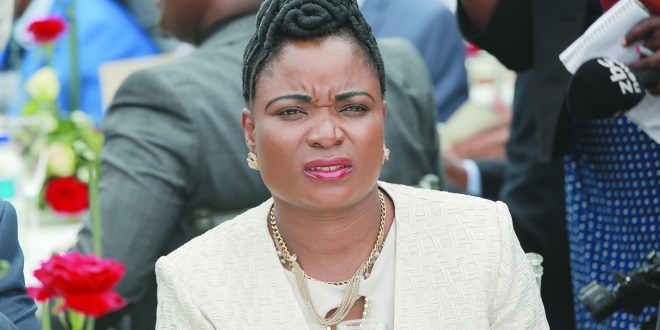 THE government is probing former Labour minister Petronella Kagonye on allegations of improperly acquiring six farms in Mashonaland East under her real estate firm, Glorious Properties.
On her part, Kagonye described the investigation in an interview with the Daily News yesterday as a “smear campaign” by her detractors.

“I feel there are people who have personal issues with me. There have been attempts to soil my name. I have nothing to do with those farms,” she said.

However, documents in the possession of the Daily News allege that Kagonye used her influence when she worked in the Lands ministry a decade ago to improperly acquire the vast tracts of land in question — before she joined active politics.

A one time deputy minister of Transport before she was purged from government at the height of Zanu PF’s ugly tribal, factional and succession wars in 2014, Kagonye later bounced back as Minister of Labour for a brief period between December 2017 and July 2018.

Recently, she participated in and lost during Zanu PF’s chaotic district co-ordinating committee (DCC) elections in Goromonzi. According to the documents in the Daily News’s possession, some of the contested farms are allegedly registered in the names of Kagonye’s family members.

“Glebe Farm in Goromonzi is registered under Stanley Kagonye, Umritsur Farm in Chabwino and Entiors Farm in Ward 21 are registered under Kagonye, Woodley Farm in Melfort is under Johannes Kagonye, Alderley Farm in Arcturus is under Austin Kagonye, and Banana Grove is under Isiah Kagonye,” the documents put together by the Ministry of Housing and Social Amenities say.

Apart from the six farms, it is alleged that Kagonye is also claiming ownership of the vast 598-hectare Hofmoor Estate. “As of now, Kagonye says she owns the Hofmoor Estate. She says it was allocated to her by the government,” the documents state further.

In addition, it is also claimed that Glorious Properties owns a vast portfolio of residential land in Ruwa, Caledonia, Arcturus, Mara and Mandalay Park. Further, the documents claim that the former minister is also allegedly involved in wars to control another six farms in Ruwa.

“The ex-minister is fighting to control Mara, Hofmoor Estates, Rosemary, Green Sykes, Capital Foods and Clovedales farms. All these farms are in Ruwa,” the report alleges. Kagonye is also alleged to be at the centre of a tussle to control a freehold property measuring 40 827 hectares that was said to have been bought by a company called Mashonaland East Tobacco Graders (METG) in June 2011.

In a formal complaint to the Zimbabwe Anti-Corruption Commission (Zacc), METG director Samson Chauruka said Kagonye “systematically and knowingly abused her political influence in a bid to grab the property”.

“She has systemically contrived through a carefully orchestrated racket by hook and by crook, violent dispossession, brute force, blatant thuggery and political scheming to exploit grey areas within the context and intent of the land reform programme to personally and fraudulently go on an unbridled primitive accumulation of vast tracts of land and wealth,” Chauruka wrote.

However, Kagonye described Chauruka’s claims as another “smear campaign” aimed at destroying her character. “The Mashonaland East tobacco farm that Chauruka says I want to grab from him is just 40 hectares. Chauruka has been using the media to try and soil my name … what power do I yield now eight years after I left the Lands ministry?” she asked.

This comes after authorities said recently that 15 land kingpins, as well as 5 000 “smaller land barons” were in possession of 80 percent of residential land space acquired using dubious methods.

Newer Post
I never thought of Zimbabwe as a haven of stability. This year, I finally could
Older Post
Police recover US$700K from heist