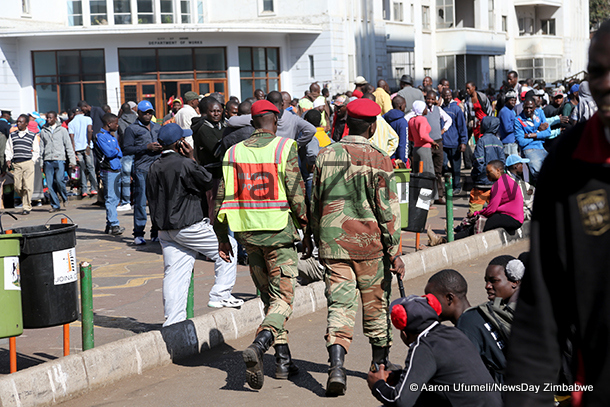 BY SHARON BUWERIMWE
CIVIL society organisations and opposition party members yesterday demanded that the army must stay in the barracks and not interfere with the forthcoming 2023 general election as it does not have a role in political processes.

This came out during a Zimbabwe Democracy Institute (ZDI) discussion on key electoral reforms, gaps, demands and strategies as the country heads for the by-elections in 2022 and the harmonised elections in 2023.

In past elections, the army has been accused of working in cahoots with the ruling Zanu PF party, as well as participating in the closure of constitutionalism and democratic space in the country.

Since the formation of the main opposition MDC in 1999, top army officials have made utterances on several occasions, some of them to the effect that they would not salute anyone without liberation war credentials.

Speaking at the ZDI discussion yesterday, political analyst Ibbo Mandaza said a free and fair election would be impossible under military rule.

“We have a crisis of legitimacy in Zimbabwe. Zanu PF leaders refuse to move out of power, and when they lose, they seek ways to retain power. Look at (the late former President Robert) Mugabe, since 2000, he used the military. When President Emmerson Mnangagwa noticed that he lost presidential elections with 33%, the military went into action the following day,” Mandaza said while reffering to the August 1, 2018 bloodbath that saw six civilians gunned down by soldiers during electoral protests.

Mandaza said CSOs and other political parties should push for constitutionalism and the rule of law to avoid disputed elections.

“The military has been involved in the Zimbabwe Electoral Commission (Zec) since 2000 because the major objective of elections is to simply legitimise, or to seek legitimacy for a largely illegitimate regime and illegitimate elections,” he said while calling for the de-militarisation of Zec.

MDC Alliance vice-chairperson Job Sikhala concurred, saying:  “The involvement of military in politics started in the 1990s. We have the abuse of the military in our politics. They are deployed by their superiors. In every election, those who are eating deploy junior officers to go and harass citizens.”

Zanu PF information director Tafadzwa Mugwadi instead blamed the media for inviting the military into the streets during elections.

“We need to have faith in these institutions rather than being subjective. We know exactly that the military is not involved in that way. Some people have been vocal, spreading false news about the military. On August 1, the military was in the streets because of false
information on social media platforms,” Mugwadi said.