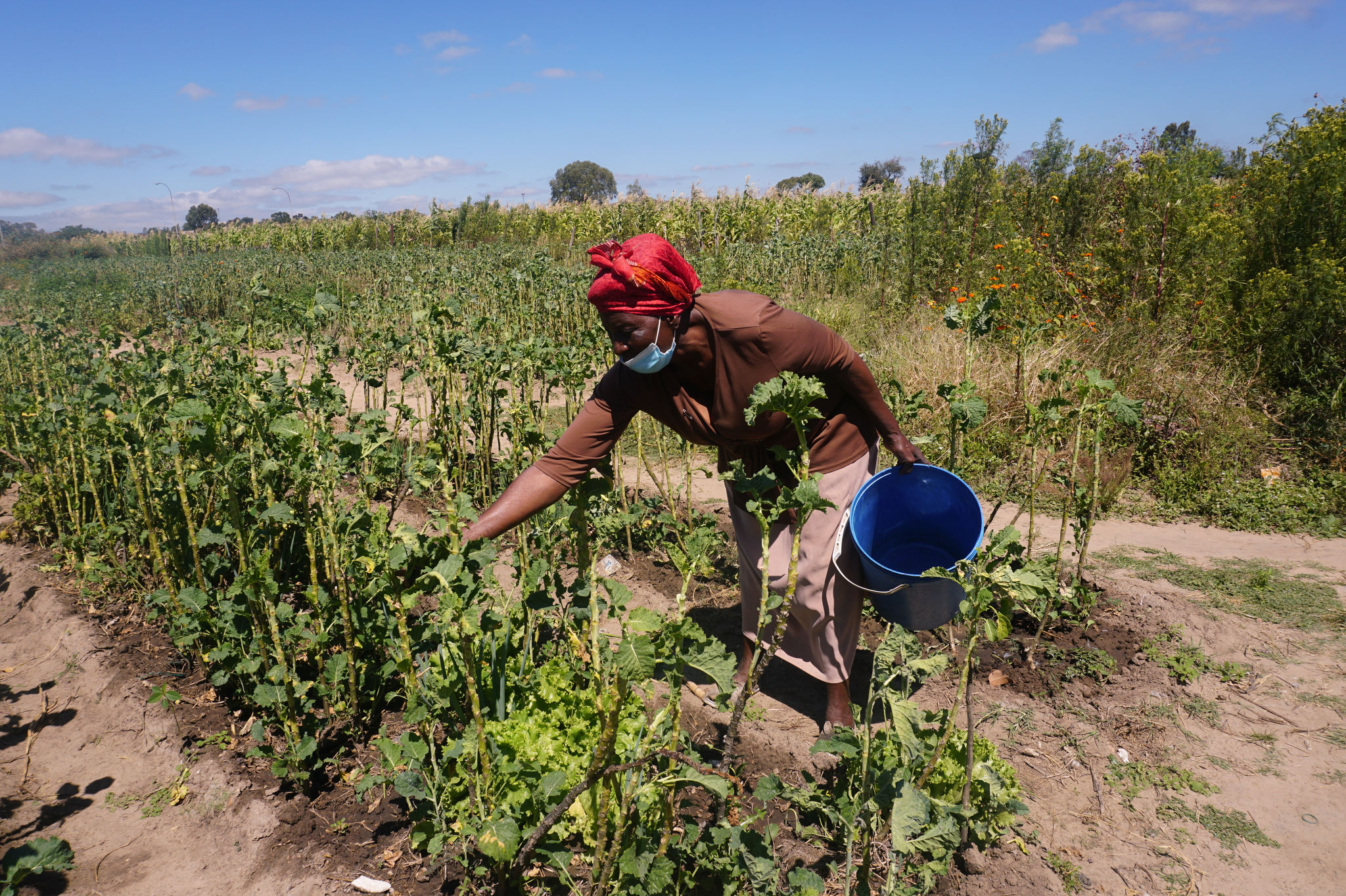 Edith Hove prunes yellow leaves off her vegetables, which she grows in a community garden in Bulawayo, Zimbabwe. (Fortune Moyo/Global Press Journal)

This story was originally published by Global Press Journal. https://globalpressjournal.com/africa/zimbabwe/subsistence-small-business-zimbabwes-gardeners-hit-pay-dirt/

BULAWAYO, ZIMBABWE — Edith Hove wasn’t sure how she was going to pay her bills. It was March 2020, and Zimbabwe had just retreated into its first coronavirus lockdown. Hove, 65, is the primary caretaker for her grandchildren, ages 10, 15 and 17. She sold secondhand clothing at a market, but like so many forms of commerce, that was no longer allowed.

But six years earlier, Bulawayo officials had granted Hove five vegetable beds in the community garden near her home in the suburb of Emakhandeni. There, about 60 families tend to their patches with water from a borehole, wide-brimmed hats shielding them from the unforgiving sun.

In her 5-by-1-meter (16-by-3-foot) beds, Hove grew basketfuls of choumoellier — a type of kale — and other leafy greens. The harvest mainly fed her family, though she’d usually sell at least 85 Zimbabwean dollars’ (ZWL) ($1) worth of vegetables a day. But during the lockdown, Zimbabweans were banned from traveling more than 5 kilometers (3 miles) to buy food, medication and household goods. Many people could no longer go to vegetable markets in the city center.

Suddenly, Hove’s yield was no longer a side hustle. “Because people were restricted from traveling to the city center, community gardens became their vegetable shop,” she says. Hove started selling as much as 5,950 ZWL ($70) worth of vegetables a day — more than she’d made selling clothing.

As the pandemic stretched on, Zimbabwe lifted coronavirus restrictions, then reimposed them. Hove’s profits dipped, but not by much. While Bulawayo officials don’t tax or track sales at community gardens, they say that, anecdotally, beds across the city have turned into moneymakers.

The transformation was as surprising to the community gardeners as it was welcome. Many urban areas in the region are dotted with collective fields, partly as a response to breakneck growth. In Zimbabwe, their widespread adoption coincided with the country’s economic freefall in the 2010s, according to a study in the Journal of Social Sciences and Humanities, which is published by the National University of Malaysia.

Thieves and vandals also ruin harvests; choumoellier is among the most popular vegetables, in part, because it regrows quickly. To combat mischief at the Emakhandeni garden, a committee patrols it at night, says Edmore Majama, who oversees the beds.

Before the pandemic, community gardeners primarily stocked their own pantries. According to a recent survey by the Zimbabwe Vulnerability Assessment Committee, 19% of urban Zimbabweans grew their own crops, but only 1% said selling vegetables was their main source of income.

“Initially, the community gardens were meant to sustain families at household levels,” says Pilate Moyo, a Bulawayo councilor. “The pandemic has surprisingly showed us that the gardens also have the capacity to address poverty alleviation in the community.”

Local families needed the help. In 2019, close to 40% of Bulawayo household heads were unemployed, according to the Famine Early Warning Systems Network, a United States government initiative to track food insecurity. A quarter of household heads worked in the informal sector, as street vendors, for example.

The pandemic walloped these residents; few had money saved, and they faced higher prices for water, electricity, maize and vegetables, the famine warning network report says. People stood in long lines to collect water. They stoked fires to stay warm. They skipped meals. But many gardeners were spared economic strife.

“Urban agriculture has helped in poverty alleviation for low-income families and those from vulnerable groups,” says Winston Babbage, vice president of the Zimbabwe Farmers Union.

An Emakhandeni gardener, Duduzile Mpofu long struggled to pay school fees for her children, ages 6 and 12. The lockdown scuttled her business selling bananas and oranges, but her community vegetable bed kept her afloat; some days, she made three times as much selling spinach and tomatoes as she did before the pandemic. “I have managed to pay my children’s tuition fees for two terms,” the 38-year-old says.

Because the gardens are convenient for suburban shoppers, local officials expect them to remain viable businesses after the pandemic abates, says council spokesperson Mpofu.

“Communities have begun to appreciate community gardens and the fact that they do not have to travel to the city center to get fresh vegetables.”

Success prompted Hove to diversify her harvest with tomatoes and onions. She also bought six goats with her earnings — a herd that has since multiplied to 15. Once the pandemic ends, Hove plans to sell clothing again, but she expects most of her money will still sprout from the soil.