‘Give young people space to shine’

Source: ‘Give young people space to shine’ | The Herald

Young people are the future and the Second Republic will give them space to explore, invent and leapfrog the country’s modernisation and transformation towards Vision 2030 to become an upper-middle income economy, the President has said.

Launching the National Fuel Management System, which will ensure better monitoring and regulation of various aspects of the fuel sub-sector, including its procurement; importation; delivery; sale; storage, general consumption trends and patterns, President Mnangagwa yesterday said his administration had created an environment for young people to shine.

With young people at tertiary institutions having been given innovative hubs as part of the President’s vision contained in Education 5.0, which places institutions of higher learning as the catalysts to problem-solving and innovation, the system was developed by the Harare Institute of Technology (HIT) and will ensure efficiency and accountability in the management of the country’s fuel supplies.

“Why today and why not yesterday? Because yesterday we did not allow young people to show their talent, but today we are doing so and the country is benefiting. The outstanding ingenuity, collaborations and partnerships and exemplary work ethic demonstrates that our nation is on an irreversible course towards modernisation, industrialisation and economic prosperity,” the President said.

President Mnangagwa — who is the Chancellor of all State universities — said the innovative fuel management system came at an opportune time as the country was witnessing an increase in demand for fuel due to rapid infrastructural development projects taking place nationwide.

“The innovation dovetails with our aspirations under SADC’s 2063 Industrialisation Strategy and Roadmap. The development of this system confirms the abundance of the unexploited competencies and skills within our great country.

“Based on these types of capabilities, the knowledge, innovation, science and technology-driven national development agenda will soon be realised,” the President said.

Zimbabwe, under the leadership of President Mnangagwa, has defied odds such as the Covid-19 pandemic and natural disasters to be one of the fastest growing economies in the world.

The country is using a clear roadmap laid in National Development Strategy (NDS1) which places emphasis on Information Communication Technology, with universities central to the breeding of fresh ideas.

“The system we are launching today is part of my Government’s efforts to ensure a technologically-driven economy, which mainstreams ICTs as an enabler for sustainable socio-economic growth.

“The adoption of smart technologies, underpinned by the needs of the Fourth Industrial Revolution, must see us becoming a highly competitive economy. In this regard, I applaud the Harare Institute of Technology for embarking on the construction of the Multi-Laboratory Research Plaza. The plaza will act as a platform for the convergence of high-end technological research, feeding its outputs into the Innovation Hub, for eventual industrialisation and commercialisation of ideas and innovations”. 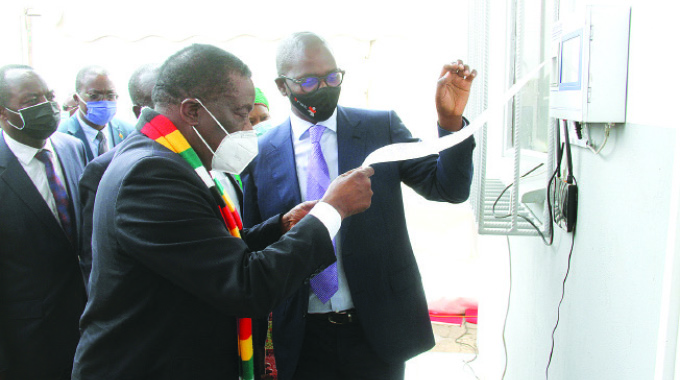 The President said his administration stood ready to support universities that had transformative ideas such as the Fuel Management System that was launched yesterday in Harare.

“The system will equally help the Government in the regulation of national fuel demand and associated fuel resource allocation. In addition, it is also a useful decision-making tool, which provides real-time information and the judicious management of fuel resources, from the service station right up to the national level.

“This solution must, therefore, be quickly and widely rolled out to all stakeholders to enhance greater efficiency, accountability and transparency within the sector.

“At the regional level, the integrated system will go a long way in engendering seamless transportation of fuel and its passage through our ports of entry. It further helps validate in-transit fuel tankers passing through our jurisdiction,” the President said.

With such a watertight fuel monitoring system in place, the President said criminal elements would have little room to divert supplies and urged those in the crucial sector to stick to good corporate practices.

“Riding on the prevailing and favourable stability in the fuel sector, I exhort market players to always pursue business and trade practices within the confines of the law. Arbitrage and other unethical behaviours, which are counter-productive, hold back our collective aspirations to keep the economy fuelled, oiled and energised.

“I commend Trek Fuel Private Limited for being a pioneer supporter of this initiative. All other players in the sub-sector must take a leaf from Trek and equally support this and other modernisation and industrialisation programmes instituted by the Government,” he said.