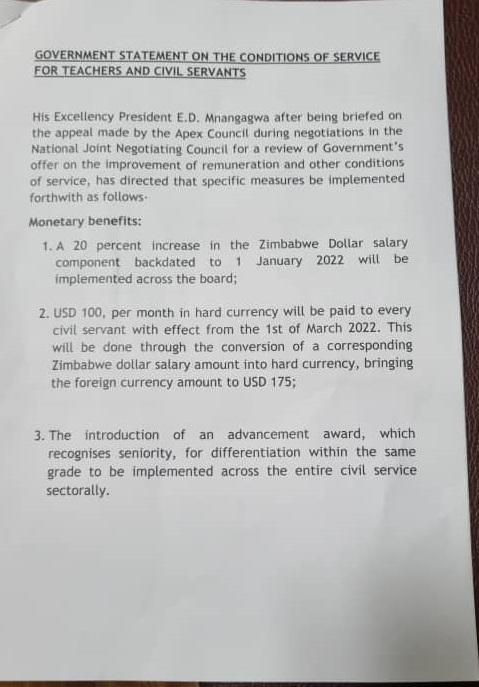 BY NQOBANI NDLOVU
PRESIDENT Emmerson Mnangagwa has directed that restive civil servants be given a 20 percent salary increase plus US$100 beginning next month and other non-monetary benefits such as paying tuition fees for their children.

The latest offer announced Tuesday evening by government comes after teachers refused to report to duty on Monday when schools reopened for the first term citing incapacitation.

Teachers and other civil servants have been demanding pre 2018 US dollar salaries when they used to earn over US$500.

In fear that the strike by teachers will spread to the rest of the civil service, the government in a statement said Mnangagwa had directed that state workers be given monetary and non-monetary benefits.

“A 20% increase in the Zimbabwe Dollar salary component backdated to 1 January 2022 will be implemented across the board. US$100, per month in hard currency will be paid to every civil servant with effect from the 1st of March 2022,” the statement read.

“This will be done through the conversion of a corresponding Zimbabwe dollar salary amount into hard currency, bringing the foreign currency amount to US$175.”

Government made a commitment to pay tuition fees for civil servants for three of their children with the figure capped at $20 000, provide a transport facility for teachers and allow them to import vehicles duty free.

Other short to long term interventions include ambitious plans to implement a housing loan scheme and construct 34 000 housing units for teachers within school premises in the next 5 years.

“Government remains committed to continue improving the conditions of service tor teachers and the entire civil service, as the economy improves,” the statement adds.