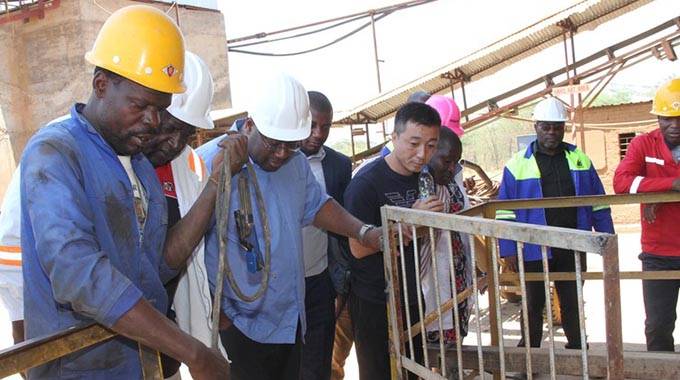 Mines and Mining Development Minister Winston Chitando (blue shirt) and inspectors from the ministry paid an unexpected visit at Timsite Gold Milling Company in Bindura where they later ordered the closure of the milling centre after it fell foul of mining regulations. — (Picture by Innocent Makawa)

Ishemunyoro Chingwere Business Reporter
GOVERNMENT has suspended operations at a gold milling centre in Bindura in what it warned was the beginning of a crackdown on milling centres it accused of underhand dealings ranging from understanding production to wanton disregard of basic tenets of safety.

Mines and Mining Development Minister Winston Chitando paid an unexpected visit at the milling centre located about 10 kilometres outside Bindura where he came face to face with workers who went about their business without the requisite protective clothing.

The minister and his delegation, which included the provincial mining director for Mashonaland Central and inspectors from the Ministry of Mines also saw first-hand workers exposed to the danger of electrocution as naked power lines were strewn around the milling centre.

“Today the Ministry of Mines has closed this (Timsite Enterprise) milling centre and the milling centre will have to work with officials within the Ministry to ensure that the areas of concern are addressed and only thereafter will they be allowed to resume operations,” said Minister Chitando.

Minister Chitando said the gold milling centre had not been submitting all monthly returns, while in cases where returns were lodged, when reconciled, did not match what was on the ground.

“In terms of safety standards, there is naked wiring where people are working, some of the working areas are not barricaded which exposes workers to danger (and) the workers are not getting protective clothing,” he said.

Minister Chitando warned that the crackdown will not start and end with Timsite Enterprise as Government was of the view that the problems were not confined to the Bindura based miller.

Government is targeting to grow the country’s annual gold deliveries from 24, 8 tonnes achieved last year to at least 100 tonnes annually in the medium term as a precursor to the attainment of upper middle income country status by 2030 as expounded by President Mnangagwa.

Minister Chitando is also on record saying that the 100 tonnes target will be achieved through a three pronged approach that includes capacitating small scale miners and cabbing shortages in the sector whose potential is being hampered by unscrupulous milling centres.

Also of major concern to Government, is the wanton disregard for mining laws by milling centres with the mines minister warning that all found on the wrong side of the law will be stopped.

“Any milling centre, which we suspect is involved in under declaration and which is not operating according to the required safety standards we will close it down as is happening here today.

The minister and his delegation were shocked when Timsite Enterprise managing director Mr Chris Sheng told them that for the whole of last year they had managed a return of three kilogrammes of gold and had so far this year managed just one kilogramme.