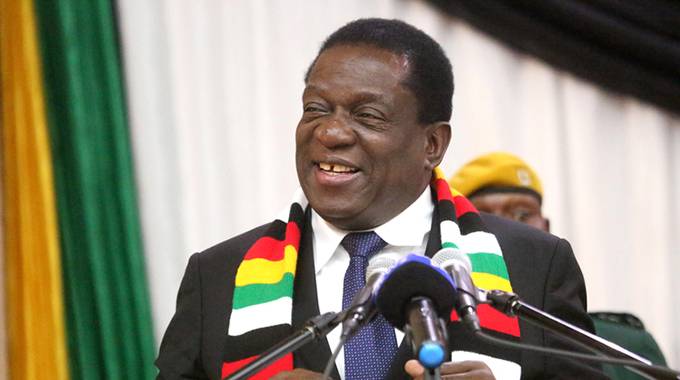 The President said this while officially opening the 2018 ZimTrade Exporters’ Conference in Harare.

The conference ran under the theme “Accelerating export growth for sustainable economic development”.

Zimbabwe wants to boost exports and fight the widening trade deficit, which rose by 34 percent to $1,26 billion between February to June 2018.

From February and June this year, the country imported goods and services worth $2,87 billion against exports of $1,62 billion, which has had the net effect of exporting foreign currency.

The penchant for imports, largely for consumption, has resulted in the miners, manufacturers and farmers struggling to obtain foreign currency to purchase spare parts, new machinery, raw materials and other key services, to ramp up production.

President Mnangagwa said he was aware of the foreign currency challenges and indicated that Government is working around the clock to address the issue.

“The Ministry of Finance and Economic Development and the Reserve Bank of Zimbabwe are working to ensure that critical imports are prioritised on foreign currency allocation.

“I appeal to industry to support the production of raw materials and industrial feedstock which can be sourced locally,” said President Mnangagwa.

He called for robust innovation, new cutting edge technological inventions and research and development initiatives across all sectors of the economy to help reduce production costs and enhance competitiveness of locally produced goods.

President Mnangagwa also said as the concept of devolution and provincial economies become a reality, industrialists and investors should take advantage of the immense potential within the various districts across the country and have at least one export product per district.

Zimbabwe has 10 provinces, which are broken into 59 districts.

The President also encouraged industrialists to leverage on the geographic and commodity-based Special Economic Zone (SEZ) framework to produce for exports.

Meanwhile, President Mnangagwa said since the country has achieved maize food self-sufficiency, it was time to deliberately focus on enhancing the production of other crops such as wheat, soya beans and cotton so as to expand exports.

“Stakeholders in the agricultural sector must develop business models which support a balance between production for both local and export markets.

“We need therefore to complement our agriculture productivity with high-value export products such as horticulture and livestock produce.

“My Government through the relevant ministries will ensure a comprehensive and coordinated approach to stimulate and modernise the entire value chains across all sectors,” said President Mnangagwa.

He also said there was need to embrace technological innovations for global best practices in production, processing, packaging and marketing to guarantee high quality synergies and competitive goods.

Government says infrastructure development in relation to irrigation expansion, energy, ICTs, road, rail and airports must not be viewed in isolation but fundamentally as enablers to the country’s productive capacity and entry into regional, continental markets and value   chains.