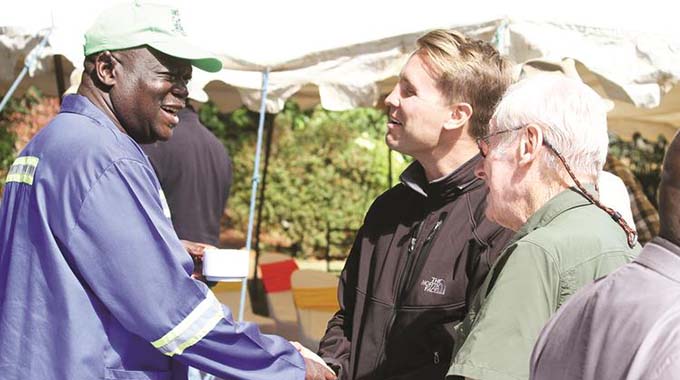 Minister Shiri said the engagement would allow Government to tap into the vast wealth of agriculture expertise that the remaining white farmers possess.

“As Government, we acknowledge and appreciate the various agriculture skills and farming competencies that are inherent in the operations of white commercial farmers,” Minister Shiri said.

“In his inaugural speech, President Emmerson Mnangagwa singled out the agriculture sector and charged it with the important responsibility to become the engine for socio-economic recovery and growth for Zimbabwe.

“It is mandatory for black and white farmers to work together in harmony towards formulating winning strategies to attain the breadbasket status for the country.

“It is also Government’s duty to ensure an enabling environment for business.”

Minister Shiri said security of tenure had caused loss of confidence among investors before the coming of the new dispensation.

“I am glad to inform you that constitutionalism and adherence to the rule of law are now the guiding principles in Zimbabwe. The current Government has zero tolerance to lawlessness,” he said.

“All our esteemed farmers are hereby given the assurances of the highest order that their investments are safe. Unlike in the previous regime, all leases for agricultural land have been gazetted for a period of 99 years.

“The 99-year leases are acceptable by banks as collateral and they are assisting farmers in securing loans. I encourage farmers whose land has been surveyed to apply for the 99-year leases.

“The new dispensation abolished the previous regime’s policy of giving white commercial farmers five-year leases. Those with five-year leases should surrender them and get 99-year leases which guarantee security of tenure and freedom to expand long-term investment without fear of time constraints.

“Resource constraints is one of the factors which caused delays in the issuance of the 99-year leases, but Government has set aside a reasonable budget towards capacitating the Zimbabwe Lands Commission and my ministry to expeditiously execute the process.

“Government acknowledges your renowned capability and business networks towards tapping into the regional and international export market. Government also appreciate the contribution of white commercial farmers in finding an alternative crop that replaces tobacco in the wake of a push to ban tobacco production by the World Health Organisation.”

He also advised those without land to scout for partners and get into co-operative farming arrangements.

Some of the concerns by the farmers were land degradation, deforestation and mining activities interfering with farming.

Meanwhile, Minister Shiri has urged farmers in Chiweshe to embark on cotton farming saying it brings vast opportunities that deal with employment challenges as well as foreign currency shortages.

He said: “As we are moving towards the revival of the cotton industry, we are also targeting places where we are introducing this crop for the first time as we are desisting from concentrating on traditional growers alone. These inputs are not a loan, it is the President’s desire to assist cotton farmers.

“We are urging more new cotton players since it is a foreign currency earner which creates employment opportunities in its whole line of production.”

Chiweshe area is known for its good climatic conditions which has seen the area lead in the production of the golden leaf.

Minister Shiri said the land reform programme would not be reversed simply because the country was re-engaging with foreign countries.