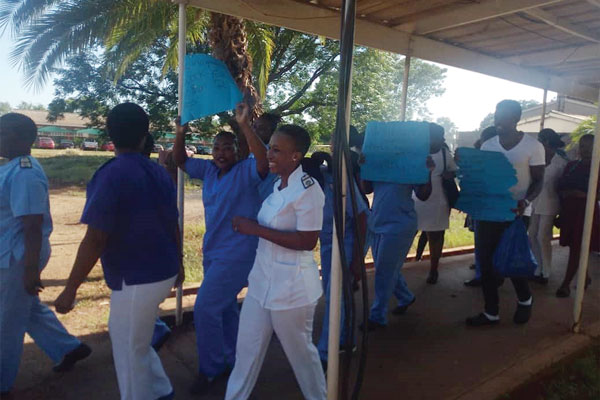 STRIKING nurses yesterday vowed to continue with their industrial action after government allegedly spurned their engagement efforts and ignored their call for decent salaries.

Zimbabwe Nurses Association (Zina) president Enock Dongo said government had not responded to letters from health workers seeking negotiations to end the week-long industrial action, amid reports that overworked doctors at public hospitals were also treatening to down tools.

“The government has decided to go on silent mode. They are not responding to any of us. We have tried to engage with them, but it seems they are not willing to co-operate with us,” he said.
“Nurses are not reporting to work. We are still on strike until the problem is fixed. Nurses were given $3 500 last month and it is already gone.”

Nurses declared a strike last Thursday, a day after government offered its restive workers a untaxed US$75 COVID-19 allowance and a 50% salary increase

The rest of the civil service has since rejected the offer, insisting on United States dollar-indexed salaries.

Dongo added: “The government does not care about Zimbabwe. People are dying in hospitals, with some being returned home without treatment and the government is not taking any action which just shows that they do not care about the health and well-being of the nation.

“We are not expecting a miracle and we are not expecting to be rich. We just need a normal living wage because we all know the economic situation in Zimbabwe, but we have been put into a corner.
“The public is not worried. People are not talking about it when patients are being sent home, which means more people are going to die. The public has to talk about these issues for the authorities to act.”