The first tractors under the US$50 million deal struck by Government with agricultural equipment manufacturer John Deere last year arrive in the next three months.

Government officials and representatives of John Deere met to finalise outstanding issues of the deal.

The company is expected to deliver 525 tractors in the coming three months valued at US$20 million. Government signed a US$50 million deal with John Deere last year that for the supply of 1 300 tractors.

The agreement followed a meeting by President Mnangagwa and John Deere Agriculture Worldwide president Mr Mark von Pentz, who registered his willingness to partner Government in boosting the agriculture sector through mechanisation.

Speaking in an interview after the meeting yesterday, the Director for Mechanisation in the Ministry of Lands, Agriculture, Water, and Rural Resettlement, Mr Rabson Gumbo, said the main outstanding issue was the provision of a letter of credit to enable release of equipment that is already offloaded in Durban.

Farmers that will benefit from the deal are expected to pay for the tractors with Agribank providing loans for the purpose. “We may for now break it into something like US$3 million but the order is for 525 tractors, that is for US$20 million. That means you have to break it down into tranches of US$3 million so that will be about seven tranches. 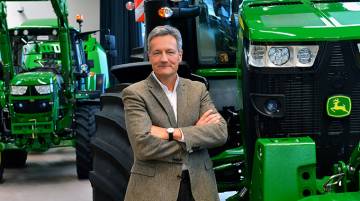 “We are now racing against time because there are a lot of costs that are being incurred in terms of demurrage charges in Durban. But we believe that all the seven tranches of the equipment would have been delivered in the next three months,” Mr Gumbo added.

“We met today to talk about one or two items that we still had to finalise for the transaction between the Government of Zimbabwe and John Deere to supply mechanisation equipment for Zimbabwe farmers.

“The meeting went on very well we were able to within a short period of time iron out the most outstanding items. It was really a positive meeting. The common denominator we have is that both Government and John Deere want to see agriculture production improve in Zimbabwe and the programme we are pursuing is going to help achieve that,” Mr van der Westhuizen said.

This deficit of farm machinery and implements has been affecting agricultural production and productivity, hence Government’s intervention in sourcing machinery.