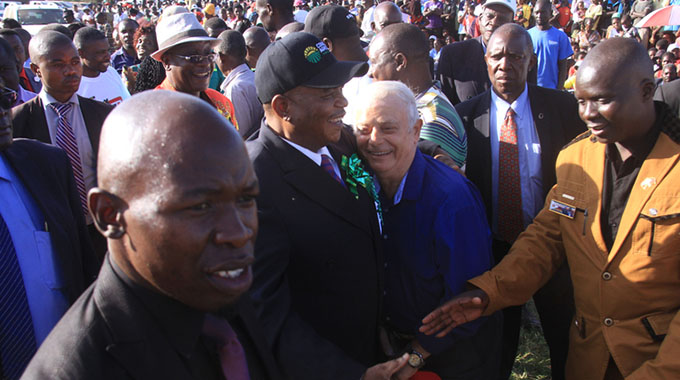 This comes as Government is also targeting to improve cotton production, which will lead to the setting up of inaugural cotton auction floors by the end of the year.

“A further 17 000 hectares will be funded by other contractors. A total of 67 000 is therefore targeted countrywide.”

At a conservative average yield of four tonnes per hectare, VP Chiwenga said Zimbabwe would realise 268 000 tonnes of wheat.

The country requires 460 000 tonnes of wheat every year and current efforts are expected to progressively increase production to wipe away the deficit.

VP Chiwenga said the irrigation support programme, which would see each district getting centre pivots to irrigate 200ha, would also go a long way in increasing wheat production at communal level.

This is part of a broader plan to ensure value addition at community level where confectionery shops and bakeries are to be opened.

He said Government had already mobilised inputs for the winter wheat programme.

“The bulk of the inputs for this season are already in the country and they should be distributed to farmers in time to optimise yield,” said VP Chiwenga.

“Comprehensive plans are also underway to improve wheat harvesting capacity to avert losses due to early rains as was the case last season.”

VP Chiwenga said farmers should start planting soon after Independence Day on Wednesday to reduce chances of the crop being destroyed by rains later in the year, and to increase yields.

To improve irrigation in the country, Government has lined up the Reserve Bank of Zimbabwe-funded Spain Centre Pivot Facility, the Sakunda-sponsored irrigation development scheme and the 200ha per district scheme.

This will lead to the realisation of President Mnangagwa’s target of 300 000ha of wheat under irrigation countrywide.

VP Chiwenga said the expanded Command Agriculture Programme would see the launch of pilot poultry production in Goromonzi next week and heifers were being mobilised locally for beef and breeding in Matabeleland.

Successes in maize production under the Command Agriculture Programme are expected to be replicated under the various programmes being spearheaded by Government.

“The white gold (cotton) must return to its former glory and we want it to surpass previous production levels,” he said. We have set up a committee comprising the Minister of Finance, Minister of Agriculture and the Reserve Bank to see that we can produce cotton.

“Starting this year, we want to start cotton production under Command Cotton to produce enough cotton.”

At least 265 000 tonnes of cotton will support the oil industry, lint and value addition which will also lead to the resuscitation of downstream industries such as the textile industry.

VP Chiwenga said if things go according to plan, there should be a cotton auction floor opened by the end of the year.

The auction floor will operate in the same way as the tobacco auction floors where bidders compete for the product.

“If things work the way we have planned and if our lieutenants execute the tasks we have given them, we are going to open cotton auction floors for the first time in the country,” he said.

The goal, said VP Chiwenga, was to promote value addition.

Areas such as Sanyati, Gokwe, Middle Sabi, Chiredzi and parts of Mashonaland Central province are some of the cotton production hubs, but interest in the crop had declined over the years owing to poor prices.

Turning to the maize buying price of $390, VP Chiwenga said the price was aimed at cushioning the farmer after a hostile environment soon after the country embarked on land redistribution.

“The war to reclaim the land cannot be survived by any other country,” he said. “Some people take it lightly, but if it was not for the fact that God loves this country, there would have been bloodshed. Bones would have been everywhere. People would have died.”

With the land firmly in the hands of Zimbabweans, VP Chiwenga said the next frontier was mechanisation to improve production.

This is expected to reduce production costs which will lead to the prices coming down.

“We are looking at getting our machinery at a cheap price and inputs,” he said. “This is why the President is going around the world so that we remove antiquated machinery in our factories. These have been the reason why some of them closed down.”

VP Chiwenga said modernisation of machinery would lead to prices going down.

Some of the machinery, he said, was installed during World War II and was no longer in production, pushing the price of products up.