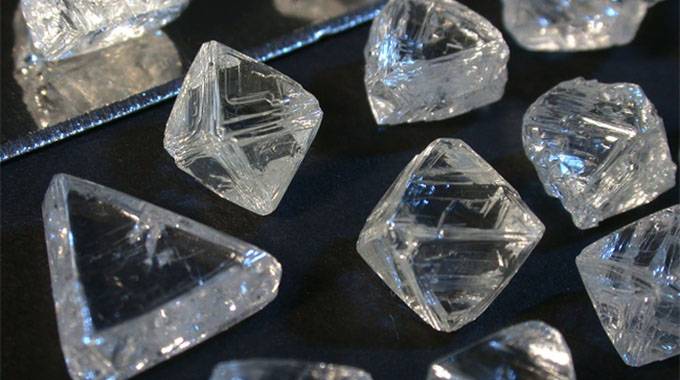 What has happened to Zimbabwe’s diamonds?

A few years ago, following the discovery of the precious mineral which triggered a massive fortune hunt in Marange and Chiadzwa, Zimbabwe looked on course for a massive boon.

After the mad rush between 2006 and 2008, Government regularised operations, staked up security and won a major international battle against detractors that fought tooth and nail to have Zimbabwe’s gems barred from the market.

Diamonds are marketed under the aegis of a platform called the Kimberly Process and Certification Scheme (KPCS).

The defamation of Zimbabwe’s diamonds as “blood diamonds”, a narrative pushed by some Western countries such as Canada and the United States at KPCS, did not quite stick.

Zimbabwe’s diamonds were in demand — from Antwerp to Surat — and the country had done well to secure the legitimate exploitation of the resource: its systems were even better than in most African mining countries.

The rest of the world was upbeat about the prospect of the Zimbabwe’s find, estimated generously at some point that it held a quarter of all rough diamonds in the world, making the country the fourth largest producer.

Some of these figures were never tested, that Zimbabwe has had little capacity to quantify and estimate its mineralisation not least. But it all spoke to a purple patch that Zimbabwe had hit.

From sometime in 2008 until 2013, diamonds were the cash cow for a country that had previously depended on agriculture and other minerals.

Companies such as Mbada Diamonds, Marange Resources, Anjin, Diamond Mining Company (DMC), among others that had been given licence to exploit the resource, shot to prominence.

In particular, Mbada posed as a cash-slush entity that not only topped revenues declared to Government, but also had a massive corporate social responsibility that spanned sponsoring soccer and national football teams to providing clean water to residents in cholera-stricken parts of Harare.

In no small part — and this is anecdotal — at the height of the operations in Marange, cash flowed in Zimbabwe, something that is not too hard to explain given the profitability of the trade.

Then came the decline.

A combination of poor corporate governance, unaccountability and lack of investment saw the diamond industry lose its lustre around 2014 and ’15.

Perhaps that is an understatement.

The diamond industry just collapsed, something made worse by the realisation that alluvial deposits had been exhausted and that companies had not invested in machinery to excavate deeper into kimberlite deposits.

Ignominiously, some companies are said to have demanded more land to scoop up alluvial diamonds rather than dig deeper.

Former President Mugabe captured the lowest ebb of the diamond story when, in an interview in 2016, he claimed that the country had been deprived of $15 billion of diamond revenue.

That figure has been controversial ever since. Questions have been asked where Mugabe got that figure, and whether it was commensurate with Zimbabwe’s capacity.

Other concerns have revolved around the opacity of the trade — itself a field of sleaze, money and influence.

But Mugabe himself failed to show up in a parliamentary hearing meant to establish the missing $15 billion.

Yet, the figure remains a metaphor of lost opportunity.

In March 2016, Government came up with a measure that was supposed to restore the shine to diamonds by creating the Zimbabwe Consolidated Diamond Company (ZCDC), merging the operations of Mbada Diamonds, Anjin Investments, Marange Resources, Diamond Mining Company, Jinan, RERA, Kusena and Gye-Nyame.

The companies’ licences had expired and Government did not renew them, instead opting to lead the mining itself through the ZCDC.

However, this has not brought the much-needed lustre back.

In fact, ZCDC should be seeing its last days following the announcement that a new diamond policy, which will lead to the unbundling of the ZCDC to ensure more players are involved in the sector.

It is a plan that has the backing of President Mnangagwa, who clarified that under the old administration the existing players were barred, but Government had since realised that one company had no capacity to deal with the exploitation of this mineral.

A new diamond policy is being crafted with a view to ensuring viability and sustainability in the sector.

We are talking here about a sector that is able to lift the economy, almost single-handedly.

The recent slump in the economy — feared to be some spectre of 2008 — makes the situation ever more urgent.

The country requires money and players in the sector — with enough lessons from the past — should be able to do the right thing. This is not to mention that the country itself is sitting on a reported half a million carats stockpile of diamonds whose sale has been stalled by political-legal issues. We need the diamonds now.

It is imperative that authorities find a lasting solution to make the country glow.

An equally important sector is agriculture. It is generally asserted that the land reform programme — that heroic and historic programme that resettled millions of Zimbabweans previously condemned to arid areas by a skewed colonial land tenure system — is a closed chapter.

However, there are glaring issues that still need to be addressed.

Issues of rationalising ownership in line with one-man,one-farm policy; issues of productivity relative to size; issues of security of tenure and so on.

Besides, there are ongoing disputes in the provinces as people fight over double allocations, borders and other issues.

A recent tour by The Herald in Mashonaland West confirmed this state of affairs. For all the good that is happening in the countryside, there are some niggling issues.

A land audit was supposed to be the panacea to the problem.

In 2016, Government rolled out the Comprehensive National Agricultural Land Audit Programme whose aims included the re-mapping of farm boundaries, valuation of improvements on the farms, in the case of Bilateral Investment Promotion and Protection Agreement (Bippa) farms that were gazetted, valuation of land and improvements, modalities for compensation of farmers and the granting of property rights to beneficiaries of the land reform.

The commission is charged with ensuring accountability, fairness and transparency in the administration of agricultural land vested in the State.

It has been noted that there are several disputes arising on the farms, including land ownership, double allocations, sharing of farm infrastructure, illegal settlers, boundary disputes, ownership of land and upon divorce and inheritance, settlement by persons on grazing land, conflict of shrines and cultural areas, and disputes between the former farm owner and newly-resettled farmers.

Visit any agricultural district today, the jury is still out on that.

District and provincial officials have done the best they can, but are being stalled because central government has not given policy directions as per findings and recommendations they have made.

Meanwhile, the land is not fully utilised.

We may as well discount the 2018-2019 season and all the benefits that would have come from reordering the sector.

Until next year, perhaps.