Govt must free up fuel imports 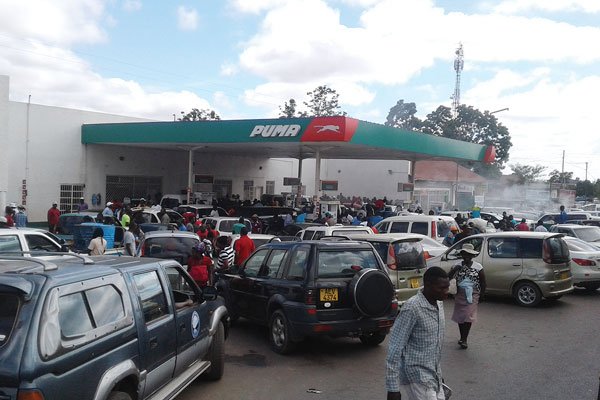 Sardonic Zimbabweans have a joke for every crisis.

One of the many crisis-fueled wisecracks goes: What’s the best time to fill up your fuel tank?

Answer: “When a government official tells you not to panic.”

Last week, Cabinet, which is struggling to resolve fuel shortages that intensified in October last year, announced that major corporations would now be allowed to import their own petrol and diesel.

This is the latest in a growing list of government’s failed attempts to end the crisis.

In October, Energy minister Joram Gumbo, whose communication during the fuel crisis has not done his already suspect credibility any good, announced that government was finalising a deal with Sakunda, which would see the commodity firm supplying Zimbabwe with 1,6 billion litres of fuel.

The country consumed 1,63 billion litres of petrol and diesel in 2018, according to the Zimbabwe Revenue Authority data.

At the time of Gumbo’s announcement, there was a brief reprieve as some 100 million litres of the product, sourced through Sakunda, temporarily eased the shortages.

In the midst of it all, Zimbabweans got treated to a bizarre side-show in which four senior central bank officials were suspended, incredibly on the strength of unsubstantiated allegations of exaccarbating the fuel crisis by a Facebooker. The officials were eventually cleared and reinstated.

Away from the side-shows, the situation got worse, and it was the Reserve Bank of Zimbabwe (RBZ) governor John Mangudya’s turn to attempt to calm down the market.

Appearing before a Parliamentary portfolio committee on December 20, 2018, Mangudya, who revealed he had a habit of counting cars in fuel queues, declared the lines would be gone “by Christmas”.

This wasn’t to be. The lines got longer in January, traditionally a period of a lull in demand.

The move precipitated bloody protests in which a reported 17 people died, according to rights groups, and millions of dollars worth of property destroyed.

For a while, the new high prices, which tracked the black market exchange rate, appeared to douse demand.

Queues disappeared, but only for a couple of weeks. By early February, long lines were, once again, a common feature across the country.

With money supply slowing down and the black market exchange rate holding steady, it quickly became clear that supply, not demand side dynamics, was at play.

Put simply, the RBZ does not have the foreign currency to maintain adequate fuel supplies.

The centralised forex allocation regime maintained by the RBZ since mid-2016 has struggled to cope with demand, while major sources of dollar liquidity, such a gold producers, have cut back on production due to uneconomic forex retention rules imposed by the central bank.

The goose laying the golden egg is hardly thriving.

Given this grim reality, it is surprising that the central bank still insists on a role in fuel procurement, even after freeing up forex allocation in the economy through the re-introduction of an inter-bank forex market on February 20.

Apart from fuel, the central bank also wants to continue allocating forex for the importation of cooking oil, medicines and electricity.

Not only are the optics of fuel queues bad for a government which insists it’s succeeding in fixing the ailing economy, the long lines, in which precious productive time is lost at a huge cost to the economy, also accentuate a crisis mentality which undermines confidence.

Government’s inability to deal decisively with an issue of such importance does not inspire the confidence that it has what it takes to not only stop the bleeding, but to set the economy on a path of sustained growth.

Mnangagwa and his government need to go beyond Tuesday’s half-hearted liberalisation of fuel procurement.

They must leave oil marketing companies to import the product and sell it at prices which allow them to thrive.

This is by no means a revolutionary idea.

All of Zimbabwe’s neighbours, some which have far less export earnings than us, are well served by letting the market be.

Filling up fuel tanks and putting cooking oil on citizens’ tables is not the central bank’s business.

It is way past time for the government to leave the fuel business to private players. After all, the sector has firms connected to major international oil industry operators such as Total, Engen, Glencore and Kuwait’s Independent Petroleum Group. — newZWire