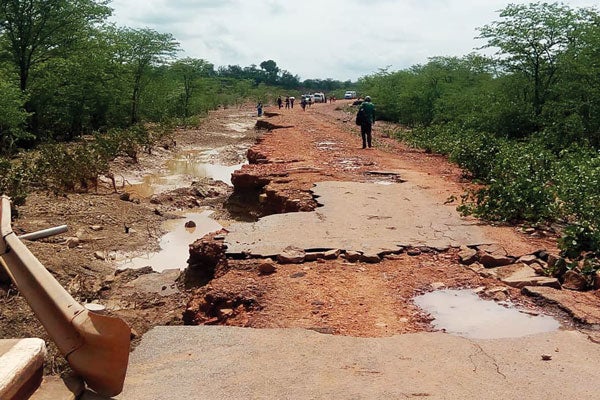 Parts of Binga were last week hit by flash floods, which killed one person and displaced over 30 families, with the Department of Civil Protection only coming to their rescue days later.

“I am aware that they went to the ground and that they took bags of maize to Binga. Yes, we do appreciate that, but they just brought maize which needs to be processed into mealie-meal and it is going to be time consuming. Our government is too slow.”
He said it took them almost a week to come to the aid of marooned families.

“It took government four days to respond to the affected people. Floods happened on Friday and Saturday, if I’m not mistaken, and they only responded on Thursday the following week after the floods occurred, which is not fair at all because we expected them to be the first to take action,” Sibanda said. He said the government could not even come up with a temporary shelter for the displaced families.

“Camps should have been established by now, but families had to stay with friends and some had to seek help from their relatives, which is not fair at all. We all know that the economy is unstable, but how are they supposed to survive when nowadays it’s very hard to just put food on the table for your own family?” the Binga North legislator moaned.

“How is that possible if you now have plates added on top of those that you were already failing to cater for? No blankets, no temporary homes have been put up for victims. They are not responding swiftly.”

Matabeleland North provincial vice-chairman for Binga Disaster Fund, Jabulani Hadebe, said they were frustrated by the way the government responded to their call for assistance.

“We feel very bad about it because they are not taking this seriously. When it’s a matter of urgency, they just take their time,” Hadebe said.