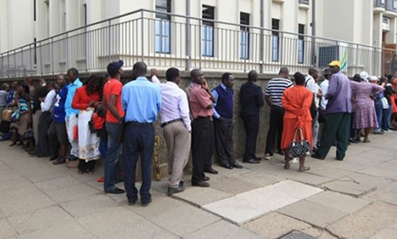 HARARE – Government has been urged to own up to its overspending and stop
punishing ordinary citizens by burdening them with the extra two percent
per dollar tax.

Responding to President Emmerson Mnangagwa’s recent utterances that
Zimbabweans should take the pain, analysts said it was not fair for the
government to hurt the ordinary citizens.

Curiously, despite the outrage over taxations and the worsening economy,
the president this week defended his administration’s policies saying the
liberalisation of the economy has its own pains and Zimbabweans have no
choice but to endure the phase.

Mnangagwa was responding to questions at a Professional Women, Women
Executives and Business Women Forum (Proweb)-organised breakfast meeting
in the capital.

Political analyst Eldred Masunungure yesterday told the Daily News that
although it is understandable that sacrifices should be made in redressing
the economy, it is unfair to make the already burdened citizens pay for
the leadership’s erring.

“It is understandable that after two decades of economic slide, sacrifices
should be made; even though those that are responsible are the ones that
are calling for the sacrifices. But it should be the leadership not the
grassroots that should start the sacrificing,” he said.

“There should be evidence that government, the regime leaders are making
serious and constant efforts to sacrifice on the altar of the economy and
the masses will follow suit.

“In this instance the elite have maintained their lifestyle while the
masses are suffering. The best lesson is through practice and the
government elite should lead by example,” he said.

Analyst Ibbo Mandaza said the introduced reforms show that the government
has run out of ideas in the context of a ballooning expenditure bill.

He said by November last year the domestic debt was $2,6 billion and now
it has ballooned to $9,6 billion, noting that an audit needs to be carried
out to account for the $7 billion spending.

“It only shows that government has run out of ideas and people must demand
the $7 billion. Where did all that money go in just a few months?

“Clearly, government overspending is responsible for the crisis. So why
should everyone suffer?” he said.

“There was a policy dialogue last week which the Finance minister (Mthuli
Ncube) was supposed to attend but he didn’t. The demand for the $7 billion
was the resolution at that meeting. People want to know where the money
went; they want an audit.”

Eddie Cross, an economist was, however, supportive of government’s
economic reforms hinting the current administration inherited a sickly
economy from the previous government.

He said the two percent tax should not be a cause of alarm among the
ordinary citizens who do not transact in large amounts.

“He (Mthuli) is right; we inherited a messy economy from the previous
regime. He had to address the economic crisis and two percent tax is one
of the measures to do so,” he said.

“In the meantime Zimbabweans have to take the pain as we fix the economy.
The two percent tax impinges on the wealthy more than the poor.

When he presented the Transitional Stabilisation Programme (TSP) last
week, the Finance minister said Zimbabweans should brace themselves for
trying times as the government addresses the economy.

Mnangagwa on Monday further emphasised that for a viable and solid
economy, his administration is going to take measures that are going to be
painful.

For the past days after the central bank and the Finance ministry
implemented new economic reforms, the country continues to experience sky
rocketing forex exchange rates, commodity shortages, consequent price
hikes, looming retrenchments and company closures as part of the pain
package.