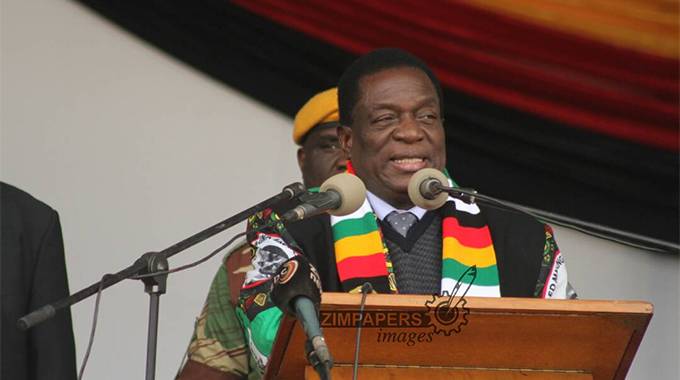 Farirai Machivenyika Senior Reporter
Government yesterday signed a special coal mining grant with iron and steel company Steelmakers that will allow the firm to invest $120 million on expanding its production.

With iron and steel plants in Kwekwe and Masvingo, the company has been operating in the country since 1997.

The special grant was signed between Mines and Mining Development Minister Winston Chitando and Steelmakers chief executive Mr Kalpesh Patel in the presence of President Mnangagwa at Government’s Munhumutapa offices.

The company’s operations have been hampered by the closure of Ziscosteel as it relied on it for raw materials, resulting in the Masvingo plant being put under care and maintenance in 2010.

The awarding of the grant will see the firm’s workforce increasing from 900 to 2 000 as production expands.

Speaking at the occasion, President Mnangagwa said the company had been awarded the grant as a reward for continuing with its operations when many other companies had closed shop.

“Steelmakers has weathered the storm, many companies closed down and left,” he said. “Steelmakers, despite the economic challenges which they faced and went through, remained in the country and because of that perseverance we are rewarding them by allowing them to expand and give them a special grant.

“The Steelmakers in Kwekwe will now expand and possibly grow the number of employees they used to have in the past and the quality of products is going to improve.

“The plant in Masvingo, Simbi, is going to double in terms of production and this again will bring new technology, as well as skills and engineering in Masvingo and above that about 80 percent of the products of Steelmakers will be for export, earning the country the much needed foreign currency.”

President Mnangagwa said Government was committed to partnering the private sector in growing the economy.

In his remarks, Mr Patel said the awarding of the grant was critical in the resumption of operations at the Masvingo plant.

“This, of course, is indeed a very important step for us,” he said. “It gives us the impetus to restart our iron plant in Masvingo, Simbi. This was critical in order to create value addition of iron ore into iron and iron into steel in Zimbabwe

“What will happen is that we will create 180 percent value addition in the country. This is most critical, it provides (for) end to end (production) from ore to steel.

“We have been here for many years, but we want to go to the next step to increase capacity utilisation at the existing plant, but most importantly to initiate our next investment step, which is increasing from 40 000 tonnes of iron to 300 000 tonnes of finished steel.

“The new phase is expected to cost $120 million in its first phase and will involve additional sponge iron manufacturing and another steel plant, which will produce structural and reinforcement steel.”

Mr Patel welcomed the business environment that has been created by the coming in of the new dispensation.

“This is extremely important Your Excellency, your new dispensation says the economy is a priority,” he said. “For us in industry and business this is extremely encouraging, it gives us the confidence to grow, which we will and on our part I can assure you that we are committed to producing quality steel, not only for the local market, but for export.”

Steelmakers produce iron and steel products that are mainly used in mining, agriculture, manufacturing and its expansion will benefit downstream industries.