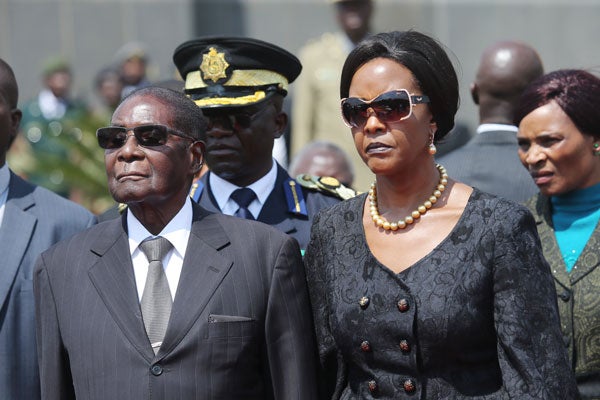 ANY mention of the late president Robert Mugabe still invokes a deep sense of resentment from many a villager in Maphisa, Matabeleland South, who are haunted by the army massacres, infamously known as Gukurahundi.

Maphisa centre is 7km from Bhalagwe, a notorious detention centre where the Fifth Brigade killed hundreds of people and buried them in shallow mass graves during the 1980s Gukurahundi era.

To date, there are scattered bricks of destroyed detention cells and other infrastructure used by the Fifth Brigade at the detention centre.

It is said some villagers have roofed their homesteads with asbestos sheets from the destroyed detention cells.

Mugabe, who is accused of presiding over the mass killings of over an estimated 20 000 civilians from Matabeleland and Midlands provinces, never apologised for the massacres he
described as a “moment of madness”.

Maphisa bore the brunt of the massacres and villagers are torn apart between celebrating his death or mourning his passing-on, with many telling Sunday Southern Eye that what pains
them the most is that “Mugabe never faced justice.”

Ndodana Moyo, aged 37, lost a brother in 1984 during Gukurahundi.

Mugabe ruled for 37 years until he was toppled by the military in November 2017.

“We are told that the Fifth Brigade militia took the eldest brother from our family at Kezi business centre asking him to show them some route to where they wanted to go, and that is
the last time he was seen alive.

“Those who survived the torture at Bhalagwe say he was tortured, killed and his body thrown into the disused mine in Bhalagwe,” Moyo said.

“This all happened under Mugabe’s watch. And now that he is dead, do I celebrate or do I join fellow countrymen in mourning?

“No, I can’t! I am pained, and mourning that he passed away before facing any justice, before this issue was solved.”

As Mugabe lies motionless after he passed away aged 95 on September 6 at a Singapore hospital, the Gukurahundi shadow has followed him as many in Maphisa echo Moyo’s anger and pain over
the mass killings.

Jeconiah Moyo, another Gukurahundi victim from Zamanyoni area, ward 19 in Bhalagwe village, said memories of suffering, the torture, the beatings and seeing fellow villagers being
killed by the Fifth Brigade are still fresh in his mind.

“Certainly, his death cannot erase the bitter memories, the nightmare that we went through,” he said.
“Celebrating his death will never erase the horrors that he put us through. Myself, I was picked up at night on March 8, 1984 and detained weeks on end at the Bhalagwe detention centre.

“His death torments us in that he is lying in peace leaving us not in peace, leaving us without closure and mourning over the suffering, the torture and the killings of our people
during that dark chapter.”

While some Zimbabweans described Mugabe as a hero, pan-Africanist and revolutionary, Gukurahundi victims, activists and other commenters said his role in the massacre of thousands of
innocent civilians dwarfed whatever contributions he made.

Ibhetshu Likazulu secretary-general Mbuso Fuzwayo said Mugabe would be remembered for all the bad things he did after independence.

“It is unfortunate that he presided over devilish things, for example, the Matabeleland genocide, ethnic divisions, destroying the economy and the future,” he said.

“He will be remembered for the culture of killing those with a different view to his politically.

“And his worst was to die leaving behind a divided nation through his ethnic hatred for Ndebele speakers, he was just bad news.

“He died without saying sorry to victims of the genocide, without telling us why he killed them.”

“Nobody will remember him in good spirits,” he said. “As for the Zipra, he does not have a place in our books, he was the worst leader Africa has ever had.”

Prominent Bulawayo-based religious leader Reverend Sikhalo Cele described Mugabe “as a devil” to Gukurahundi victims and a saint to those who benefited from his largesse.

“What I mean is, to others Mugabe is a pan-Africanist who stood for the rights and justice of Africans. However, the same angel became a devil back home,” he said.

“In reality there can’t be any positive from Mugabe.”

In June, chiefs from Matabeleland and Midlands met Mnangagwa at State House in Bulawayo where they demanded an apology for the Gukurahundi massacres.

In March, Mnangagwa met the clergy and civic society groups where the issue of an apology was also topical.

He has in return promised to address concerns of the Gukurahundi victims by among others facilitating exhumations and reburials.

But to a Gukurahundi victim like Moyo, this was a little too late with Mugabe having passed away.

“Mugabe is better because is sleeping in a casket; was flown to Zimbabwe from Singapore whereas my brother and our relatives are buried in shallow graves, and unaccounted for,” he said
in his parting short.

“We also wish we could also mourn our own the same way they are mourning Mugabe and find closure which Mugabe denied us in his lifetime.”

Human rights groups say at least 20 000 people, mainly Zapu supporters, were massacred in Matabeleland and Midlands between 1983 and 1987.