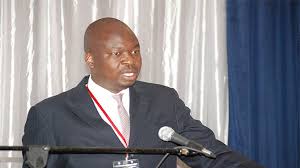 Guvamatanga was hospitalised for over three weeks after going down with the respiratory illness, which also spread to his wife, young children and household staff.

In an interview with the ZBC on Sunday, Guvamatanga admitted he nearly died.

Doctors have now given Guvamatanga and his family the all clear – and the treasury secretary gave his family cheer by flying them to Victoria Falls.

Videos posted on Facebook by his family show Guvamatanga and his family being driven into the Robert Gabriel Mugabe International Airport on Saturday where a Beech 300 Super King Air 350 aircraft was on standby to fly the family to the tourist resort which re-opened last week after months of coronavirus-imposed restrictions.

The aircraft is registered to National Airways Corporation of South Africa.

Guvamatanga did not travel, however, although he momentarily went into the aircraft to ensure his family was comfortable.

Guvamatanga – the government’s paymaster – has been in the eye of a storm after approving dubious payments running into millions of dollars to Drax International, a company linked to President Emmerson Mnangagwa’s twin sons Collins and Shaun. The company was awarded tenders worth over US$60 million to supply drugs and medical devices to the health ministry without going to tender.

Obadiah Moyo was arrested and sacked as health minister over the scandal exposed by online tabloid ZimLive. Four executives of the state-owned drugs firm NatPharm were also arrested, but no action was taken against Guvamatanga who maintains that the task of doing due diligence on suppliers fell on the health ministry. ZimLive editor Mduduzi Mathuthu is now on the run from security forces who accuse him of inciting violence.

Guvamatanga earlier this year reportedly paid US$50,000 cash for a kitchen suite – although like all Zimbabwean public servants he is paid in the worthless local currency.

Doctors and nurses are on strike at public hospitals where most Zimbabweans end up if they develop complications from the coronavirus – but Guvamatanga had no such problems after being treated at the Rock Foundation Medical Centre in Mt Pleasant which was recently acquired by the controversial petroleum tycoon Kudakwashe Tagwirei.

The facility, formerly owned by jailed child rapist Munyaradzi Kereke, was renovated to the tune of US$3 million and is reserved for the ruling political and military elites.