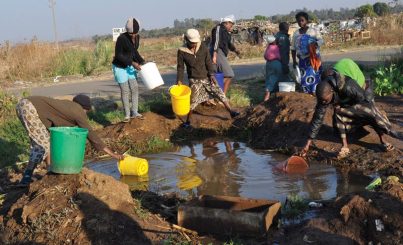 HARARE – The continued water cuts in Harare are sparking fears of another
outbreak of waterborne diseases, which could worsen the situation in the
health delivery sector.

Over the weekend, there was no water in Dzivaresekwa, Mbare, Avondale
West, Highfield, Hatfield and Tynwald North.

This list adds to known suburbs that have had perennial water challenges,
among them Mabvuku-Tafara, Hatcliffe, Highlands, Msasa Park, Borrowdale,
Hopley, Southerly Park and Caledonia.

“There should be contingency plans to avoid this as the city will continue
to experience typhoid and cholera yearly,” Rwambiwa said.

Rwambiwa said the city fathers were failing to fulfil their statutory
obligation as enshrined in Sections 44 of the Constitution.

Section 44 spells out that the State and every person, including juristic
persons, and every institution and agency of the government at every level
must respect, protect, promote and fulfil the rights and freedoms set out
in the chapter.

These include the right to food and water.

She said some of the problems militating against the provision of water
such as power supply outages at MJ, could be rectified if HCC implements
its biogas project at Firle Sewer Treatment Works.

“Expert, Rafik Karaman, says 32 kilogrammes (kgs) of waste can produce
2,91 kilowatts (kWh). The $19,5 million grant from the African Development
Bank was expected to cover the construction of a biogas power plant at
Firle and its completion date was December 2015,” she said.

“Besides electricity generation, the biogas plant was supposed to reduce
water treatment costs by an estimated 50 percent. Firle is consuming
approximately $300 000 electricity costs every month yet it holds the key
to reducing council’s electricity bill,” she said.