Fungai Lupande
Mashonaland Central Bureau
Events of January 31, 2021 will forever be embedded in the memories of the Iron Duke community as they witnessed the last moments of two youthful friends, Evidence Chipadze (24) and Godknows Mudavanhu (21) who were having “Kodak moments” on a bridge oblivious of the danger that was lurking.

The pair was swept away moments later after the collapse of Iron Duke’s Kent 1 and Kent 2 dams, which caused flooding downstream.

Like any youths their age, the pair could not pass up an opportunity to see the spectacular view of water flowing over Iron Duke bridge.

They decided to freeze the moment on camera for posterity. The Herald spoke to Mudavanhu’s father Mr Davis Chaitezvi who told a heart breaking story of his son’s last moments when the dam walls collapsed causing flooding that swept away the pair and three others.

The body of Chipadze and Cecilia Philip, who was in her late 30s, were retrieved and the police sub-aqua unit and the community are still searching for Mudavanhu and two others who are still missing.

“My son was employed at a nearby farm. On the fateful day, when Yellow Jacket River burst its banks, he followed his peers to watch the water,” he said.

“It was in the morning and water was flowing over the bridge. My son and his friend Evidence were on the bridge taking pictures when disaster struck. They even remarked that this was a strange event that could see some people failing to return home.

“The dam wall collapsed and people started shouting for them to move but it was too late.

“They did not get the chance to escape to safety and were swept away.”

He said the community immediately rallied and began to search for the boys.

“Even though we haven’t found our son, we are grateful for the support we are receiving from the community.”

Tonderai Gumbo, who resides at Iron Duke compound, said he went to the scene after hearing a strange sound coming from the direction of the dams.

“The river was full and many people were coming to see the water overflowing. I started walking towards the school and there were two boys following behind who were taking pictures. We were on higher ground and I had no idea that the dam wall had cracked,” he said.

“When the dam wall collapsed I was swept away luckily I fell close to the river bank. I held on to a guide rope that was tied around the pipes that supply water to the compound. I was struck by a boulder on the shoulder and my collar bone was injured. I realised that I could be swept away and I decide to let go of the rope and crawl out of the water.

“I was using one hand because the other one was badly injured. The first thing I did was to look for people that were with me before the incident but I could not find them.

He added: “As I was trying to make sense of what had just happened I saw another man trying to crawl out of the water at a mountain nearby. Unfortunately he was swept back into the river again maybe  this happened because he was tired. 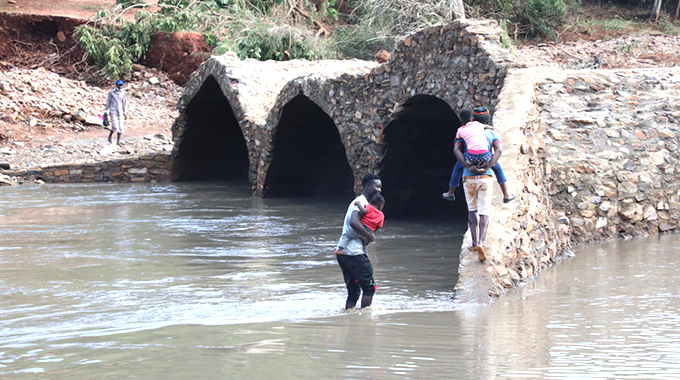 “I moved to a safe place and informed people that I could not locate the people that were with me but no one listened. People were mesmerised by the water and trees being uprooted. No one took me seriously thinking I was still under shock.”

Ward18 Councillor Canaan Moyo said this was not the first time the dam wall had collapsed.

“The first incident happened in 1995. In this latest incidence I received information at around 7:30 am that the river was full and nearby farms were flooded,” he said.

“I was in Glendale when I received the message that the bridge was impassable and water was flowing over it. When I arrived I realised that the situation was similar to that of 1995.

“Some complied and after 45 minutes the dam wall collapsed causing flooding downstream.”

The reconstruction of Iron Duke Bridge is almost complete after the Zimbabwe National Army partnered Mazowe Rural District Council to assist the communities, which were cut off after the collapse of the dams.

Lands, Agriculture, Water, Fisheries and Rural Resettlement Minister Dr Anxious Masuka visited the site and said the collapse was a result of a fault in the design. The dams were also being continuously renovated to store more water.