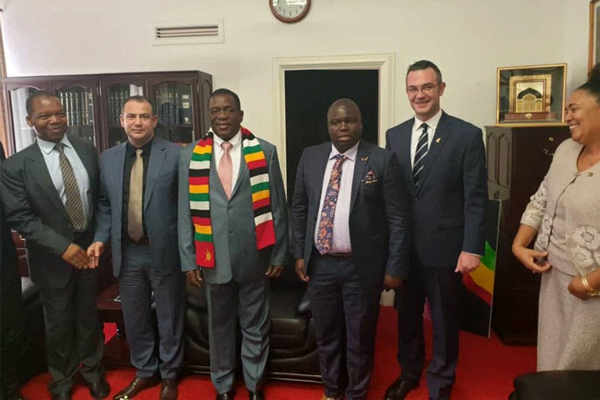 HEADS are rolling at the Zimbabwe Broadcasting Corporation (ZBC) over a video of President Emmerson Mnangagwa which appeared on the 8pm news bulletin sometime in April, where he told the nation that the controversial Drax International had donated US$60 million worth of medical stuff for the fight against COVID-19.

Cameraman Stan Marodza, who took the video clip and was accused by Information ministry permanent secretary Ndavaningi Mangwana of sneaking it onto the main news bulletin, has been suspended. Mangwana also accused Marodza of selling the video to Delish Nguwaya, the man at the centre of the US$60 million procurement scandal that has sucked in Mnangagwa’s family.

Nguwaya is currently battling to secure bail after he was arrested early this month over the scandal. Health minister Obadiah Moyo was last week arrested over the same case, but is out after being granted $50 000 bail.

In a letter dated June 19, the director of news and current affairs Gilbert Nyambabvu, instructed the ZBC human resources and administration director to charge Marodza with gross misconduct which could lead to dismissal.

“Following preliminary investigations, I am of the opinion that cameraman S Marodza committed gross misconduct in violation of section 11:25 of the ZBC employment code of conduct,” reads the letter in part.

The video allegedly embarrassed Mnangagwa and his family after they claimed that they had no links to Drax International or its representative Nguwaya, yet the clip shows the president standing next to Nguwaya and announcing a donation of US$60 million which he said came after he personally appealed to the company.

Nyambabvu, instead accuses Marodza of using the video clip, which has poor sound quality despite his bosses instructing otherwise.

“Upon returning to Pockets Hill, the reporter Abigail Tembo debriefed the news editor who consulted with the director of news and current affairs and it was decided that the US$60 million donation must be excluded from the reporter’s story due to poor audio,” Nyambabvu alleged.

Three days later, Marodza is alleged to have smuggled the story into the 8pm news as the top story, although paper trail shows that the story was cleared by a Wadzanai Mombera and Effort Magoso — the news bulletin manager before being aired.

Before Marodza’s suspension without pay, Mangwana had used his social media account to allege the cameraman had sold the footage to Nguwaya.

Contrary to Nyambabvu’s allegations that the audio was of poor sound quality, Mangwana said the clip was banned after it turned out the president had been misled into believing that a donation of US$60 million had been made to government.

The First Family has vainly tried to dissociate itself with Nguwaya despite appearing in several pictures with them.