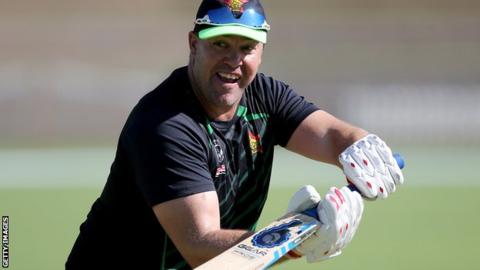 Scotland have drafted in former Zimbabwe captain Heath Streak as a consultant for the remainder of their Twenty20 tri-series in the Netherlands.

Scotland lost their opener against Ireland before a dramatic tie in Sunday’s second match with the Irish.

“They have really improved since the 2015 Cricket World Cup,” Streak said.

“They have now got a consistently competitive team and their historic first ODI win over England is testament to their progress as a country in world cricket.”

After leading his country as a player, and also captaining Warwickshire for a season during his three years at Edgbaston, Streak has moved successfully into coaching. He had spells as both a bowling coach and head coach with Zimbabwe.

He has also worked with the bowlers at Kolkata Knight Riders in the Indian Premier League and with Bangladesh.

After beating England for the first time, Scotland are without a win in four matches following two T20 losses to Pakistan in Edinburgh, followed by a defeat and a tie with Ireland.

They have two further matches in the tri-series tournament, both against hosts Netherlands, on Tuesday, 19 June and Wednesday, 20 June.