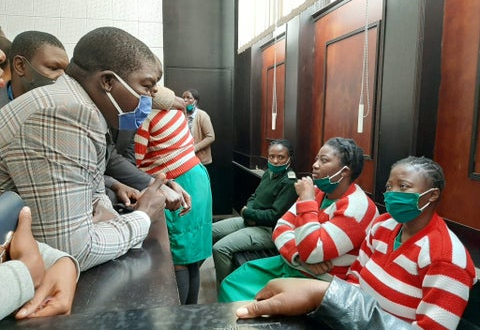 HIGH Court judge Justice Esther Muremba yesterday ordered the release of MDC Alliance legislator Joanah Mamombe from Chikurubi Remand Prison saying there was no justification for placing her in custody as government medical doctors could mentally examine her while
outside.

Justice Muremba said magistrate Bianca Makwande misdirected herself when she ordered Mamombe to be locked up as she had not breached any of her bail conditions.

Mamombe’s lawyers Alec Muchadehama, Tinomuda Shoko, Jeremiah Bhamu and Roseline Hanzi recently approached the High Court on appeal after the opposition legislator was ordered to stay in custody awaiting mental examination by State doctors to ascertain if she was fit to stand tria

The legislator is, according to her private doctor, mentally unstable to stand trial on charges of faking abduction together with two other female party activists, Cecilia Chimbiri and Netsai Marova.

She was committed to remand prison after she missed trial, with her doctor indicating she was admitted in hospital over a mental disorder following her alleged abduction by State security agents.

“… the applicant (Joanah Mamombe) was already out of custody on bail which she had been granted by this court.

“Nothing shows that she had breached her bail conditions. It is not disputed that when a warrant of arrest was issued against her for failing to appear in court on September 15, 2020, she was in hospital.”

Justice Muremba ruled: “Nothing, therefore, warranted her placement in custody for the purposes of her mental examination.”

She said Mamombe could still have been ordered to undergo mental examination at a State medical facility.

Mamombe is expected to appear in court today.