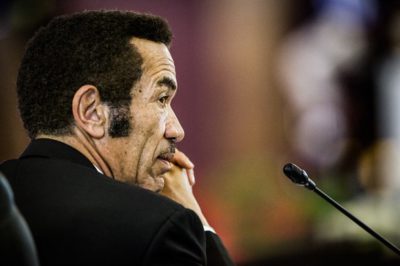 The text of Khama’s letter:

Mr President, I am writing to appeal to you to be sensitive to the

voluntarily relinquishing power as the President of Zimbabwe.My appeal

is necessitated by an unprecedented situation currently unfolding in

Zimbabwe whereby your own party, ZANU-PF, is calling for your

immediate resignation and is in the process of instituting

impeachment.The people of Zimbabwe have for a long time been subjected

to untold suffering as a result of poor governance under your leadership.

It is, therefore, my conviction that by vacating the Presidency, this

the much needed socio-economic recovery in Zimbabwe.

I, therefore, reiterate my appeal to you to honourably step aside, if

you really care for them, as you profess, and if you cannot find it in

you to do so, then as a Christian do so in the spirit of our Lord in

order to usher in a new period going forward of unity, peace and

prosperity for Zimbabweans and allow your country to be the economic