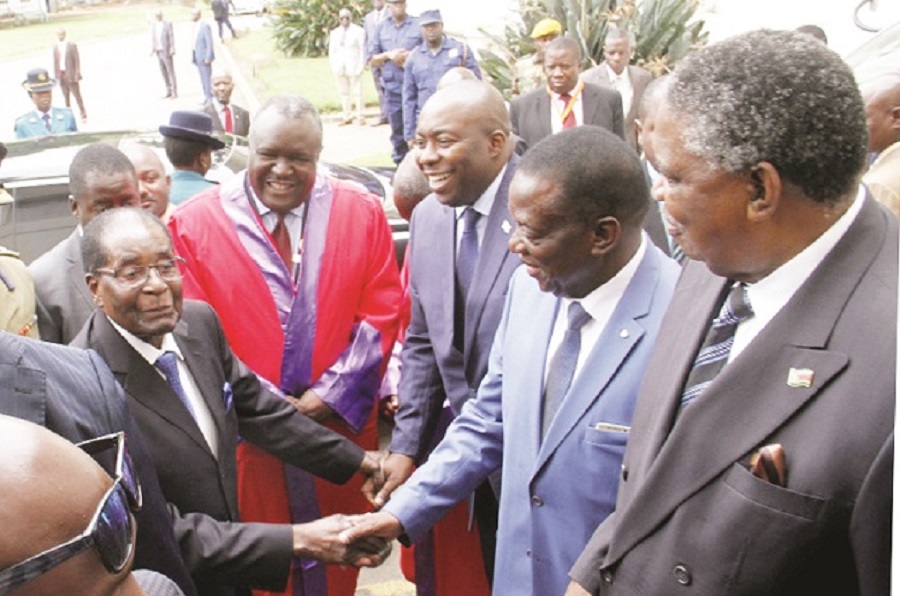 PRESIDENT Robert Mugabe this week fired his deputy Emmerson Mnangagwa following a systematic attack on the vice-president by First Lady Grace Mugabe and her G40 allies, who are accusing him of fanning factionalism in the ruling Zanu PF. 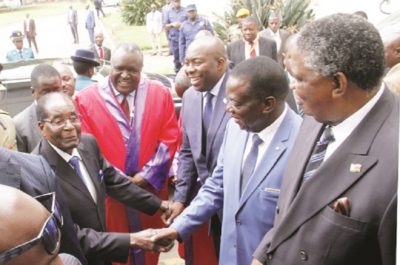 Mnangagwa was appointed Mugabe’s deputy in 2014 following the ouster of former vice-president Joice Mujuru who was also accused of similar charges of plotting to overthrow Mugabe.

The rift between Mnangagwa and the G40 faction that has coalesced around Grace Mugabe began days after he was appointed as Mugabe’s deputy.

Sources said the two factions which fought from the same corner as they ousted Mujuru began to quarrel after G40 kingpins approached Mnangagwa to form some sort of “power sharing deal” in the post-Mujuru era.

“The G40 kingpins wanted an arrangement of some power-sharing deal where they were to work together with Mnangagwa,” a source said. “Mnangagwa is said to have rejected their overtures and opted to continue working with his colleagues, a group of older party members who fought in the liberation struggle.”

The source added: “From there onwards swords were drawn against the vice-president.”

The G40 proponent also said Mnangagwa did not invite any of them — not even Grace — to his celebration party in his rural home in January 2015.

“They did not invite anyone to their party and some of the G40 loyalists were even barred from attending,” the source said. “They had a guest list which did not include other people like Ambassador Isaac Moyo who was turned away at the gate.”

The G40 faction vowed to derail Mnangagwa’s ascendency and, with the help of Grace Mugabe, they stepped up efforts to oust Mugabe’s deputy before next month’s congress.

Sources also said the G40 faction was incensed by Mnangagwa’s interview with a United Kingdom-based news magazine, New Statesman. G40 kingpins say that Mnangagwa accepted the interview despite the fact that it was arranged “through unofficial back channels” as stated by the journalist in the story.

According to the story, “it was not in his interest (Mnangagwa) to be hostile — not at this time. He is determined to succeed (President Robert) Mugabe and he will need Western support to rebuild his shattered country if he does, which is presumably why he gave me an almost unprecedented interview.”

In the story, the reporter also states that “Mnangagwa did not admit he wants to be president, of course. Given Mugabe’s paranoia that would have been political suicide. On the contrary he was studiously loyal.”

The reporter also states that he met the former war veterans minister and Zimbabwe National Liberation War Veterans’ Association chairperson Christopher Mutsvangwa who told him that “he was 100% sure that Mnangagwa would be the next president”.

Mutsvangwa, a strong Mnangagwa ally, was ousted from Zanu PF for denigrating the first family as well as for suggesting that Mugabe should hand over power to his deputy. Sources said Mutsvangwa’s comments in the New Statesman interview infuriated the G40 kingpins who have been using the comments as part of their evidence that Mnangagwa was plotting to topple Mugabe. Mnangagwa has however denied the allegation that he has been working with the war veterans.

The New Statesman article also states that the reporter was given “a secret document which emanated from Mnangagwa’s camp. It accuses G40 of plotting political euthanasia against the party’s founding generation and of coercing the first lady into a spirited campaign against VP Mnangagwa.”

The G40 proponents are also bitter that in the interview Mnangagwa denied that he played a role during the Gukurahundi atrocities where more than 20 000 people were killed soon after independence.

According to the article, Mnangagwa denied such accusations.

“How do I become the enforcer during Gukurahundi? We had the president, the minister of defence, the commander of the army and I was none of that. My own enemies attack me left and right and that is what you are buying.”

The article also projects Mnangagwa as a reformist who “might offer Zimbabwe economic recovery”.