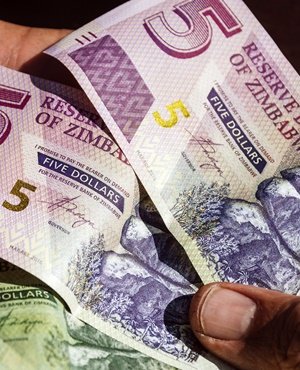 The move was bold, and many did not see it coming.

In a bid to defend the new and fledgling Zimbabweandollar against black market speculation, the country’s finance minister on June 25 outlawed using United States dollars and other foreign currencies in local transactions. When news of the policy broke, Harare-based independent economist John Robertson thought it was a bad practical joke.

“I am not fully convinced it’s genuine,” Robertson told Al Jazeera. “This idea is so bad it’s a cause for concern. I fear it may be an attempt in government to cause someone embarrassment. We hope it is revised.”

Zimbabwe’s finance minister, Mthuli Ncube, had hinted on several occasions that a new Zimbabwean dollar was in the works. The country had already made a move toward it earlier this year, when it introduced an interim currency, the Real Time Gross Settlement (RTGS) dollar or “Zimdollar”.

But a decade after devastating hyperinflation prompted the country to “dollarise” its economy by allowing the US greenback and other foreign currencies to be used as legal tender, many Zimbabweans are sceptical about the stability of the country’s new currency and worried about what could happen if their livelihoods are tied to it.

Not even six months old, the fledgling Zimdollar has suffered from speculative attacks that saw its value plummet by more than 150% before recovering.

For 67-year-old David Mkono, the country’s new currency has just added to his myriad problems. Mkono worked as a boilerman for Zimbabwe’s power utility company for 47 years, paying into his pension in US dollars from 2009 until he retired last year.

Some economists see Zimbabwe’s swift outlawing of the US dollar as justified, given most countries that dollarise their economies fail to successfully reintroduce a new local currency.

“It’s a chance to disprove the notion that once an economy dollarises, it can’t have its currency ever. Many countries have failed,” Kipson Gundani, a Harare-based economist and executive director of the CEO Africa Roundtable, told Al Jazeera.

While dollarisation can help stabilise an economy in the throes of hyperinflation, there are drawbacks. Local currencies are a powerful symbol of sovereignty and national identity. Countries that dollarise also lose the power to directly influence their own economy through monetary policy.

But Zimbabwe’s economy is not exactly fertile ground for a new currency to take root. The country is likely in recession and the International Monetary Fund predicts the economy could contract 5.2% his year. Industry is operating at less than half of its installed capacity. Reliance on imports – which become more expensive as the local currency weakens – is stubbornly high.

Mkono, who has two children aged 12 and 8, says soaring inflation is already making it difficult for him to provide food for his family. “The prices have gone up rapidly in the shops,” he said. “When I get my monthly allowance, we realise that we can’t buy basic things like mielie meal after paying for things like school fees.”

Mielie meal is Zimbabwe’s staple food, and is made from maize or corn.

But some economists maintain that Zimbabwe had to take bold steps to defend its sovereign currency, even if conditions weren’t perfect.

“Even if fundamentals were not yet right, the use of multi-currencies was not sustainable,” said Gundani. “We are not producing optimally, we are vulnerable on the import cover and our economy is in recession on a GDP level. But we are coming from a background where the RTGS was already in circulation along with other currencies and was depreciating against the US dollar at an alarming rate.”

And while confidence in the new currency may be in short supply, Gundani believes that if policymakers show discipline, the Zimdollar may yet have a shot.

Last week, the Reserve Bank of Zimbabwe removed US$1.4bn (about R19bn) from circulation to shore up the Zimdollar and announced it would inject US$48.7m (about R689m) into the economy. [These figures are based on black-market exchange rates calculated at the time of publication.]

A day after the announcement and the mop-up exercise, the Zimdollar recovered some 40% of its value against the US dollar on the black market.

“I believe this is an opportunity to create that confidence by doing the right things and desisting from doing the things that killed the first Zimbabwe dollar, such as printing money to finance budget deficits,” said Gundani. “It’s a big gamble that we cannot afford to lose.”