Company controlled by ‘Zimbabwe’s richest man’ on verge of bankruptcy

Source: Company controlled by ‘Zimbabwe’s richest man’ on verge of bankruptcy – The Citizen 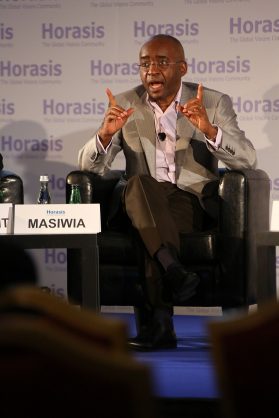 Econet Media is working to find a way to keep operating or salvage what it can.

A report by TechCentral on Friday suggested that heavy debts and economic problems in Zimbabwe of $130 million (R1.8 billion) hitting Econet Media have led to the company going into administration.

The company, controlled by billionaire Strive Masiyiwa, often described as Zimbabwe’s richest man, was not able to pay suppliers and hired an insolvency practitioner, Ernst & Young, to try to save the business.

Masiyiwa is a London-based Zimbabwean businessman, entrepreneur, and philanthropist. He is the founder and executive chairman of diversified international telecommunications, media and technology group Econet Wireless.

Econet launched the Kwese Play internet streaming service in South Africa in 2017 and owns 20% of Kwese Free TV. This is a separate company and is believed to be largely unaffected. It still has until March 2021 to launch its free-to-air terrestrial broadcasting service, the first in South Africa to be licensed since e.tv in the 1990s.

Econet’s letter to creditors blamed the “current macroeconomic conditions in Zimbabwe” for its cash problems, adding “the company has been seriously affected by the currency regime” in the country.

Their letter said: “In the circumstances, the directors believe that it is in the best interests of the company and its creditors that (it) be placed into voluntary administration … and for an administrator to be appointed.”

They hope to keep operating or salvage as much as possible.