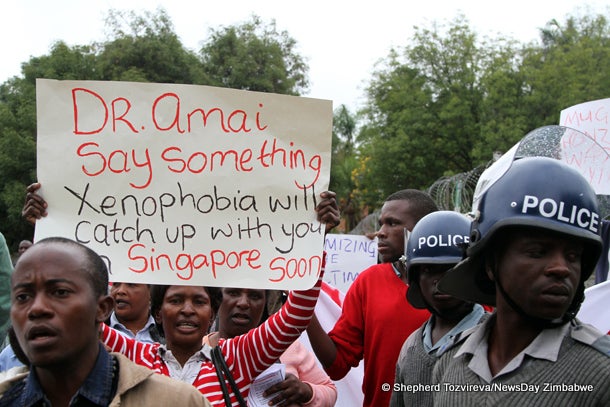 My name is Boipelo Manyowa. I am black. I am 28 yeays of age. I am an African, but am ashamed to stand and be counted as South African.

I think I am a pebble in the sea; that is how small I am and probably also how much small my opinions matter in the ocean.

But I cannot, as a human being, an African, a mother and a wife remain silent. In the last few days, local criminals ran riot, attacking fellow black Africans in the name of fighting crime. Their method of dealing
with crime has been to commit more crime (I will touch on this later).

The most unfortunate thing about all this is that they have targeted the most vulnerable members of our community (Yes, foreigners are a part of our community as long as they call our country home).

People who have travelled great a distance just to provide for their families are being targeted, beaten, stoned, burnt alive and their properties destroyed.

This is wrong on all levels.

A 100 years ago, some of these borders did not even exist. European gangsters colonised our land and told us we were different. They divided us and shared our land among themselves as if it were some slices of pizza.

Years after defeating these racists, we now enforce their borders and their definitions of our forced differences louder than they do. Ironically, the Chinese run several businesses with appalling working
conditions for blacks. Eastern Europeans run criminal enterprises, left right and centre. These people are never called foreigners nor are they ever defined as different from us.

It hurts me because everywhere I have travelled, first as a young student and then as a budding businesswoman and later as a companion to my husband, I have been treated with so much love and respect.

From the warm streets of Lilongwe (Malawi), to clean ones in Rwanda and the mesmerizing ones in Nairobi (Kenya), I have been loved and respected. I have lived in these places with an unshaking sense of peace and
security, something I can only yearn for among my fellow Africans in South Africa right now.

My husband is a 29-year-old Zimbabwean gentleman who I have known since 2003 and loved for years. He was my pen pal who became my everything. He is a very complicated man of many talents and weaknesses in equal measure. When he first came to South Africa, he was fleeing persecution by his government for his works. He is a journalist with an adrenaline addiction. He arrived in Pretoria with a dream; a dream that made me give up everything to be a part of.

Together we have seen all, but one of the continents in this world. My family has grown to adore him, and he has made Zimbabwe a home for me, and a place of my burial after I die.

More importantly, my husband is responsible for over 20 children here in South Africa (and he will be upset I let this secret out). These children are South African and all, but two are orphans. He does not make a lot of money (journalists are poor), but the little he makes is used to change lives.

Perhaps I should mention that my husband is no longer based in South Africa and only returns to perform critical business, only rarely. The orphaned children who look up to him, he has not abandoned or left alone.

From the shores of the far east, he makes sure they are fed and clothed. He does not see these children as South African, but just children. He is not alone, and not an exception to the rule, but much rather just a
norm.

I have had the absolute pleasure of living in Zimbabwe for a considerable amount of time too. I love the people there; their amazing culture and the serene beauty of the landscapes. My stay, as indeed my contact with many Zimbabweans, has not always been pleasant.

I have been insulted, heckled, attacked, lied about, harassed and bullied, among many other despicable things by strangers who do not even know me. These people have since made up their minds that I deserve to be hated. It’s not a lie that my nationality played some part in this too.

Comments asking for “that South African b*tch to be raped and killed together with Maynard (my husband)” are something I deal with daily, but have never gotten used to though I refuse to let it affect me (I generally never allow other human beings to control my state of mind, let alone emotions).

As you can see, I have had several unpleasant encounters with Zimbabweans, but I don’t recall being made to feel any less Zimbabwean (Yes, I am a Zimbabwean).

Despite all the abuses I have faced, I have never had Zimbabwean people attempt to set my business alight in Harare, or my car or my house. To add to that, I have learnt over the time that the cruel and abusive hounds that dislike me and abuse me are just about a dime dozen. I can never allow a few rogue elements in a country of 18 million people (local and abroad) to define my relations with everyone else.

Zimbabweans, like Malawians, Zambians, Kenyans, Tanzanians, Sudanese, Congolese and Burkinabe are among the warmest, hardworking and honest individuals I have ever met. As my experience has taught me with Zimbabweans (I interacted with them a lot) and Malawians (my husband works for and with Malawians), there are always bad apples out there.

I am saying this because I hope that my own brothers and sisters committing these acts know that crime has no nationality. I have been the victim of crime on four different times, and not once were my assailants foreign.

I grew up in the North West before moving to Pretoria. It’s simply not true that it’s only foreigners who commit crime. This evil scapegoating is wrong and really makes me hang my head in shame.

I also do not understand how people fight murder by killing people, stoning cars, or firing randomly at passing trucks. Is that not also a form of criminal behaviour itself?

I mean, ever since all this began, the only people I have seen committing arson, robbery, malicious damage to property, attempted murder and assault are South Africans. The people they claim to be criminals, many of them poor, vulnerable women and children, are only running for dear life. So, who is the real criminal there?
I am yet to see any drug lords busted in this crime spree. I am yet to see any real criminals arrested. All I see and have seen is desperate vendors, barbers, car guards, and cleaners being targeted.

A lot of what is happening right now makes me sick to the marrow. It also makes me hurt in deep places. Some of this just makes me angry too.

I am one of those people who just does not want to bear testimony to things I did not see, so I won’t speak about the role other countries played in South Africa’s independence. I will speak as a human being, with a basic sense of compassion for others; as a black African who has called nine African countries home.

Even as I write this, my heart is heavy because, in places like far flung Hong Kong, where blacks are as rare as hen’s teeth, my husband and I have been allowed to settle, establish business, and exist on this planet without being made to feel like some kind of “other”.

What you are doing fellow South Africans is wrong, whichever way you will want to justify it. You are the criminals and not the other way around, and I am ashamed that people look at me and think I, too, think like you.

Again, I think I am a pebble in the sea, that is how small I am and probably how small my opinions matter in the ocean. But we all need to reflect.

Newer Post
Robert Mugabe: The greatest trick the devil ever played
Older Post
OPINION: Mugabe’s legacy remains alive and it must be defeated