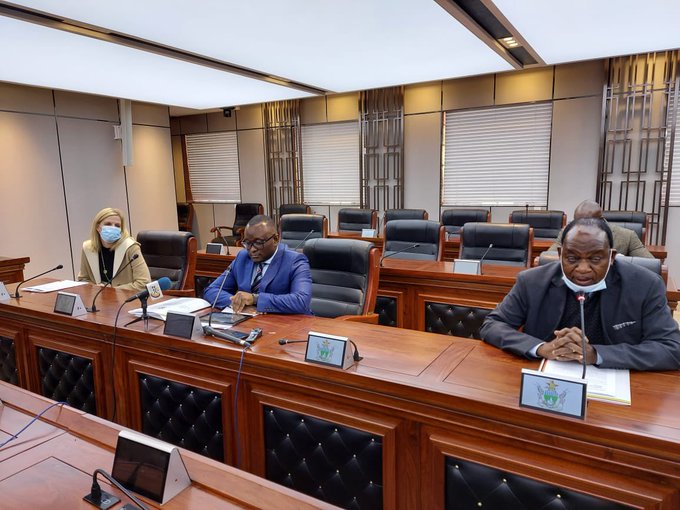 Cabinet considered Zimbabwe’s response to the COVID-19 pandemic, and the report on the procurement and roll-out of vaccines, which was presented by the Vice President and Minister of Health and Child Care, Honourable C.G.D.N. Chiwenga.

Cabinet wishes to inform the nation that as at the 29th of May, 2022, Zimbabwe’s cumulative COVID-19 positive cases had reached 252 156, with 243 992 recoveries. The recovery rate was 97%, with 2 663 active cases recorded. The overall number of new cases increased slightly during the week, with 1 454 cases recorded, compared to 1 440 the previous week. An average of 208 new cases was reported per day, compared to 206 cases the previous week.

The cumulative numbers of vaccinations since the outbreak of the pandemic in 2020 have now reached 6 223 915 for the first dose, 4 524 556 for the second dose, and 810 605 for the third dose. The public is urged to continue seeking vaccination.

Cabinet considered and approved the exemption of Hwange Electricity Supply Company (HESCO) from entering into long term coal supply agreements under the Hwange Expansion Power Project as presented by the Honourable Vice President and Minister of Health and Child Care, Dr C.G.D.N. Chiwenga.

The nation is informed that Government embarked on various infrastructural projects to underpin the transformation of the country’s productive capacities. One such landmark project is the Hwange Expansion Power Project, which is expected to significantly contribute towards the   re-vitalization of the agricultural, industrial, manufacturing and mining sectors. On completion, the project will contribute an additional 600 MW to the national grid.

Cabinet received the Final Report on Zimbabwe’s participation at Expo 2020 Dubai, held from 1 October 2021 to 31 March 2022, as presented by the Minister of Foreign Affairs and International Trade, Honourable Fredrick Shava.

The nation is informed that Zimbabwe was one of the 192 countries that participated at Expo 2020 Dubai, where it showcased its unique opportunities in trade and investment, its distinct cultural heritage, socio-economic activities such as mining, tourism, agriculture, health, education, arts and culture among others.

The country was also promoting the engagement and re-engagement Agenda and unpacking the country’s Vision 2030. Feedback indicates that the overall objectives were met through the main exhibition and complementary events. However, key stakeholders are undertaking an appraisal of the country’s participation at the Expo.

Regarding the Invest, Trade and Visit Zimbabwe drive, a lot of enquiries were received during the period. A number of Joint Venture Agreements were signed during the Expo.

Two Diaspora engagements were held during the period. The first one was attended by the Vice President and Minister of Health and Child Care, Honourable C.G.D.N. Chiwenga, while the second one was graced by His Excellency, the President.

Very successful engagements were conducted during both forums, where the diaspora community expressed interest in investing in various sectors of the economy. Zimbabwe’s “National Day” was held on 14 March 2022, and was dedicated to celebrating Zimbabwe as a nation.

Cabinet received a report on the Tourism Accounting Findings and Policy Implications as presented by the Minister of Youth, Sport, Arts and Recreation, Honourable Kirsty Coventry, as the Acting Minister of Environment, Climate, Tourism and Hospitality Industry.

Cabinet wishes to inform the nation that in line with the National Development Strategy, (NDS 1 2021-2025), Government undertook to develop the Tourism Satellite Account (TSA), in order to improve the accounting of the performance of the Tourism Sector.

A Technical Working group led by the Zimbabwe National Statistical Agency (ZIMSTAT) produced the TSA. The TSA is an internationally adopted statistical tool for the measurement of tourism’s contribution to the Gross Domestic Product (GDP), trade and employment in an economy.

The nation is informed that the major findings of TSA are as follows;

The Minister of Foreign Affairs and International Trade, Honourable Dr Frederick Shava, presented the Report on His Excellency the President’s Participation at the 2022 World Economic Forum, which was held in Davos from 24 to 26 May, 2022.

Cabinet would like to highlight that His Excellency the President’s presence and active participation in various high-level events at the Forum, as well as the calibre of private and public sector leaders the President was able to interact with, significantly boosted Zimbabwe’s engagement and re-engagement drive and helped in conveying an accurate picture of developments in Zimbabwe. All in all, His Excellency the President participated in various events, including the following:

His Excellency the President co-chaired two sessions and was also given the honour of delivering the opening remarks in a third session. On the sidelines of his busy World Economic Forum schedule, the President found time to meet senior executives of two Swiss companies with operations in Zimbabwe, namely: Holcim-Larfage, global cement and other construction materials manufacturer; and Sygenta Agri-chemicals.

In keeping with his tradition wherever he travels, His Excellency the President traveled to Zurich where he met Zimbabweans in the diaspora, including those based in Germany, Poland and the United Kingdom.

Cabinet received and adopted the Report on the Visit to the Republic of Indonesia undertaken by the Vice President and Minister of Health and Child Care, Honourable Dr C.G.D.N. Chiwenga, to attend the 2022 Sector Ministers’ Meeting on Sanitation and Water for All.

The Vice President and Minister Health and Child Care, Honourable Dr C.G.D.N. Chiwenga delivered the Meeting’s Key Note Address, highlighting the challenges brought about by the COVID-19 pandemic, economic downturn and climate change. The 2022 Sector Ministers’ Meeting on Sanitation and Water for All agreed on the need for urgent action on the following, among others:

Furthermore, the Bio Farma pharmaceutical company representatives are expected to visit Zimbabwe and explore possibilities of signing a Memorandum of Understanding to establish a joint venture with a Zimbabwean State-owned company to manufacture vaccines. In addition, PT LEN of Indonesia will explore investment opportunities in the renewable energy and rail signaling systems, while PT Pindad will explore partnerships with authorities in the defence industry.

The Minister of Foreign Affairs and International Trade, Honourable F. Shava, presented the Report on the 16th Extraordinary Summit on Terrorism and Unconstitutional Changes of Government which was held in Malabo, Equatorial Guinea on 28 May, 2022. Cabinet adopted the Report.

The Summit which was held under the theme “Robust Response, Democracy and Collective Security”, provided the proper platform for AU Heads of State and Government to deliberate on the adoption of timeous strategic interventions to address the two interrelated vices of terrorism and unconstitutional changes of Government, which are at the core of complex political and socio-economic challenges bedeviling the continent.

In particular, the efforts of the AU, the Regional Economic Communities (RECs), and individual Member States to address the threat of terrorism and vulnerability of African States were highlighted. The Summit concluded that there should be adherence to the AU principles, norms and shared values.

Cabinet informs the nation that two major documents were produced by the Extraordinary Summit, namely: the Malabo Declaration; and Decisions on Terrorism and Unconstitutional Changes of Government. On Terrorism, the Declaration, among others, resolved as follows:

Regarding Unconstitutional Changes of Government, the Summit:

The Decisions of the Extraordinary Summit, among others:

Cabinet stresses that the Summit’s major outcome was the unanimous affirmation by African leaders that terrorism and unconstitutional changes of Government were not welcome on the continent. The Meeting was an endorsement of Africa’s goal of providing African solutions to African problems.