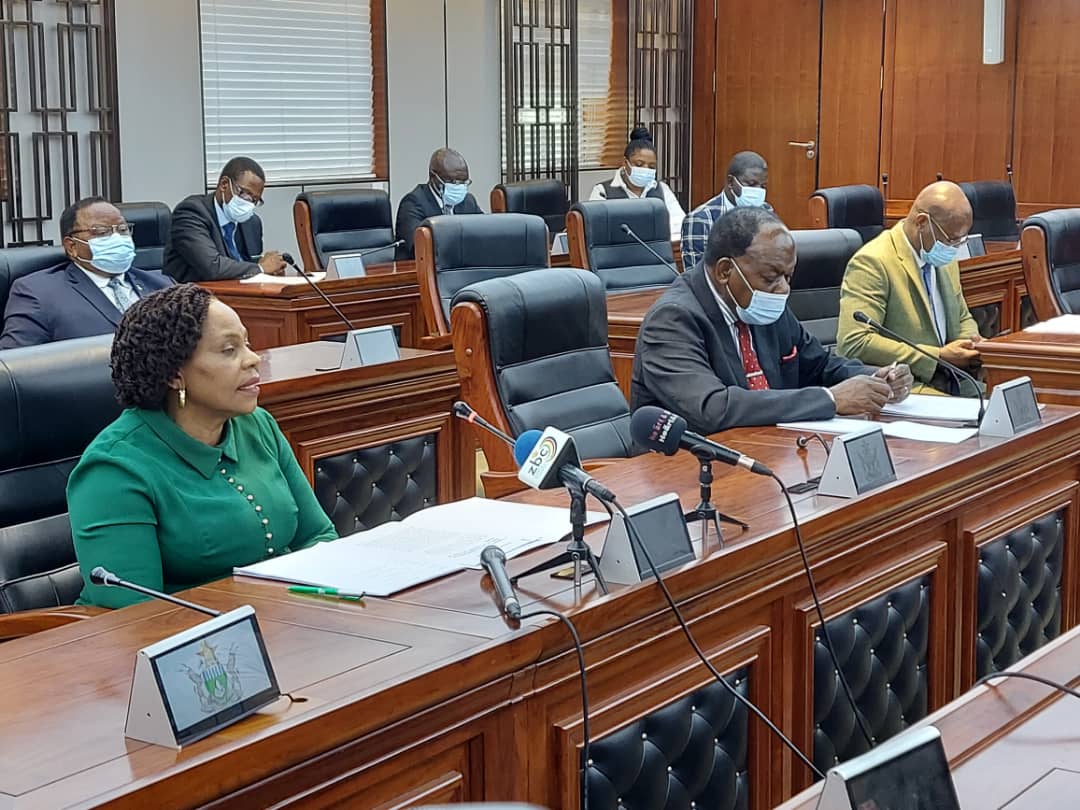 Cabinet received an update on the Country‘s Response to the Covid-19 Pandemic and a Report on the Procurement and Roll-Out of Vaccines,  as presented by the Chairman of the Ministers’ COVID-19 National Committee, Vice President and Minister of Health and Child Care, Honourable Dr. C.G.D.N. Chiwenga.

While the country is doing well in its response to the COVID-19 pandemic, Cabinet, nonetheless, calls upon citizens to remain vigilant and strictly observe the national and World Health Organisation (WHO) COVID-19 protocols, and the relevant regulations will continue to be strictly enforced. Furthermore, there is need to closely monitor the situation in schools for the coming few weeks before allowing the resumption of sporting activities in the institutions, given that the re-opening of schools and onset of winter is usually associated with increased cases of COVID-19.

Regarding the national vaccination programme, Cabinet wishes to inform the nation that, as at 9 May 2022, a total of 5 924 932 first doses of the COVID-19 vaccine had been administered, while 3 868 126 people had received their second dose, and 647 049 their third. This translates to a national coverage of 53%, up from the 52% recorded the previous week. Cabinet calls upon all citizens that have not been vaccinated to present themselves for vaccination at centres nearest to them. All provinces will now ramp up vaccination under the Phase II Vaccination Blitz Campaign Programme by working closely with community leaders.

The Minister of Finance and Economic Development, Honourable Professor Mthuli Ncube, presented the Proposed Partnership between Dinson Iron and Steel Company (Private) Limited and  the Zimbabwe Electricity Transmission and Distribution Company (ZETDC) for the Construction of a 330 kiloVolt (kV), 100 kilometre (km) Electricity Line from Sherwood (Kwekwe) to Manhize, Chivhu, which was approved by Cabinet.

Cabinet would like to highlight that Dinson Iron and Steel Company (DISCO) (Pvt) (Ltd) is setting up a Greenfield Integrated iron and steel plant, alongside mining  of iron in the Chivhu District of Mashonaland East Province and Chirumanzu District of the Midlands Province. The US$750 million investment will significantly contribute to the country’s economic growth.

DISCO has accordingly applied to be connected to the national electricity grid in order to access the requisite power for its plant operations. The electricity transmission line will stretch from the Kwekwe-Sherwood Substation to DISCO’s iron and steel manufacturing plant at Manhize in Chivhu.

To finance this connection, ZETDC will enter into a Public Private Partnership (PPP) agreement, whereby DISCO will pre-finance both phases of the construction project, as a loan to the utility company. The loan will be recovered from ZETDC through deductions from DISCO’s monthly bills until the loan is paid up, over an estimated 5-year period. Cabinet invites the public to note that this electricity line will not only be dedicated to DISCO, but will also be available to other ZETDC customers along the way.

In term of the PPP, the utility will use 40% of the electricity. During Phase I of the project, DISCO will require only a fraction of its 60% allocation, leaving the rest available to ZETDC. The partnership will, therefore, allow DISCO to access a reliable and regular supply of power from ZETDC for their iron mining and processing operations on time. Local communities will also benefit by receiving consistent  power supplies.

Other benefits of the power-line project include the following:

Cabinet received an update on the localisation of the Fertilizer Value Chain, as presented by the Minister of Industry and Commerce, Honourable Dr. Sekai  Nzenza.

Cabinet wishes to inform the nation that the local fertilizer industry is accelerating the implementation of the Five-Year Fertiliser Import Substitution Roadmap (2020-2024). The objective is to increase local production of phosphates and ammonium nitrate in order to reduce fertilizer imports. To this end, the Industrial Development Corporation of Zimbabwe (IDC) has invested into the local fertilizer value chain, from extraction of phosphates to the granulation of basal fertilizers. The company is modernising operations at its subsidiaries at Dorowa Minerals and Zimphos in order to increase production. Meanwhile, Sable Chemical has secured a loan from Afreximbank for the refurbishment of its plant and equipment as well as purchasing rail tank cars. Sable Chemicals’ target is to produce 120 000 metric tonnes of Ammonium Nitrate for the 2022/23 farming season.

Cabinet notes that the fertilizer production sector plays a critical role in ensuring successful agricultural production, which is the bedrock of our economy.  Government is thus looking at ways of recapitalizing the sector, including through listing on the stock exchange in order to attract suitable investors.

Regarding the 2022 Winter Cropping Season, Cabinet wishes to inform the nation that the local fertilizer industry has adequate stocks to supply the existing Winter Input Programmes as well as other commercial and retail needs. The available fertilizer includes carry-over stock from the previous season and stocks under the Collateral Management Arrangement (CMA), which will be released once the required funding has been disbursed.

Cabinet received reports on progress made in the implementation of priority projects for the 1st  100-Day Cycle of 2022, as presented by the Ministers of Foreign Affairs and International Trade, Primary and Secondary Education, Public Service, Labour and Social Welfare, and the Minister of State for Presidential Affairs and Monitoring Implementation of Government Programmes.

Honourable Gumbo also presented an overview of progress made on projects under the Ministry of Justice, Legal and Parliamentary Affairs, on behalf of Honourable Ziyambi Ziyambi, including agricultural projects on prison farms, construction of 17 blocks of houses at Chikurubi Maximum Dog Training School and Gunhill Staff Housing Project, decentralization of the Legal Aid Directorate (LAD) to District Level, and Construction of the Lupane, Gwanda, Chiredzi, and Epworth New Magistrate Court Complexes.

Cabinet considered and approved the Electricity Amendment Bill, 2022, which was presented by the Attorney-General, Honourable Prince Machaya, on behalf of the Minister of Justice, Legal and Parliamentary Affairs.

ZESA is suffering huge losses due to theft and vandalism of the national electricity infrastructure. In 2021, ZESA recorded 1 237 cases of theft and vandalism, resulting in huge losses of of revenue, which could have been used for development. The Amendment Bill will deter would-be offenders through stiffer and mandatory sentences.

The Attorney-General, Honourable Prince Machaya, again presented the Memorandum of Understanding between the Republics of Zimbabwe and South Africa in the Field of Basic Education, which was adopted by Cabinet.

The Memorandum of Understanding (MoU) will foster co-operation between the two Parties in the following areas, among others:

The nation is informed that the Assessment Team sought to evaluate Zimbabwe’s bid to host the AMA Headquarters as well as to inspect the relevant facilities. The AMA delegation was led by Professor Aggrey John Douglas Ambali, from the African Union Development Agency (AUDA), while the Zimbabwean team was led by the Minister of Foreign Affairs and International Trade. Zimbabwe had submitted its bid to host the AMA Headquarters in July 2021.

The team embarked on verification visits of all sites being offered by Zimbabwe in its bid to host the Headquarters.  The sites visited were as follows:

Cabinet was briefed by the Minister of Local Government and Public Works, Honourable July Moyo, on the Urban Areas Public Transport System, following His Excellency the President’s Statement on the opening up of the of the public transportation sector to private players.

Government is in process of coming up with  relevant regulations to enable liberalization of the public transport sector. These will include the licensing of operators on any given route. The regulations will go a long way in alleviating the plight of urban commuters. Government takes this opportunity to assure citizens that it has the travelling public’s interests at heart, and will expend all efforts to ensure that the situation is expeditiously ameliorated. The nation will be kept abreast of developments on this matter.