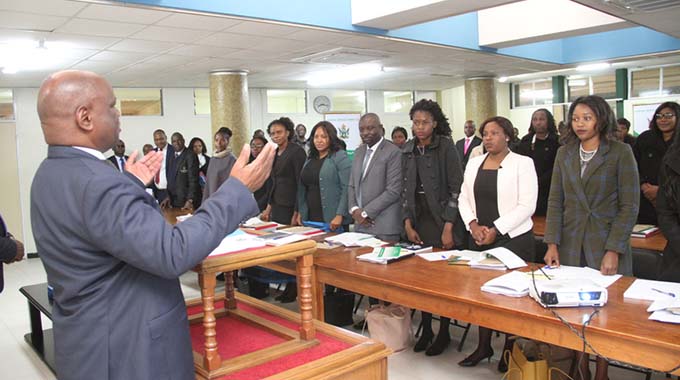 Chief Justice Luke Malaba welcomes newly-appointed magistrates to a mandatory seven-week induction course being run under the auspices of the Judicial College of Zimbabwe in Harare yesterday. – (Picture by Innocent Makawa)

Daniel Nemukuyu Senior Reporter
CHIEF Justice Luke Malaba has introduced a mandatory seven-week rigorous training course to be undertaken by all new magistrates before they take judicial oaths, in his quest to improve the quality of justice.

In the past, the Judicial Service Commission (JSC) would recruit magistrates straight from university and attach them to individual senior judicial officers for some time before being weaned off.

However, the judiciary boss said the system left the Commission with half-baked magistrates who compromised the quality of justice dispensed at courts.

In terms of the new orientation training, the law graduates are exposed to a standard grooming in all important aspects of the work of a magistrate.

The programme, that is being run by Judicial College of Zimbabwe principal Mr Rex Shana, will include courses like the civil and criminal procedure, maintenance inquiries, assessment of evidence and judgment writing.

It equips magistrates with the practical skills of presiding over cases.

“A judicial officer must be a person whose integrity is beyond reproach. The restrictions imposed by the profession of a judicial officer demand that you forego some of the luxuries and activities that you may have previously considered harmless to your reputations,” he said.

The Chief Justice, who is a passionate trainer, will personally take the 60 recruits for judicial integrity lessons while Mr Shana will take care of the other areas.

Selected judges of the Supreme Court and the High Court will also train the new magistrates.

JSC also selected seasoned legal practitioners and administrators to be part of the trainers.

The judiciary boss said universities were simply offering academic training for legal practitioners but the in-house training was to offer practical training for professional magistrates.

“All that the institutions do is to teach the theoretical aspects of the law and unleash law graduates into the market.

“Unfortunately, for purposes of being a judicial officer, that training is inadequate,” he said.

Allowing the graduates to rush to the bench without adequate training was tantamount to encouraging the new judicial officers to carry out experiments on the litigants.

“A judicial officer cannot and must not run experiments with litigants.

“As already said, the gaps are clearly a result of the unstructured and uncoordinated internship regime,” said the Chief Justice.

The training started on Monday at the Harare Magistrates Court premises and it will run for seven weeks.

The 60 will be deployed to various stations countrywide after the swearing in ceremony.