In locked down Zimbabwe, authorities intensify clampdown on dissent

ZIMBABWEAN authorities have stepped up their onslaught against dissent by arresting several university students and a unionist for allegedly protesting against the clampdown on human rights defenders and demanding an improvement in working conditions for teachers.

Source: In locked down Zimbabwe, authorities intensify clampdown on dissent – The Zimbabwean 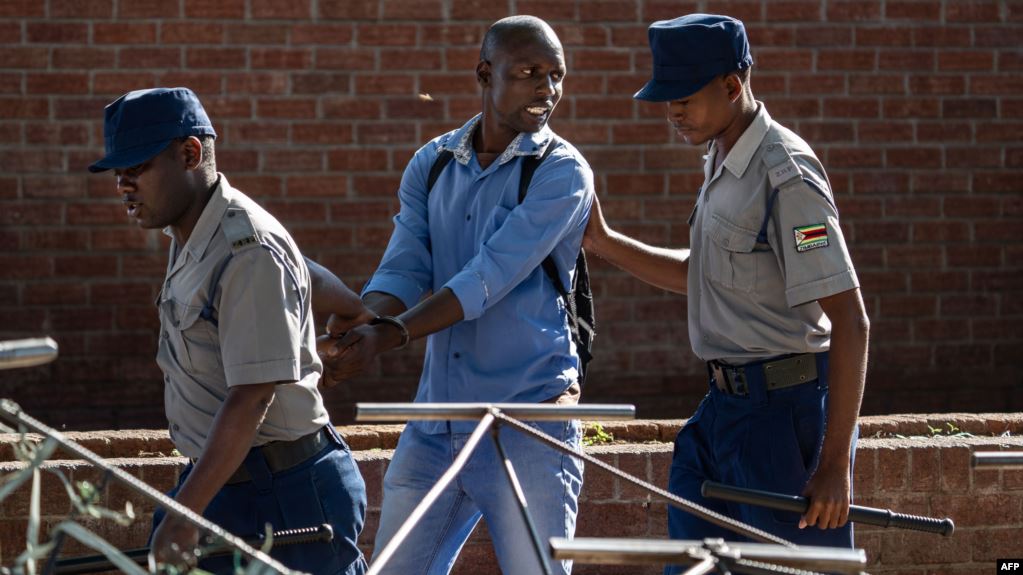 FILE: A man is arrested by police officers after resisting orders to vacate a vegetable market area in Bulawayo, Zimbabwe, March 31, 2020, on the second day of a lockdown to curb the spread of COVID-19.

In Chinhoyi in Mashonaland West province, Zimbabwe Republic Police
(ZRP) members on Monday 22 June 2020 arrested eight students at
Chinhoyi University of Technology (CUT) and charged them with
participating in a gathering likely to promote public violence, breach
of peace or bigotry as defined in section 37(1)(a) of the Criminal Law
(Codification and Reform) Act alternatively contravening section 7(5)
of the Maintenance of Peace and Order Act for allegedly failing to
notify the regulating authority.

ZRP members claimed that the CUT students, who are represented by
Kudzai Choga of Zimbabwe Lawyers for Human Rights (ZLHR), raised some
placards with messages that read; “Free Netsai Joana”, “#Girl child
Excel”, “People Power” and “Justice for Netsai Cecelia Joana”. They
are all expected to appear in court on Tuesday 23 June 2020.

In Masvingo province, ZRP members on Monday 22 June 2020 arrested 53
year-old Shilla Chisirimunhu, who is the Amalgamated Rural Teachers
Union of Zimbabwe (ARTUZ) Provincial Secretary for Gender in Masvingo
and charged her with participating in a gathering likely to promote
public violence, breach of peace or bigotry as defined in section
37(1)(a) of the Criminal Law (Codification and Reform) Act
alternatively contravening section 7(5) of the Maintenance of Peace
and Order Act for allegedly failing to notify the regulating authority
of a protest.

ZRP members accused Chisirimunhu, who is represented by Martin Mureri
of ZLHR, of participating in an anti-government protest allegedly
staged by ARTUZ members in Masvingo where they allegedly served a mock
coffin at the Masvingo District Education Offices protesting against
poor remuneration by government and demanding payment of salaries in
United States dollars.

Chisirimunhu is expected to appear in court on Tuesday 23 June 2020.