In Zimbabwe, Women Dig for Aquamarine

As Iver Rosenkrantz and Patrick Tendayi Zindoga drove through the fertile countryside of northern Zimbabwe one day in late 2018, they noticed something out of the ordinary: A woman who had just started plowing a field with a few oxen under the scorching sun was entirely on her own.

The business partners, who had recently acquired almost 125 acres nearby to mine aquamarine, took note because subsistence farmers rarely work alone, usually having the help of their children or other people. Several hours later, when they drove by the field again, they were impressed by her progress. “She’s so strong,” Mr. Rosenkrantz recalled thinking at the time, “she would put any man to shame.”

Getting out of the car and conversing with the woman in a mix of English and Shona, a Bantu language spoken by local people, the men asked whether she might be interested in what they now market as Africa’s — and possibly the world’s — only mine to employ an entirely female work force.

Today Rutendo Chigwajara, a 42-year-old divorced mother of three, is the assistant mine manager at Zimbaqua, outside the small town of Karoi.

“At first I thought it was a dream,” she said with a chuckle during a recent video interview. “It is very exciting because these women who work in the mines are now able to pay school fees for their children and they can also look after themselves.” 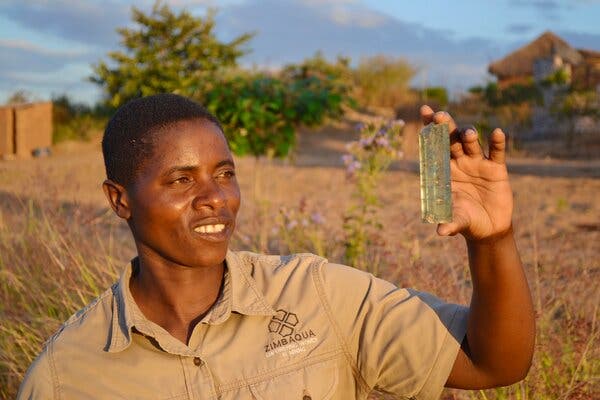 Ms. Chigwajara is one of 25 female miners, many of whom have little or no formal education, employed by Zimbaqua. It sells the gems they dig to international wholesalers and to jewelry designers like the New York-based Renna Jewels.

“They are beautifully crystal-clear, perfect aquamarine quality,” said Renna Brown-Taher, the brand’s founder and designer, who said she came across Zimbaqua on social media and used a number of the semiprecious gems in her latest collection. “Many of these women are the primary breadwinners in their families, and to be able to give women an opportunity to succeed and be empowered by supporting their families through the jewelry industry is a source of great pride for me.”

Gem and gold mining has long been a mixed blessing in Africa, providing much-needed income but — at unregulated or badly managed mines — creating dangerous working conditions and harm to the environment. As a result, some jewelry companies have left the market entirely, including Pandora, the world’s largest jeweler by volume, which said this month that it would stop using mined diamonds in favor of lab-grown ones.

Mr. Rosenkrantz, 42, and Mr. Zindoga, 40, said their decision to hire women at Zimbaqua was motivated by a desire to help, but it also was a tactical decision.

During their initial visits to mines in the region in 2018, the men said, they often saw women waiting outside the entrances. They asked whether the women were employed — about 11 percent of Zimbabwe’s 7.6 million women are small-scale or artisanal miners — but the women generally said no, they were just waiting to collect their husbands’ wages so the money wouldn’t be spent on alcohol.

The partners decided that hiring women would ensure a reliable work force. But, as Zimbabwe’s mining sector is both highly conservative and male-dominated, there was pushback.

“All the men were like, ‘Why are you employing the women when us men can do the job for you?’” Mr. Zindoga said, adding that he told them in a joking way, “‘If we give the women a job, we know you are going to eat every day and these women are more trustworthy than you fellas.’” (He said the government regulates the salaries so, regardless of gender, a miner is paid the equivalent of about $130 a month.)

Until the beginning of this century, Zimbabwe was known as the breadbasket of Africa, exporting tobacco, corn and wheat across the globe. But the corruption and political unrest during President Robert Mugabe’s final years in office, which ended with a military coup in 2017, pushed the country into a deep financial abyss.

Mr. Rosenkrantz, a former Danish military officer and lawyer, said that when he first went to Zimbabwe as a safari guide in the late 1990s the region around Karoi had almost 4,000 commercial farmers. Now there are fewer than 10.

The land, however, is still rich in minerals — including tourmaline, mica and rose and smoky quartz — and sits on a belt of aquamarine, the name used for gem-quality specimens of the mineral beryl.

“The problem was that people were not mining in a serious way so whenever they would harvest and spend all their money, they would go dig behind their house,” said Mr. Rosenkrantz, who also has helped set up small mines in Kenya and Tanzania and owns a bespoke jewelry company in Nairobi. “So there were definitely stones, but to find it we realized the best way was to start our own mine.”

The men said they spent most of 2018 finding the best land and getting the proper permits while they also slowly gained the trust of the local community. “You can come with all the documents and permits in the world,” Mr. Rosenkrantz said, laughing, “but if you do not have the blessing of the chief, you’re not going to mine there and they will make your life so miserable, you will never come back.”

Zimbaqua officially opened in January 2019, but as hiring and training were continuing there was little mining until early 2020. And then it had to close between March and June 2020 as a pandemic precaution.

To mine aquamarine, the men said, workers first remove the plants and topsoil (putting them aside so they can be replaced later) and then dig down to rock, a combination of feldspar, quartz and mica called pegmatite. Aquamarine usually is embedded in pegmatite, so the women drill a couple of feet into the rock and then use gel explosives to blast it apart. They use hammers — which weigh about 16 pounds — and chisels, jackhammers and hand-held rock breakers to free the gemstones.

Rumbidzai Gwinji, Zimbaqua’s mine coordinator, said that the miners still get excited when they find something. “They dance, they sing,” she said, “they are not afraid to show their emotions.”

Depending on the color, aquamarines can sell for anywhere from a few hundred to a few thousand U.S. dollars a carat. Mr. Rosenkrantz declined to say how much aquamarine the mine has produced, but said that, in April, it yielded a little more than two pounds of gems that could be used in fine jewelry and more than 100 pounds of low-grade stones. The stones are shipped to Bangkok for cutting and polishing, but the partners hope to train some women in the coming year to do the work on-site.

Before the mine even opened, the partners pledged that 10 percent of Zimbaqua’s profits would be earmarked for community projects selected by the women. This year a nonprofit organization, Zimbaqua Vision, is being established so the money can be used for a community center that will house a primary school, a pediatric clinic and a center for craft training.

Snohetta, an architectural firm based in New York and Oslo, is donating its work to design the space in partnership with a local architect. Construction is scheduled to begin later this year, with hopes that the opening will be in early 2022.

“Empowering women in a mining operation is something that would barely be on the radar in the West,” said Craig Dykers, a founding partner of Snohetta. “That is one reason why I find it powerful; it broadens our spectrum of understanding. It’s like the thorn in the lion’s foot, it’s the smallest things that have the biggest impact.”