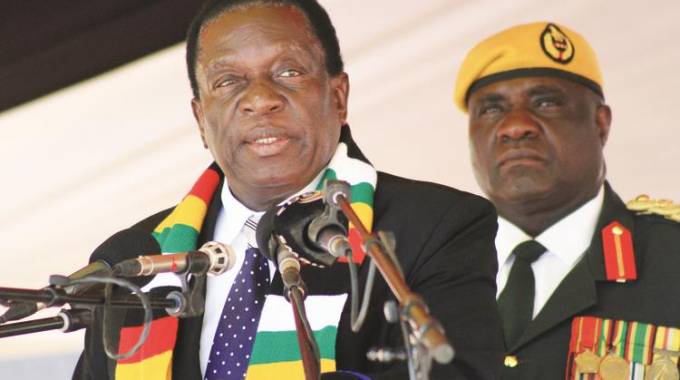 Munyaradzi Musiiwa Midlands Correspondent
President Mnangagwa has threatened to fire inept Provincial Ministers of State who fail to meet the targeted economic growth that is going to be set for their provinces, as part of the country’s economic turnaround strategy. Addressing captains of industry and businesspeople during the Buy Zimbabwe Conference in Gweru yesterday, President Mnangagwa said Government is in the process of crafting a template that will outline the target economic growth for each province and how it is going to contribute towards national economic development.

The President said the appointment of Provincial Ministers of State will therefore be based on merit and their contribution to the country’s gross domestic product (GDP) adding that those who fail to shape up, will ship out.

“I urge you individually and collectively within your various business member organisations to be united and be well coordinated so that you take full advantage of the opportunities that Government is availing through its engagement and re-engagement initiatives.

“Equally, I challenge the private sector to be drivers in our quest to have strong provincial economies with clear GDPs. We are crafting a template for all the 10 provinces so that we have competition among these provinces in terms of economic growth and the size of GDP. There is not a single province in this country that has peculiar advantages endowed to them and we need the leaders of those provinces to ensure they utilise the resources found in their provinces by competing with other provinces.

This is now for provincial ministers because their security shall depend on the growth of GDP in their provinces,” he said.
President Mnangagwa said the new dispensation was prioritising business and economics over politics.

He said his administration was committed to supporting local industries, particularly those that have scaled down production, that are distressed and those that have ceased operations due to economic challenges.

President Mnangagwa said his vision was to see Zimbabwe become a middle income economy with per capita income of $3 500 by 2030. He said he will live to see his dream come true.

“I would want to commend the Buy Zimbabwe team which has continued to work closely with both private and public sectors to drive the buy local message and encourage the purchase of local products and services so that local businesses can thrive thereby stimulating economic growth and creating decent jobs for us to be a middle income country by 2030. I chose 2030 and it’s not a magic year but I believe I will still be there,” he said.

President Mnagagwa said Zimbabweans must embrace the use of plastic money as this was now the global trend. He said some of the cash challenges emanated from the people’s failure to embrace plastic money.

“I know all of you are worried about cash. We are moving away from cash but this is a process. Do not misinterpret this and fail to vote for me, you should vote for me. Developed countries are now cashless economies. We cannot go back where they are coming from but we should go where the world is going,” he said.