Inside a Johane Marange birth camp

Source: Inside a Johane Marange birth camp – The Standard June 2, 2019 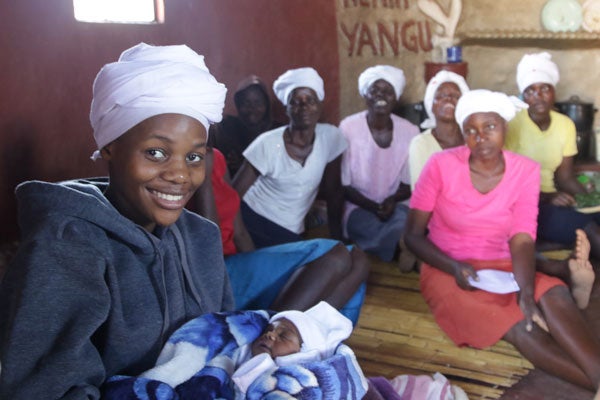 Pamela Mbiriza shows off her baby in a hut with other believers and birth attendants. Picture: Shepherd Tozvireva

Nestled under rolling mountains in the grassy meadows of Munaku village, Shamva district in Mashonaland Central, are 20 or so makeshift plastic tents dotted around a thatched hut.

Young, heavily pregnant women could be seen lounging in the sun, basking in its warmth.

They were chatting excitedly and the gentle banter spoke volumes about the camaraderie that forms the seam, which holds their little community together.

These women belong to the John Marange apostolic church and were in camp to give birth where they get assistance from older church members.

Elsewhere in the country in Manicaland province such camps are a common feature. Buhera is one of the areas where the camps are still functional.

The concept of maternal care is generally shrouded in mystery among religious sects in Zimbabwe and for this group a hospital is a no-go area.

Members of the Johanne Marange sect have set up their own health system, which they have maintained for years.

This is despite the fact that apostolic sect members in Zimbabwe have been associated with a higher maternal mortality.

Of concern for the Health and Child Care ministry and other stakeholders is the fact that the Zimbabwe National Statistical Agency says 38% of the country’s female population belongs to apostolic sects and that amounts to over 2,5 million people. That is too big a figure to ignore.

According to authorities, nine women die every day in Zimbabwe during and after birth. This is often in situations where there is no skilled health personnel to attend women while giving birth.

There are many apostolic sects in Zimbabwe, but the two that command sizeable following are the Johanne Marange and Johanne Masowe groups.

To establish why the ultra-conservative women were still shunning healthcare during maternity, this reporter visited a birth camp to talk to the women and hear their stories.

The Shamva birth camp is isolated from the rest of the village and the atmosphere is quite serene.

We were taken into a thatched hut, which was a bit spacious. About eight women were seated on the roughly made floor, shelling maize.

A young girl who looked no more than 15 years was lying on her back slightly obscured by the older women. She was heavily pregnant.

The bump was at logger heads with the young innocent face that peered at the visitors.

We introduced ourselves and explained why we were at the camp. We told them we were not there to judge but to learn from them.

One of the women, possibly a birth attendant, said their superior, Gogo Clarissa had gone to Shamva but the women were prepared to share their stories, hesitantly.

A young woman who looked like a teenager joined the conversation.

She was sitting on a thick blanket. Initially we assumed she was pregnant as well because of her protruding belly, but she told us she had given birth the previous day.

“My name is Pamela Mbiriza and I am a new mother. I gave birth yesterday,” she said.

Mbiriza proudly showed off her baby.

The women staunchly believe the Holy Spirit plays an important part and even handles the complicated cases.

“It is the holy spirit that tells us if the baby or the mother are in trouble.

“The same holy spirit is the one that protects the woman and the baby till birth,” said a birth attendant.

The older women were not comfortable giving out their names but were quite happy to have their pictures taken.

They giggled and jostled for the camera but none of them uses popular social media platforms like WhatsApp.

“The holy spirit is what guides us. For one to be accommodated here you must be a committed member of the church. We do not admit strangers,” said another birth attendant.

In place of proper abdominal scans for pregnant women, hands are used, while the Holy Spirit visions flushes out and steal with complications.

Treatment of complications is done with prayer and holy water. During labour there is no sterile equipment or infection control procedures that are followed.

Those who defy the church dictates and access formal medical services are perceived as being of “weak faith, defiled and elevating the medical system above God and thus taking away God’s glory”.

The women at the camp were happy, satisfied and completely at home. They have never gone to a health facility.

“I am 56 years old but I have never been to a hospital, my mother also never went to a hospital but look at me, I am healthy and I have given birth in these camps with no issues at all,” said one of the birth attendants.

Her professed age is a big shocker because she looks no more than 43.

Of slim built with bright intelligent eyes, she relied on her beliefs to see herself through life’s challenges.

“Besides in hospitals they have no medicine we know that and people say it all the time,” she says.

Community maternal care providers can allow clients to go back and check on the welfare of their families.

“We try to engage them because they are very important,” he said.

“We take note of their role in ensuring that pregnant women can have safe antenatal care, safe delivery and safe post-natal period and respectful care.

“We encourage them to give adequate health related information to mothers especially identifying danger signs and encouraging them to deliver in health facilities by a skilled birth attendant.”

He said they were concerned about women who might need Caesarean sections.