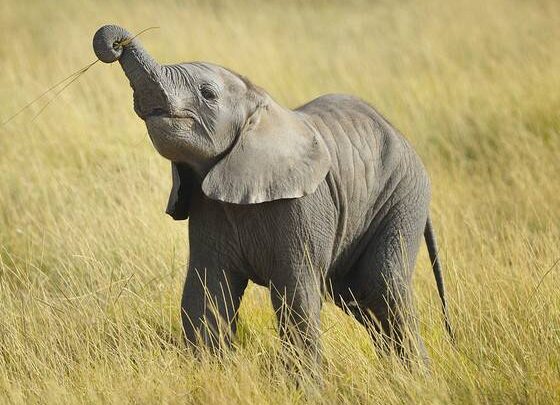 HARARE (Xinhua) — The COVID-19 pandemic has affected Zimbabwe’s primary source of funding for the conservation of elephants and other wildlife, resulting in a surge in incidents of human-wildlife conflict.

Incidents involving elephants killing people or destroying their crops have accounted for the bulk of cases of human-wildlife conflict reported in Zimbabwe so far this year, as the country continues to grapple with an overpopulation of the jumbos, according to the Zimbabwe National Parks and Wildlife Management Authority (ZIMPARKS).

Every year on Aug. 12, the World Elephant Day is observed across the world. The day aims to spread awareness about the plight of elephants and identify their importance in the ecosystem.

ZIMPARKS spokesperson Tinashe Farawo said in an interview Wednesday that his organization relies heavily on income from tourism to conserve and manage elephants but tourism had been badly affected by the pandemic.

The organization had received over 1,000 distress calls from affected members of the community since the start of the year, and over the last five years, nearly 400 people have been killed in incidents of human-wildlife conflict. Of the 400 deaths, about 50 percent are due to conflict with elephants, Farawo said.

“We have had to revise our budget in some cases by up to 80 percent. We rely on tourism for funding and tourism is as good as dead. We do require funding to fight poaching, for law enforcement and research,” Farawo said.

Currently, Zimbabwe has a population of over 100,000 elephants against an ecological carrying capacity of 45,000.

The jumbos are located in four main ecological zones, and two of the zones suffer from overpopulation.

The four zones are northwest Matabeleland where the country’s biggest game park Hwange is located, southeast Lowveld where the second biggest park Gonarezhou is based, the Sebungwe region and mid-Zambezi in the northern part of the country.

Of the four, northwest Matabeleland and southeast Lowveld have an overpopulation of elephants.

He said faced with an ever-growing population against the background of restrictions in culling, depopulation by moving animals to where they are less concentrated is the only medium to a long-term solution to managing the elephant population in the country.

In 2018, ZIMPARKS moved 100 elephants from the southeast Lowveld to mid-Zambezi and plans to relocate 600 more last year were affected by the COVID-19 pandemic, Farawo said.

“Our area of focus is to make sure that we depopulate where we have more concentration of animals to areas where there is less concentration. But that process is expensive. We don’t have money. We survive on tourism-related receipts but for the past two years there is no travel because of the COVID-19 pandemic,” said Farawo, who argued that the elephants must pay for their upkeep through commercial exploitation, including lawful hunting.

This, however, had not been effective in reducing the elephant numbers, he said, noting that since 1990, Zimbabwe had not managed to exhaust its yearly quota of 500 elephants.

He said for wildlife to thrive, there must be good habitat, good security, continuous research and abundant water and these required huge funding.

Farawo decried the loss of habitat in some of the elephant holding areas caused by the elephants themselves, leading to increased human-wildlife conflict as people and animals compete for food and water.

“In Hwange the destruction (of vegetation) is unbelievable. These animals are slowly becoming a danger unto themselves because they are destroying their own habitat and that of other animals.”

In 2019, Zimbabwe lost about 100 elephants due to starvation as a result of drought.

Farawo said it was regrettable that some Western-funded non-governmental organizations make unnecessary noise when Zimbabwe tries to commercially exploit its abundant elephant population, even though they do not contribute to the conservation of the animals.

Zimbabwe has the second-largest elephant population after Botswana and the fourth largest rhino population in Africa.

“We are the best to teach people on how to manage wildlife and how to manage elephants. We have done something good that people can emulate and what we deserve is a pat on the back. We don’t deserve some of the noises that come from London, New York and Copenhagen,” Farawo said.

For continued success in wildlife conservation, Farawo emphasized the need for continued collaboration with local people adjacent to game parks.

“We try to work with the communities for them to understand the value of the animals and for them to appreciate the value, they must benefit from the wildlife,” Farawo said. “We also use chili guns and beehives in some areas to scare away the elephants to try and reduce human-wildlife conflict.”

Newer Post
How does pointing out the Zimbabwe regime’s unmitigated failures equate to denigrating one’s country?
Older Post
Tycoon May Have Shifted Assets to Zimbabwe After U.S. Sanctions