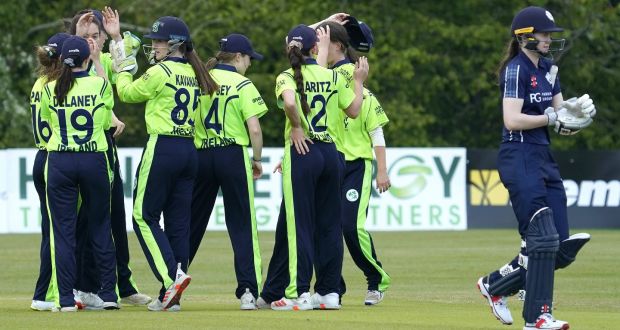 The Ireland cricket team have made it home from Zimbabwe after a four-flight journey. Photograph: Rowland White/Inpho

The Ireland cricket squad that rushed home early from the World Cup qualifiers has arrived back in Dublin after an arduous journey that has included four separate flights.

Upon arrival early on Tuesday afternoon, the group will undergo a 10-day hotel quarantine after starting their journey in Zimbabwe.

Last Thursday the qualifying tournament was thrown into chaos after the UK government designated seven southern African countries on their travel red list amid concern for the spread of the new Omicron variant. Ireland and the EU followed suit shortly after as travel to those countries was suspended.

Zimbabwe, the tournament’s host country, was one of those newly listed.

Once the new travel restrictions were introduced, the qualifiers were cancelled on Saturday with World Cup positions decided based on team rankings. Ireland missed out on the 2022 event, but were awarded a place in the ICC Women’s Championship, something that guarantees a busier fixture list in the coming years.

Since then, with no direct flights available from Zimbabwe to Ireland, the group of players and support staff have undertaken a multi-leg sequence of flights in order to return home.

Starting in Harare, Zimbabwe, the group has since travelled through Windhoek, Namibia, Oman and Qatar, from where they could secure a direct flight to Ireland.

The flight from Doha was due to land just before lunchtime on Tuesday.

Though the Government has not yet legislated for the return of hotel quarantine, Cricket Ireland has decided to pay for the group to stay in a hotel for 10 days before returning to their homes.

The Irish Times understands that staying in the hotel is an opt-in decision for those whose living situation makes it difficult to undertake a strict home quarantine. It is not compulsory for anyone to stay in the hotel, though it is expected most of the group will do so.

If Government mandated hotel quarantine does return after Tuesday’s cabinet meeting, such a measure most likely will not come into effect in time for the side’s arrival.

Once in the hotel, all involved will undergo PCR tests on day two and day eight of their quarantine – the day of arrival (Tuesday) being day zero. Multiple rounds of testing have also taken place before arriving in Dublin.

Provided they return negative tests on day eight, everyone will be free to return to their homes on day 10, including those who will cross the border into Northern Ireland.