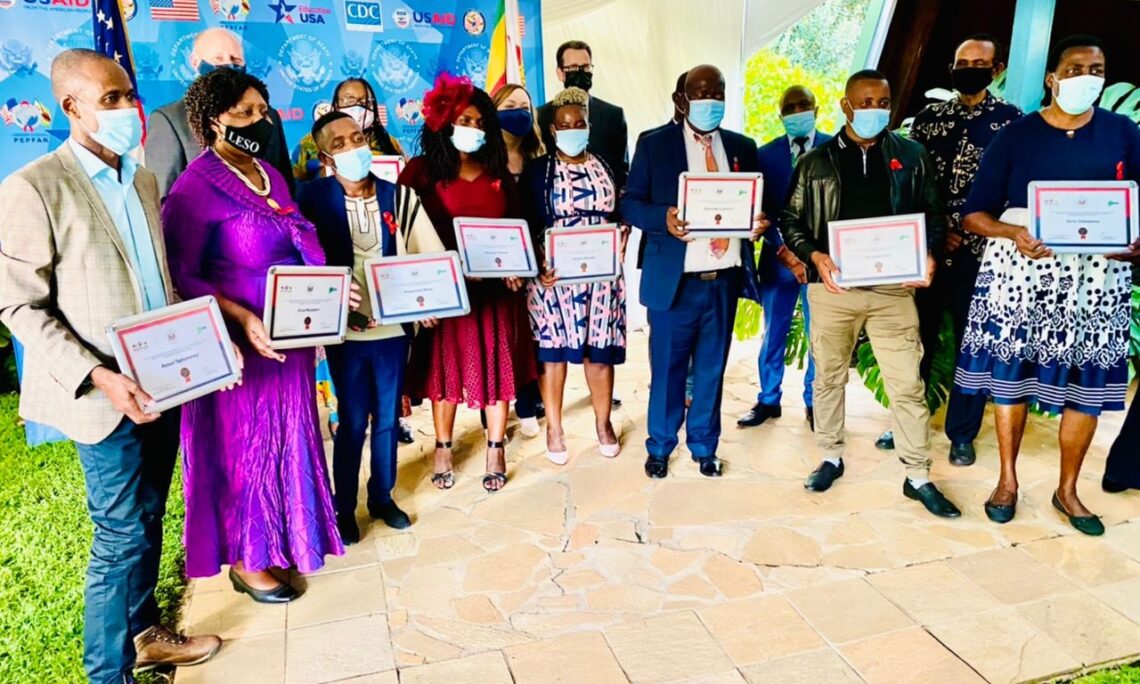 HARARE, November 29, 2021 – The United States Embassy in Harare has recognized 12 PEPFAR Heroes who have made a significant impact in the response to HIV and helped put Zimbabwe on the path towards epidemic control.

The U.S. President’s Emergency Plan for AIDS Relief (PEPFAR) honoured the 12 Zimbabweans who the public nominated and voted on earlier this year.  PEPFAR partners with the Zimbabwe National Network for People Living with HIV (ZNNP+) on the PEPFAR Heroes project.

Chargé d’Affaires Thomas Hastings called the 12 individuals “model citizens” and awarded them with a certificate during a reception in Harare.

“These individuals have gone above and beyond their routine jobs and have shown commitment, passion and courage in serving Zimbabwe’s communities. PEPFAR Heroes inspire us all to work towards an AIDS-free generation.”

The U.S. Embassy made a nation-wide call Zimbabweans to nominate members of their community who had done extraordinary work in the response to HIV. More than 100 amazing people received nominations. PEPFAR instituted a five-member adjudication committee with representation from the private sector, civil society, UNAIDS, and media. This committee selected the best 20 potential heroes with the final selection done through endorsements from community members, as well as through public voting.

Each hero received a cash award from ZNNP+ for the execution and improvement of current HIV-related work as per submitted work plans. PEPFAR will feature the Heroes in a 2022 calendar, as well as in social media posts each month of next year. PEPFAR will also produce a Heroes documentary split into short segments of 1-5 minutes for easy sharing through social media.

Launched in 2003, PEPFAR stands as the U.S. Government’s initiative to support partner nations around the world in responding to HIV and AIDS. The largest commitment by any nation in history to combat a single disease internationally. PEPFAR provided $163 million in FY 2020 and committed $230.3 million in FY 2021 and $213.2 million in FY 2022 to support Zimbabwe’s efforts to achieve HIV epidemic control in line with the UNAIDS 95-95-95 targets. The U.S government has invested $1.7 billion dollars in Zimbabwe since 2006 to strengthen health systems, and the delivery of a comprehensive package of HIV care, treatment, and prevention activities in the highest burden districts so that Zimbabweans can live longer and healthier lives. Through PEPFAR support, nearly 1.2 million Zimbabweans receive lifesaving antiretroviral medicines every year and more than 785,000 young women and girls receive HIV prevention, treatment, care, and support to help them reach their full potential.

Chipiwa Mugabe, 47, founder and serves as the executive director of Space for Marginalised Groups in Diversity in Zimbabwe Trust (SGDZT) that focuses on the health and rights of adolescent girls and young women. Mugabe, who has lived with HIV for 22 years, has a lot to teach young people. “We started when there was no treatment, using herbs and cotrimoxazole to boost our immune system. Some of the HIV treatment was coming to Zimbabwe from the United Kingdom through our relatives who were in diaspora.” Mugabe now engages youth to help them understand the policies that safeguard and promote gender mainstreaming. She has helped advocate for key populations rights, and helped draft the Zimbabwe Key Populations Implementation Plan. She has also worked to increase the viral load testing through campaigns and advocacy. “I am a bold and progressive activist for Sexual Reproductive Health Rights and gender equality in Zimbabwe. I am a human rights defender,” she says.

Godfrey Musuka, 50, has dedicated his career to shedding light on the HIV epidemic through data. In his current position as Country Director for ICAP, Musuka has led the first and second Zimbabwe Population-based HIV Impact Assessment (ZIMPHIA) surveys. The 2020 survey revealed the country has now met the second and third of the UNAIDS 90-90-90 targets and is on track to ending AIDS by 2030. “My passion is data,” says Musuka, who would next like to conduct a small poll to better understand the impact of COVID-19 on people living with HIV. What will his legacy be as a PEPFAR Hero? “I hope people will appreciate the role of data in the national response.”

Gumisayi Bonzo, 51, lost three of her siblings to AIDS due to lack of information and self-stigma. Since then, she has made it her business to be fearless, fight stigma and do everything she can to save lives. Bonzo directs TRANSSMART TRUST, a group advocating for affordable health services and human rights of Zimbabwe’s transgender and intersex communities. She also works with female prisoners and sex workers to ensure they have access to HIV testing, treatment, and PrEP (pre-exposure prophylaxis). Bonzo, who has lived well on HIV treatment for 20 years, is now a role model for many of the key populations she serves. “I want them to know that being HIV is not a death sentence,” she says. As a hero, she would like to be remembered “as someone who fearlessly stood up” for the underserved populations.

Nkululeko Luphahla, 57, has helped thousands of people living with HIV enroll in the treatment program. Luphahla has lived with HIV for 16 years and now serves as the Executive Director of the Lupane AIDS Network. He calls himself a “voice for the voiceless” and served as a substantive member in the Country Coordinating Mechanism for the Global Fund, helping ensure oversight and accountability of the Fund. He pioneered a home-based care program in Lupane District and has reached prisoners, key populations, and young people in need of support. His plans for 2022 include fundraising to build an orphanage for his community. “I hope to be remembered in the battle against HIV long after Zimbabwe has won.”

Robert Tapfumaneyi, 47 and a freelance journalist, uses his craft to shed light into many corners of Zimbabwe to tell the story of HIV, key populations and marginalized communities. During COVID-19 lockdowns, he reported on difficulties faced by clients and pregnant women in accessing health facilities and HIV treatment. He has profiled sex workers and other key populations whose stories are often overlooked or censured because they are considered taboo subjects. He has also tackled myths about HIV that could increase vulnerability to the disease. “I believe my reporting and tv programs also helped in shifting a mindset of policy makers, health stakeholders and ordinary people,” he says. Tapfumaneyi has won several awards in the health arena, including 2015 HIV and Gender Reporter of the Year, 2017 HIV and AIDS Reporter of the Year, and 2020 Online Best HIV Reporting.

Simplicio Chilo, 35 and from Zaka Jerera Village in Masvingo Province, found his inspiration when his father tested positive for HIV in 2001. “My father was one of the first people in our community to accept HIV and encourage others to get tested.” In 2003, Chilo formed the first AIDS Free Generation Club at St. Joseph High School. Since then, he has taught and influenced youth through peer support groups and HIV campaigns at Masvingo’s colleges and universities. He formed WhatsApp groups to support tertiary students living with HIV and connected them with services. He mobilizes students to talk openly in campus radio programs at Great Zimbabwe University. Chilo now sees himself as a role model – like his father before him – for young people who have the passion to work in the national response to HIV.

“Being born with HIV in 1992 and not knowing my status until I turned 14 has been the biggest hurdle I have overcome,” says Phakamani Moyo, now aged 29. Moyo, who started antiretroviral treatment (ART) in 2009, is a role model to many young people born with HIV, helping them to accept their status and live positively on ART. He is a peer counselor with the Paediatric Adolescent Treatment Africa (PATA) at United Bulawayo Hospital. He also sits on the PATA Youth Advisory Board and the International AIDS Society Stigma Advisory Board advocating for youth-friendly HIV services. “I want people to know that being born with HIV is not a death sentence but a new beginning,” he says, adding that he uses his personal journey to advocate for the inclusion of boys in HIV and sexual reproductive health programs.

Olive Mutabeni, 60 and the Founder and Executive Director of Life Empowerment Support Organization,  provides treatment literacy for people living with HIV (PLHIV). Mutabeni, who has lived with HIV for the past 19 years and has been on antiretroviral treatment for 12 years, shows no signs of slowing down on the oath she made to save lives. “As a nurse living openly with HIV, I inspire a lot of people to know their HIV status and get on and stay on treatment.” She dedicates most of her time to encouraging PLHIV to form support groups and help each other access HIV-related information and services. Mutabeni is a devoted advocate for the strengthening of referral pathways for orphans and vulnerable children in need of other services such as school fees and birth certificates. “My legacy is for PLHIV to sharpen life skills, gain self-reliance and enjoy quality of life.”

Margaret Cement, 45 and works in both health facilities and communities for Zim-TTECH, is an avid advocate for the prevention of mother-to-child transmission of HIV and shares her own life experiences for the benefit of fellow women living with HIV. After testing HIV positive in 1998, she started on antiretroviral treatment in 2003 and later delivered 3 beautiful, HIV-free children with the eldest now 18. “My greatest accomplishment is giving birth to an HIV-free baby! Now, my greatest passion is sharing this success with child-bearing HIV-positive women,” she says. Cement hopes to see Zimbabweans shunning stigma and discrimination that prevents people from accessing services. “Let’s be responsible citizens and support each other to prevent new HIV infections.”

Tariro Chikwanha, 59, has dedicated her career to pioneering projects that improve the lives of people living with HIV in Chitungwiza. In her current position as the Founder and Executive Director of the DREAMS HIV and AIDS Youth Network, Chikwanha was the first person to form support groups in Chitungwiza in 2000. She also established the first greenhouse project in Chitungwiza dedicated to healthy living. “I am passionate and dedicated to empowering youth infected and affected with HIV to be more responsible in their decisions” As a PEPFAR hero, Chikwanha hopes to “leave behind an HIV and AIDS free generation which is healthy and empowered in Greenhouse Urban Smart Farming and strengthen their livelihood options.”

Senzeni Chidziya, 56, has lived with HIV for the past 18 years and  is also one of the many people living with an undetectable viral load. In her current position as Director of Susceptible Iyanai Chinoda Organization, Chidziya dedicates time to helping defaulters get back on treatment and continue monitoring the virus in their bodies. “My viral load is no longer detectable because I adhere to treatment. As you can see, I am healthy.” Attaining an undetectable viral load is evidence of the efficacy of antiretroviral medicines for People Living with HIV (PLHIV). What will her legacy be as a PEPFAR Hero? “PLHIV should stay on treatment, monitor their viral load, and keep healthy in order to focus on acquiring livelihood skills.”

Ticharwa Masimira, 69, founded the Midlands AIDS Service Organization (MASO) and, though retired, is remembered always for pioneering projects for the benefit of people living with HIV (PLHIV) over the past 20 years. He authored Zimbabwe’s very first “Stories of Courage” which was a book profiling the lived experiences of PLHIV. “I established Zimbabwe’s very first HIV/AIDS Community Centre, MASO in Mkoba, Gweru, which created opportunities for communities to learn how to respond to HIV/AIDS.” MASO is still serving communities today and Masimira is confident that people will continue to emulate the model of care for the benefit of PLHIV. “Nothing is impossible because learning is a process,” concludes Masimira.