Is Zim govt anger at Brian Nichols due to jitters

As sold a dummy by SADC over anti-sanctions solidarity?

Source: Is Zim govt anger at Brian Nichols due to jitters – The Zimbabwean 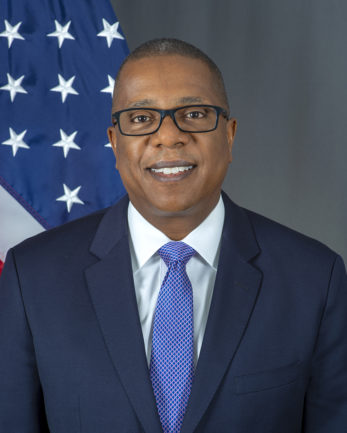 The escalating attacks on the United States of America ambassador Brian Nichols by the Zimbabwe government – most recent of which was notably a thinly veiled threat, possibly of expulsion from the country – have left me wondering why the sudden upsurge in this vitriol considering that nothing that the diplomat has said is new, as these have always been his predecessors’ usual sentiments.

Nichols is largely reported to have poured cold water on the recently flopped anti-sanctions marches organised by Harare, reiterating his country’s long held view that targeted sanctions imposed on some 141 top government officials and entities accused of involvement in corruption, electoral fraud, and human rights abuses, had nothing to do with Zimbabwe’s dismal economic performance – but, instead this had everything to do with rampant and unchecked corruption, poor economic policies, incompetence, political instability and human rights abuses.

There is absolutely nothing unique with such statements emanating from a US diplomat stationed in Harare ever since the imposition of the targeted sanctions – as the world superpower always sought to dispel persistent allegations and accusations by the Zimbabwe government, which has blamed the restrictions for nearly everything that has gone wrong in the country.

So, what has poor Brian Nichols done differently that has warranted this harsh response and set guns blazing from nearly every corner of the ruling establishment?

Quite frankly, I do not believe that he has done anything differently or substantially more severe than his predecessors, but that something else more catastrophic to Zimbabwean authorities has taken place at this same time. Something that has seriously shocked them, thereby sending jitters down their spines – resulting in them lashing out at the only person they could scapegoat.

In fact, if I am not mistaken his statement was nothing more than a tweet – a mere 160 characters.

The first thing to rattle the regime was the unexpectedly poor turn out at their much anticipated 25 October 2019 ‘SADC anti-sanctions day march’, which – given the $4 million injection, incessant massive propaganda campaigns in state media, 100 free buses, and a train, to ferry marchers from all corners of the country, a music gala graced by popular musicians, a soccer match pitting the country’s top teams, free fast foods for every participant, and of course, the usual intimidation – shockingly managed to fill up only about 10% of the giant 60,000 seater National Sports Stadium.

Similar pathetic attendances were recorded at other provincial gatherings throughout the country.

That, surely, would have been more than enough to send shivers down the spines of the ruling elite, as such had never been typical of their gatherings – especially, considering that such tricks as employed for the anti-sanctions march had worked phenomenally before. This would have left them with some pressing questions: “What is going on? What went wrong, and where did we get it wrong? Have the people finally woken up, such that they no longer believe our two decade long lie about sanctions being responsible for their economic problems? If so, how are the people likely to react due to their suffering?”

Such burning questions would be enough to cause even the most hardened person some sleepless nights – and the stress caused can easily make someone lash out at anyone perceived to be the cause of their troubles.

…and that person is unfortunately none other than the US ambassador Brian Nichols!

However, the Zimbabwe government’s problems did not end there – far from it!

When the Southern Africa Development Community (SADC) met in August 2019 for their 39th Summit of Heads of State and Governments, they issued a very powerful communique, which stated that regional countries had unanimously resolved that ‘economic sanctions imposed on Zimbabwe by the US and the European Union (EU) should be removed immediately’, and had also declared that on 25 October 2019 member states would organise ‘various activities in their respective countries on that day to resoundingly call for the immediate removal of the sanctions’.

The SADC executive secretary Dr. Stergomena Lawrence Tax further said that this unprecedented support would be conveyed to the African Union (AU), who would then lead the call for the ‘removal of sanctions on Zimbabwe’ at the 74th United Nations General Assembly in New York.

Understandably, this declaration was enough to embolden the Zimbabwe administration that they had managed to galvanise enough support for their cause, which – I am sure they had hoped – would finally overwhelmingly convince both the local and international communities that they were right all along, and had the numbers to show for it.

The government – during its pre-25 October propaganda marathon – never failed to mention how the regional block was 100% behind this agenda, and that 25 October 2019 would witness a display of this overwhelming solidarity, as member states would ‘organise various activities’ and ‘resoundingly call for the immediate removal of sanctions on Zimbabwe’. We all had visions of massive parades and marches across all the major cities in the region – characterised by thousands upon thousands of placard wielding protestors, songs, fun and fanfare, and speeches by top officials.

That would have truly been ‘resoundingly calling for the immediate removal of sanctions’ – an unequivocal message to the US and EU – something that those in the Zimbabwe administration waited for with bated breath.

However – having heightened anticipation in the minds of Zimbabweans of this impending tsunami of support to sweep through the southern African region – what was witnessed on 25 October was anything but ‘resounding’ – and certainly there was lack of ‘various activities’.

In fact, if what happened in Harare during the $4 million-state-sponsored march was a total flop, then the lukewarm solidarity messages announced by a handful of SADC countries could only be described as ‘historically pathetic’ – as if those member states had competely forgotten about their own August 2019 communique, and had hurriedly scripted the solidarity messages an hour or so before circulating those press releases in their respective capitals on the morning of 25 October!

Similarly, if the dismal attendance at the National Sports Stadium could have caused the authorities sleepless nights, then the half-hearted and apathetic SADC response would have been downright maddening.

Those questions could have so easily flooded and haunted their minds: “Why has SADC not ‘resoundingly’ come out in full force with ‘various activities’ in solidarity with Harare, as promised? Did SADC sell us a dummy with their purported ‘resounding’ support? If so, does it mean that they actually have also seen through our charade of ‘economic sanctions responsible for all our problems’? So, if they know that these problems are due to our own failures, through corruption, incompetence and human rights abuses, what could they actually be saying and planning behind closed doors? Is the US behind this sudden ‘awakening’ of SADC?”

Of course, we should never over-glorify this supposed ‘awakening’ of SADC by this one act of seemingly selling the government a dummy, by pretending to be behind its anti-sanctions call. The fact is still that SADC is still a cowardly grouping that could never stand up boldly against the misdemeanours of a fellow member country – no matter what their true feelings are.

Nonetheless, who in power would not be driven up the wall with such questions gnawing the mind day and night?

Thus, there was need for someone to take the beating for this – and poor Nichols was there for the flogging.

As far as I am concerned those are the real reasons why there are so much unreasonable and concerted attacks on the diplomat. He merely found himself being the unfortunate representative of the country which those in authority in Harare have rather disingenuously chosen to blame for everything that has gone wrong in this country – including, the embarrasing total unravelling of the ‘economic sanctions myth’ in the eyes of the entire world on 25 October 2019.