It’s been one year since Zimbabwe toppled Mugabe. Why isn’t it a democracy yet?

We looked at 232 coups since 1950 to see which ones paved the way for democracy. That gave us the answer.

Source: It’s been one year since Zimbabwe toppled Mugabe. Why isn’t it a democracy yet? – The Washington Post 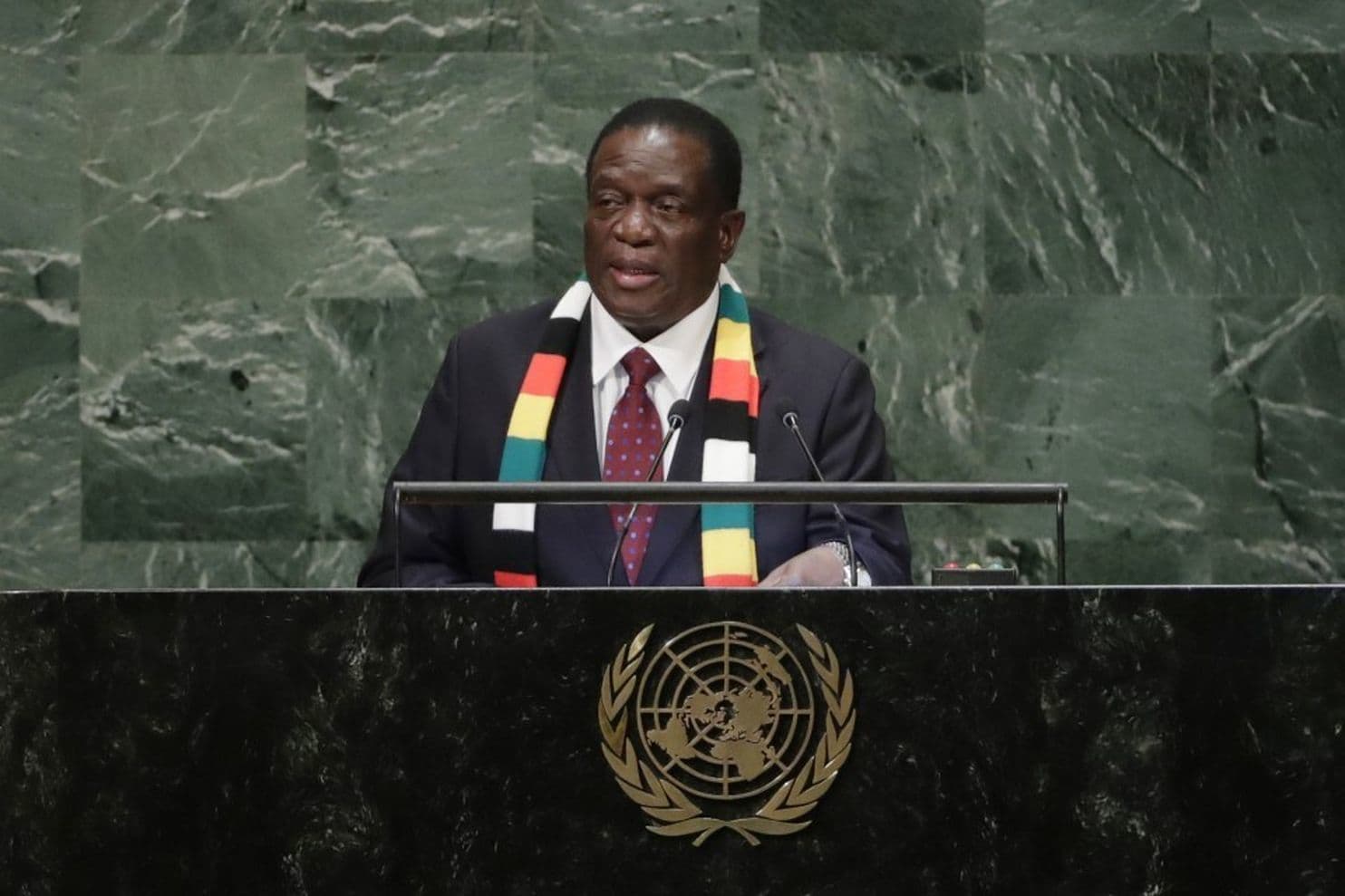 Nearly a year ago, on Nov. 21, the Zimbabwean armed forces toppled Robert Mugabe after a week of attempts to coerce him to resign from the presidency. The coup surprised many observers, as the armed forces had long supported Mugabe’s tenure. Afterward, the coup plotters tried to convince observers, both at home and internationally, that it wasn’t in fact a coup. Rather, their aim was to fix what they saw as Zimbabwe’s deteriorating political, social and economic conditions — or so they tried to persuade the world. For instance, soon after taking power in December, the new president, Emmerson Mnangagwa, promised “free and fair” elections in “four to five months.”

Some observers did indeed hope that Zimbabwe was on the cusp of real democracy. And they had some reason for optimism. Economist Paul Collier suggested a decade ago that coups could sometimes remove dictators, specifically mentioning Mugabe as a potential target. Constitutional law scholar Ozan Varol expanded on this idea in his simply titled book, “The Democratic Coup d’État.” We believe that encouraging coups as a way to promote democracy can be disastrous. However, coups are followed by democracy more often than most people realize, as we will explain below.

Here’s how we did our research

We plotted data from One Earth Future’s (OEF) Rulers, Elections and Irregular Governance (REIGN) project to see how often democracies do in fact emerge after coups.

You can see the results in the figure below. Red lines show 232 coups from around the world since 1950, while the blue lines show coups only in Africa. We also distinguish coups after the Cold War, the end of which is shown as a solid line, from all coups since 1950.

Moving from left to right, the figure shows the proportion of countries in which the REIGN data assesses its governance as democratic, checking every six months after the coup for up to three years following the event. We can see two major trends. The first is that African countries’ democratic prospects after coups are in line with those of the rest of the world — despite the fact that many in the international community view the prospects of democracy in Africa with some pessimism. And that’s true no matter when the coup takes place, before or after the Cold War’s end.

Second, coups are substantially more likely to lead to democracy after the Cold War. That’s especially notable, given how rarely countries shift from autocracy to democracy at all, coups or no coups.

Researchers investigating why coups sometimes lead to democracy have concluded, variously, that successful coup plotters once in power seeking domestic and international legitimacy will sometimes attempt to establish democratic practices such as holding elections. Fewer scholars have paid attention to the effects of existing political traditions and sources of power. For instance, a previously entrenched political party that has ruled undemocratically, like the Zimbabwe African National Union-Patriotic Front (ZANU-PF), may overthrow a particular leader without being willing to step away from power altogether.

That can be a serious obstacle to democracy.

After removing Mugabe, Mnangagwa and the ZANU-PF at first sought to allay fears about the fairness of the upcoming election. The new regime allowed more international election observers than had the old. And the 2018 campaigns were relatively peaceful, when compared with campaigning under Mugabe.

And yet some voters were intimidated and threatened with violence. Those threats were mainly aimed at those who supported Nelson Chamisa, the candidate of the main opposition party, the Movement for Democratic Change. Civil society groups noted that the local media’s campaign coverage heavily favored the incumbent ZANU-PF and scarcely mentioned other candidates.

The biggest shortfall, however, was that the July 30 election itself was conducted in ways that fell short of international standards. The opposition challenged the vote-tallying process, arguing that the ZANU-PF rigged the vote. When protesters gathered after the Zimbabwe Electoral Commission announced Mnangagwa’s victory, police and armed forces fired on them, using live ammunition and killing at least six people, as protesters fought back with stones. Police then raided opposition headquarters, detaining workers for questioning.

International observers suggested that the election results were not credible. Opposition leader Chamisa challenged Mnangagwa’s victory in court, but a ruling by Zimbabwe’s constitutional court upheld the win. The U.S. delegation reported that the country had not demonstrated that it had put in place measures to ensure free, fair and credible elections. The E.U. observer mission identified several difficulties, including a lack of transparency in vote tallying and delays in court hearings for those challenging election results, and concluded that the election did not meet international standards.

[Even after Mugabe, Zimbabwe’s elections do not appear free or fair]

However, observer missions of several African intergovernmental organizations, including the African Union, the Common Market for Eastern and Southern Africa, and the Southern African Development Community hailed Zimbabwe’s election process as “largely free and fair” and representing “a turning point for Zimbabwe.”

Dominant parties often hang on to power after coups

Certainly, the 2018 elections were better than previous Zimbabwean elections, at least in the high voter turnout and calm observed on election day. But it does not appear to have been a turning point toward democracy. Throughout the electioneering period, the ZANU-PF showed that it would still go to great lengths to ensure that it retained power, much like Mugabe and other dictators who manipulate elections.

We’ve found that’s typical for governments that have been dominated by a single political party.

In the figure below, we plot the REIGN data to find how likely it is that different kinds of regimes, if overthrown by a coup, will be replaced by democracy. We found 19 coups against regimes that had been run by a dominant party like ZANU-PF, in which it was the party, not the individual leader, that held power. Of those, only one coup was followed by democracy. 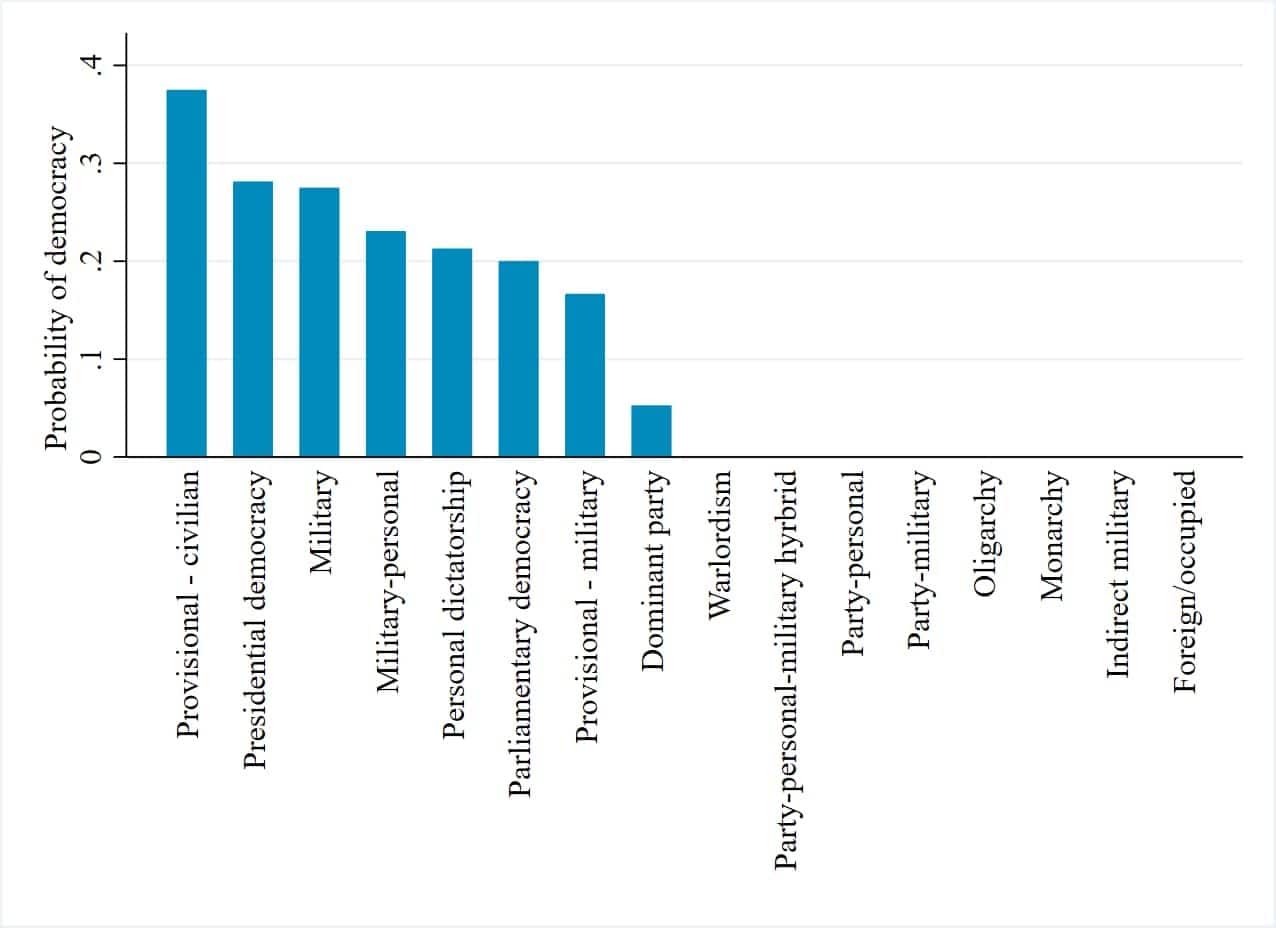 So what kinds of regimes, if overthrown, are indeed replaced with democracy? We found that happened after military dictatorships and those dictatorships where power is disproportionately held by a single person; in countries that were already democratic; or in regimes that were designed to be transitional, such as those following foreign occupation or a civil war.

We also looked at party-based dictatorships that involved the military or dictatorships in which power is disproportionately held by a single individual. We found 20 coups against such governments — none of which resulted in democracy within three years.

In all, of 39 coups against dictatorships that were in some way based on a dominant party, only one — the 1960 coup in Turkey — led to democracy.

When dictators fall, there may indeed be a window in which the nation can transition to democratic rule. But that’s far more challenging if the autocrat was part of a dominant political party that remains in power, like ZANU-PF.