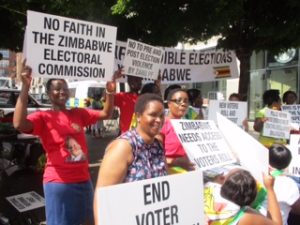 Three weeks to the elections and the only thing that is clear is that Zanu PF still has no idea how to turn around the economy. The state media reports that billions of dollars of investments are pouring into the country and thousands of jobs are being created, but there is little sign of this on the ground.

According to the Herald everything is rosy. But the queues outside the banks continue. The dollar fetches $1.70 in bond coins on the street. The budget deficit is ballooning. As the journalist Edmund Kudzayi says in a piece circulating on What’sApp: ‘The economy is screaming.’ (See: http://www.zimvigil.co.uk/vigil-news/campaign-news/949-whatsapp-from-edmund-kudzayi-07072018).

The reality is that Zanu PF is congenitally unable to understand economics. To them economics equals money equals corruption. The result is there for everyone to see: no economy, no money but endemic corruption.

The corruption has contaminated even Zimbabwe’s saintly civil society organisations. The United States has cut support to several of them, complaining that their bosses had colluded to plunder millions of dollars. (see:  https://www.newzimbabwe.com/trump-govt-pulls-plug-on-zimbabwes-pro-opposition-ngos-cites-gross-plunder-of-cash/).

The situation is so bad that the chair of the Zimbabwe Revenue Authority, Willia Bonyongwe, says corruption within and outside the organization had become so cancerous that it was destroying the fabric of society (see: https://www.newsday.co.zw/2018/07/lets-fight-corruption-zim-is-not-for-sale/).

The general disenchantment with the economy would suggest victory for the MDC in the elections, given a level playing field. But, after so many disappointments, the Vigil has little hope that the elections will not be rigged. We staged a demonstration in London on Saturday in support of an MDC protest on Wednesday 11th July against the Zimbabwe Electoral Commission (ZEC).

The MDC expects thousands of people to take part in a march from Africa Unity Square in Harare to the ZEC offices to press for changes to the electoral process. It is insisting on being provided with a complete biometric voters’ roll and complains that it was not allowed to observe the ballot printing process.

MDC leader Nelson Chamisa said the party had serious concerns over the conduct of ZEC and believed that it was either incapable or unwilling to provide a verifiable, secure and transparent election.