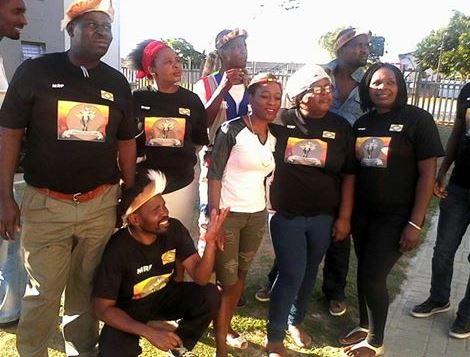 BY SILAS NKALA
TWO Mthwakazi Republic Party (MRP) activists who are serving a three-year jail term each appeared again in court last week and were fined $20 000 each for violating COVID-19 regulations.

Welcome Moyo and Mongameli Xukuthwayo Mlotshwa were fined alongside their other co-accused MRP colleagues Nqobani Moyo, Mcebisi Mgutshini and Calvin Wiseman Dissident Dube for failure to produce exemption letters at the height of the COVID-19 pandemic.

They have been appearing in court since 2021 over the charges.

Moyo and Mlotshwa are currently serving a combined six years in jail for public violence.

According to the State case, the five were nabbed sometime last year without exemption letters in violation of COVID-19 lockdown regulations. Under the regulations, civilians were supposed to have letters from their employers to be allowed outdoors.

Those without exemption letters were seen as not essential services, and were supposed to be confined to their premises to slow down the spread of the global pandemic.

They were represented by lawyer Kwanele Nxumalo, who was standing in for Nqobani Sithole and appeared before Bulawayo magistrate Rachel Mukanga.

MRP leader Mqondisi Moyo last week said the party will appeal against both sentence and conviction.

“Our lawyers are going to challenge the conviction and sentence. You remember that in 2020 a magistrate from Masvingo ruled that demanding the Exemption letters from the members of the public was unconstitutional as he passed the ruling saying the demand of these letters was illegal,” Moyo said.

Newer Post
Zimbabwe can never be Sri Lanka as long as we have citizens who pretend to be brave yet unbelievably cowardly!
Older Post
Interview: Epworth MP Makari explains victory