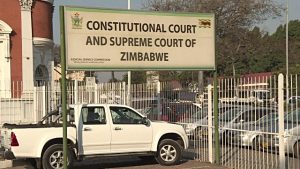 THREE candidates out of the 12 nominated for public interviews for the five vacancies on the Constitutional Court bench have reportedly snubbed the offer.

One more could not make it because he is out of the country. The eight remaining candidates will be interviewed tomorrow in Harare, according to a statement by the Judicial Service Commission (JSC).

Following an invitation to members of the public to nominate persons they think are suitably qualified for appointment to the five positions at the Constitutional Court bench, the JSC received 12 nominations, but only eight accepted the nominations.

JSC spokesperson Rumbidzai Takawira said the other four did not confirm.

“Justices David George Bartlett (Rtd), Charles Hungwe and lawyer Arnold Tsunga have not confirmed their nominations, while Justice Donald Stevenson Corke is out of the country and unable to participate in the interviews,” Takawira said.

“The criterion is, people are nominated but it is subject to their confirming the nomination that they become part of the interview process. They have to confirm that they want to, since they get nominated without consultation.”

Takawira added: “Justice Hungwe said he could not be part of the process, Justice Corke is out of the country, so we cannot do a virtual interview.”

Tsunga confirmed snubbing the nomination: “Yes, I did. I prefer to continue working from a development partner role to increase institutional capacity of rule of law institutions.

“I also plan to work with the Constitutional Court from a public interest litigation perspective to create a stream of cases that help the court to cut its teeth in new areas of human rights law given the expanded bill of rights in our 2013 Constitution.”

He added: “It was a huge honour to be nominated as you can imagine, but I unfortunately turned it down.”