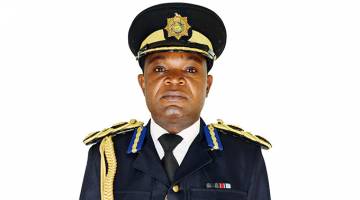 The letter, which was left at the Police General Headquarters (PGHQ) for the attention of commissioner general Godwin Matanga, also exposed how daring officers who busted cartels were victimised, including being dismissed from the force.

He claimed to be one of the victims of the vindictiveness for daring to arrest a Mutare-based white businessman involved in shady gold dealings, working with named top cops, among them two commissioners and a chief superintendent.

Tembo sensationally claimed the two commissioners and the chief superintendent were part of the top police officers allegedly paid a kilogramme of gold monthly to protect the Mutare businessman who is accused of illegally dealing in gold.

The retired top cop said he was deployed to Mutare as assistant commissioner operations in September last year by the Police General Headquarters (PGHQ) when his attempt to try to bust some economic saboteurs backfired, leading to his sacking in March this year.

“I am a retired assistant commissioner, I was attested into the Zimbabwe Republic Police as a Patrol Officer on 08 October 1986,” Tembo wrote.

“I was retired on March 27, 2020. I successfully rose through the rank and file up to Assistant Commissioner with 34 years of sterling service, and during my tenure, I held the highest post of acting chief of staff, human resources.”

“I am a well experienced and senior officer in the policing terrain,” he wrote.

Tembo said he discovered there was chaos when he was appointed assistant commissioner, operations in Manicaland characterised by the existence of illegal gold deals, illegal diamond traders, foreign exchange dealers, smugglers, human traffickers and suspects in externalisation of forex.

“I observed that arrests and detention in this sphere were latent or almost zero,” he claimed.

“I then made a strategy to minimise this rot and I officially tabled the matter to the provincial command. I was supposed to develop a crack team to decisively deal with the menace.”

Tembo said the provincial command agreed to the strategy and he developed a strong team of work horses and the Police General Headquarters operations approved the operations.

“The operations started sincerely. A good number of notable achievements were recorded. Quality arrests and recoveries were registered by the team. A number of service stations selling fuel registered in forex were prosecuted,” he claimed.

“One crucial arrest of a white man (name withheld) of Bless Block Murambi in Mutare was initiated after a tip-off about the illegal gold dealings. Arrangements to arrest him, including applying for a search warrant, were done and a search warrant granted by a magistrate.”

Tembo added that the team proceeded to the residence to arrest the businessman.

“I personally received a phone call from Chief Superintendent (name withheld) and CID HQ who indicated that he had been directed to call me by the commissioner.

“He subjected me to a long and protracted interview concerning the operations of the crack unit. I briefed the protocol commissioner about it. He made consultations and advised me to stop the operation.

“I was discouraged from indulging in such operation following lengthy telephone calls. I communicated this embarrassment to the provincial command.

“I was advised to put a halt to the investigations because some senior police officers had queried the operations. No further investigations were done on the strength of the complaint by CID HQ and PGHQ.”

Tembo said he later discovered that the Mutare businessman allegedly gave a select number of CID HQ top officers a kilogramme of gold on a monthly basis.

“Information at hand indicated that he was a protected blue-eyed boy who gave a select number of CID HQ echelon a kilogramme of gold on a monthly regular basis,” he wrote.

“I then fell out of favour with my colleagues. The team was unprocedurally disbanded by Officer Commanding Manicaland indicating the discomfort by senior officers from CID HQ and PGHQ.”

Tembo added: “All CID members, especially the Border nostro, know all economic saboteurs in Mutare but that is their grazing area. They deliberately protect the saboteurs because they fatten their pockets and hence they don’t entertain investigations by any unit. At one point in time, the majority of saboteurs relocated and vacated on a tip-off by security agents.”

He said it was unfortunate that his dismissal came earlier than he expected and decried the disbandment of the crack unit. Tembo said the unit could have been kept intact to achieve a lot in nabbing criminals bleeding the economy.

“If the status quo is maintained, I doubt if vision 2030 will be achieved,” he said. “A new set of measures are urgently required to address this menace before the economy collapses. The majority of corrupt officers survive on protecting the economic saboteurs at a price.”

National police spokesperson assistant commissioner Paul Nyathi said he was not aware of the document.

“I am not aware of the letter or that document, unless it was addressed to a particular department,” Nyathi said.

Mnangagwa’s government is battling against corruption and many observers say the fight against the vice was a lost cause because of graft within the police force itself and other institutions set up to deal with the scourge.

The Zimbabwe Anti-Corruption Commission has been accused of fighting political battles after failing to secure convictions on most cases they deal with, with observers also alleging selective application of the law.

An special anti-graft body in President Emmerson Mnangagwa’s office, the Special Anti-Corruption Unit, has also been accused of corruption.